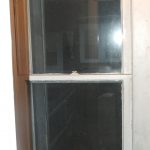 Last year my wife and I purchased an older home with the intention of fixing it up, and, well, it’s been a slow process. I’ve painted and in some cases repainted everything, and we’re about 75% through the job of updating the wiring from the old knob and tube.  For the most part it’s still an old house in need of some TLC. It’s drafty and because of our geographical location, it is always very humid, especially in the summer.

High humidity and the fact that neither bathroom has a fan, which as you can imagine creates a multitude of disadvantages, leads to a constant battle with mold. Unfortunately, it got the better of us in the seldom used downstairs half bath, and I am sad to say that we lost our curtains to it.  It was a beautiful ceremony though, and thanks to all who sent flowers. Instead of installing new blinds or curtains or, as I suggested, leaving it au naturel (there is no shame in my game), we decided to try installing Gila Window Film in the two windows.

Ultimately the choice worked perfectly.  We have nice window coverage, and no one can see me in all my wonderful hairy glory in the wee hours of the morning. However, getting to that point was a bit of a mess, and to be fair it was entirely all my fault. Well, I won’t take the blame for the shape of the window though. Since the house is ancient, there are multiple layers of cracked paint that in some places on the frame managed to ooze up, down and sideways onto the pane of glass. This had to be scraped off and the window had to be cleaned over and over again.  Maybe that part was my fault.

Here’s a quick note: Sold separately is a tool kit that helps you.  I’m telling you, you really, really need it in order to install the film. Among some of the other equipment is a bottle of spray applicator that helps the film adhere to the window and diminishes the static cling as you prepare to install it. It is also the recommended solution to clean the windows (as opposed to the ammonia based cleaner that I used before reading the instructions).

Speaking of reading instructions and labels and such, read the sizing information before you leave the store. A roll covers one large window or apparently one and a half small windows with enough pieces to finish the bottom half of the second window. Also when it says two people needed, it’s more of a mandatory item than a suggestion. You see, trying to peel the backing off the roll by yourself is nearly impossible without crinkling the film.  Also, two-year-olds, as sweet as they are, do tend not to understand the concept of pulling with both hands while Daddy holds the film.

Another clever tip: You may want to measure each pane first and then cut straight lines that are just a tad larger than the actual window size, instead of eyeballing it. I suppose I should take my own advice.

The Trick to Applying the Film to Your Window

After these steps, you’re nearly home free. Spray some applicator spray on both the window pane and film and begin placing the film on the window. Because of the fluid on both parts, the film will suck toward the pane and you may have to pull it off and on several times before you get it to sit right. When you get the film where you want it, use the knife in the tool kit to cut the film to the right size, which will leave a slight gap between the film and window to allow for expansion. Finally, use the accompanying squeegee to smooth the film and remove any air bubbles – and voila – pee-pee privacy. The nice thing is that the film is supposed to last up to 10 years and comes in a variety of colors and patterns including shaded for windows on the sunny side of the house.  Just remember, read the directions or watch the installation video before you get started.