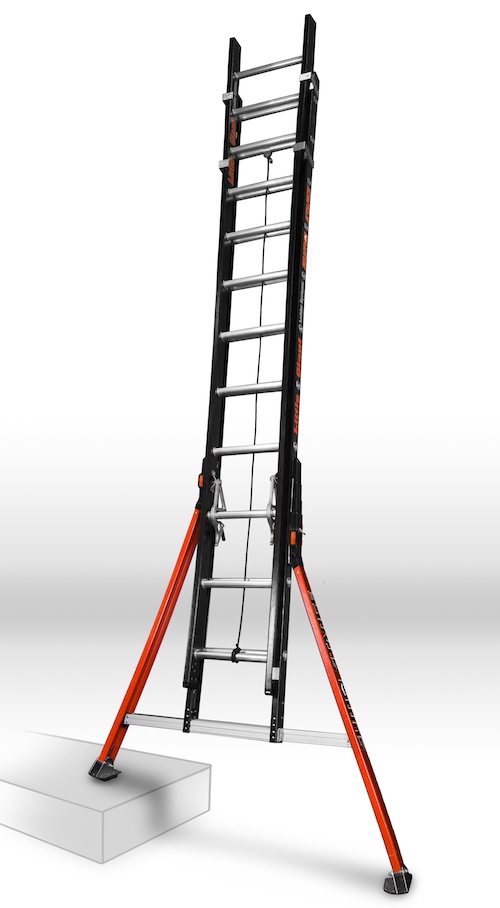 Quick! What do you think of when you imagine a Japanese Sumo warrior? After reading this review, you might start thinking about a safer spin on extension ladder design. Little Giant sent us one of their new Sumo Stance models after we saw the ladder demonstrated at a trade show last year. At first glance you might mistake it for a regular extension ladder, but closer inspection of the details reveals this Sumo warrior of the ladder world has a few tricks up his thong. Yes, I really did just make a Sumo/Ladder/Thong connection!


These key safety innovations make for a footprint three times as wide as the actual ladder. According to Little Giant’s crack team of physicists, that translates to a 500% increase in side-tip stability. We recently had a roof repair project that required a lot of ladder climbing. Actually it went from roof repair to rebuilding the top of our brick chimney which was falling apart, but I’ll save the details of that for another article. The access point to the roof and chimney was a sloped section of tile roofing. The most accessible point of that area was the lower section of the roof. With a traditional extension ladder, there was a risk the ladder could slip down the sloped edge and off the corner of the roof. Definitely not OSHA approved, and probably not a fun ride down. As we’ve stated before, it’s not the fall you need to worry about, but the landing. Before our stucco pro started climbing up to the chimney with buckets of stucco on his shoulders, I set up the Sumo Stance. The outriggers kick out easily with a squeeze of the release trigger on each side of the ladder. Once the outriggers are out, a pushbutton mechanism lets you ratchet the outriggers down to get things level.

Dual levels provide a quick gauge of whether you’re leaning left or right, and whether you’re at a proper angle in terms of how much lean is in effect, front to back. In the Little Giant video above, you’ll see a red/green safety indicator for the forward/back lean, however that’s been replaced by a second level in the current models.

While HomeFixated’s legal team says you should always follow manufacturer recommended safety standards, I actually find sometimes some on the job-site modifications can improve safety. When I was testing the Sumo Stance, there were a couple instances I found the lean angle suggested by the level a little too shallow (in other words, the sense that if I leaned back too much on the ladder it could fall backwards). In those particular instances I actually opted for a little extra lean. Too much lean of course, and you put more strain on the middle of the ladder and also risk the base of it slipping out from under you. After thinking about the issue, it dawned on me that how much standoff from the wall at the base will depend on how extended the ladder is. Since the level bubble targets a specific angle you’ll wind up with less standoff from the base of the wall unextended vs. more standoff from the base of the wall with the ladder fully extended. Regardless of what ladder you’re using, you’ll want to make sure you have a safe lean angle and a nice solid, very grippy surface for the feet at the base of the ladder. 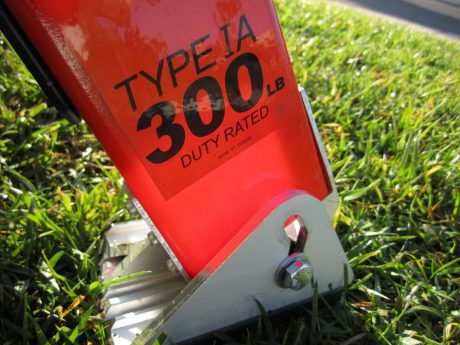 Just like a house is only as good as its foundation, the feet at the base of any ladder play a key role in stability and safety. Some of the older extension ladders I have seen have feet that look more like ice skating blades than stable points of contact with the ground. Not so with the Sumo Stance. Nice, wide, heavy-duty contoured metal feet pivot at its base. Those feet are then covered with a very grippy rubber sole (complete with Sumo branding for people like me who happen to be looking at the bottom of the ladder). We found the feet to provide a reassuring grip on dirt, concrete and even not-so-recommended grass. The feet also flip up to expose jagged metal designed for gripping ice (not something we tested here in San Diego). We have the luxury of not setting the ladder on a surface known for its slippery qualities. The sure-footed Sumo Stance is practically wearing work boots, or with inclement weather in ice-mode, mountaineering crampons.


Thoughtful little details abound on many Little Giant products, including the versatile Select Step we reviewed a while back. The Sumo Stance is no exception. One cool detail is that they took the time to mark the balance point for carrying. Here’s how carrying an extension ladder normally goes: you eyeball the center point, grab and lift, and then watch one end slam into the ground like an America’s Biggest Loser contestant jumped onto a seesaw. Since the balance point is noted with a decal, it might wear off over time. . . but you’ll be happy it’s there every time you go to lift the Sumo Stance.

Don’t be That Guy (or Gal) On the Top Rungs


Yesterday I was running an errand and stopped briefly to marvel at a sign installer carefully balanced on the top rung of his ladder. By “carefully balanced” I think I actually mean “stupidly unbalanced.” He also was not roped off. Once you get your center of gravity off to the side of a ladder or above the ladder, very bad things are much more likely to happen (including death). Little Giant recognized the predisposition some people have to ignoring warning labels and made the top two rungs bright red to deter trespassers. As my four year old says, “Red means stop.” It’s another thoughtful nod to extension ladder safety that hopefully users will listen to.


Extension ladders are notoriously heavy. The Little Giant Sumo Stance actually incorporates their Lunar light-weight extension ladder, offering Litewave™ technology which Little Giant touts as “the lightest non-conductive fiberglass extension ladder in the world.” By using a ultra-top-secret fiberglass and resin combination, along with many geometric and not-so-top-secret cutouts in the frame, a lighter extension ladder is achieved. I compared weight of the Sumo Stance directly to another conventional 24′ extension ladder from Louisville. My scale wasn’t the most accurate in the world, so these numbers might be slightly off, but the relative difference should be close. The Louisville 24′ extension ladder weighed in at around 51 pounds, and the Sumo weighed in at around 54 pounds. Considering the outrigger mechanisms and the pole rung and cable hooks (which were not present on the Louisville), the Sumo is a very manageable weight despite its additional features and hardware. The Lunar sans outriggers would clearly weigh in well below the weight of the Louisville.


Are you regularly working on telephone poles or cable systems? If so, you’ll be happy to know the Sumo Stance has an optional telephone pole brace/cable hook. Since I didn’t want to get arrested or electrocuted, I opted not to test these particular features, other than to check the folding mechanism of the cable hooks. The hooks are spring-loaded and fold out and lock into place smoothly. The pole/hook option adds a minimal amount to the cost of the ladder ($30-$50 depending on the model), so if you’re at all likely to need either or both, it’s worth adding. On the other hand, if you’re not likely to use them, leaving them off will shave a bit of weight off the overall ladder weight.


For the most part, the Sumo Stance stowes and transports like any traditional ladder, with a couple minor exceptions. The most obvious is that several feet of length at the base of the ladder are wider than the rest of the ladder thanks to the outriggers. For most ladder racks this shouldn’t be an issue, but if you happen to have a rack with just enough width for the main frame, be aware of the increased girth at the base. If you’re used to setting your ladders on their side on hard ground, that’s a habit you’ll probably want to break with the Sumo Stance. The release levers for adjusting outrigger height are metal and stick out from the sides. If you need to lay the ladder down on a hard surface, we recommend laying it flat to avoid damaging the lever (or the floor for that matter, if it’s a finished surface).

Animated Sumo Battle
I know what you’re thinking, “All these details about the Sumo Stance are very helpful, but what if I can’t make a purchasing decision without an animated video of the ladder in an actual Sumo battle?” Fear not! Little Giant (or an ad guy with too much budget) has you covered with this dramatic battle between a Sumo warrior and the Sumo Stance Ladder:


According to Little Giant, “In 2007,approximately 532,000 people were treated in hospital emergency rooms, doctors’ offices, clinics and other medical settings because of ladder related injuries.” Even if current stats are better (they might be worse), that is a lot of injury. The Sumo Stance represents bold and innovative progress in making something inherently unsafe substantially safer, and for that we applaud them. Rather than crank out another typical extension ladder, Little Giant has brought a safer option to the market. With extension ladders, instability and danger seem to grow exponentially the higher you are. When I’m doing work on our two story home and am near the top of a 24′ extension, I like the stability and reassurance of a wider ladder footprint that has been carefully leveled. What might appear to be a tiny lean from ground level can translate into a dangerous lean higher off the ground. The Sumo Stance helps keep you level, properly angled front to back, and less likely to shift or fall left or right.You’ll still want to observe basic ladder safety, but using the Sumo Stance properly will go a long way to keeping you safer.

Is Little Giant Sumo Stance more expensive than the typical extension ladder? Most definitely. With the number of accidents that occur on ladders, we think paying more for safety is often a good investment in your own safety, or the the safety of your employees. Regardless of how often you use an extension ladder, how much would you pay to prevent just one ladder mishap that results in serious injury or worse? For more details, visit SumoStance.com. The Little Giant Sumo Stance is currently available direct from Little Giant Ladders in Type IA and Type IAA rated 28 foot length with a suggested retail roughly $900-$1000 depending on rating and pole v-rung/cable hooks option. 16 and 24 foot versions are coming soon and retail on those will be in the $625-$850 range. The model we reviewed was a 24 foot version.