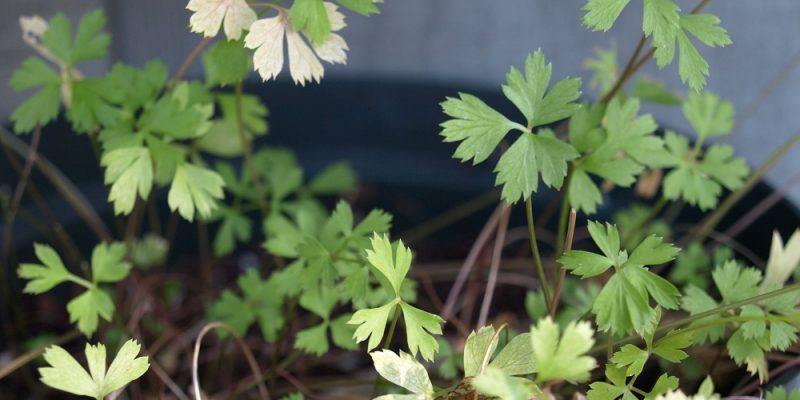 We all know the song, a traditional English ballad that was adapted by the Beatles as well as the duo of Simon and Garfunkel. However, gardeners might not always be equally familiar with the plants that are mentioned in the melody – Parsley, Sage, Rosemary and Thyme. So, without further ado, here are the stars that remain from the long ago fair, (if it was ever actually held, of course), and some tips on how to grow them in your herb garden and even a couple tips on using them in your kitchen.

Like most herb plants, parsley is good source of useful nutrients. I simply haven’t discussed it much in previous blog posts because of my limited experience with it. However, I have been growing parsley for over 6 months so now I can safely report on my observations. I’ve noticed that this plant likes a moderate amount of water on a regular basis. Mine is currently living on the unheated front porch area against a house wall. Even so, parsley seems to be fairly tolerant of mild freezes. This plant also does okay in a set up where it gets strong morning sun and shade in the afternoon. Gardeners should be aware that, unlike the other herbs in this group, parsley is a biennial and only lives for two years at best rather than several. It has to be continually replanted if it’s being regularly eaten, since it won’t grow back. Of course, if nobody harvests it, the plant will stay alive until it is needed, which is always a good thing. 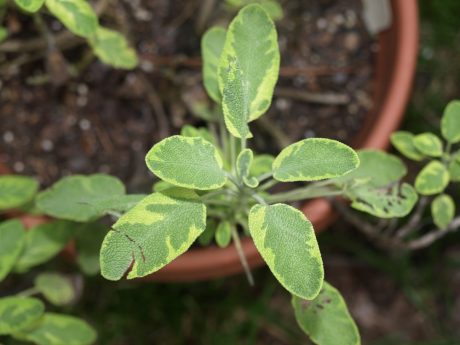 I have a long and turbulent history with members of the sage family. They always die back for winter just about the time I start craving turkey stuffing and tomato soup. Obviously, the best way to solve this problem would be to dry the leaves in advance for this purpose but I never seem to remember to do so. My other complaint with sages is that some varieties have pretty flowers and allegedly edible leaves but are just not worth the effort in my humble opinion. Pineapple sage, I’m looking at you! This plant has to be watered twice in the summer or it looks as ragged a jogger after a marathon run. A lot of the sage species, particularly the decorative varieties, also tend to get too large for most containers in hurry. I’ve nonetheless had a lot of success with the Iceterina type (shown above). It doesn’t have to be watered overmuch and it doesn’t often mysteriously die over the winter when it is supposed to be dormant. 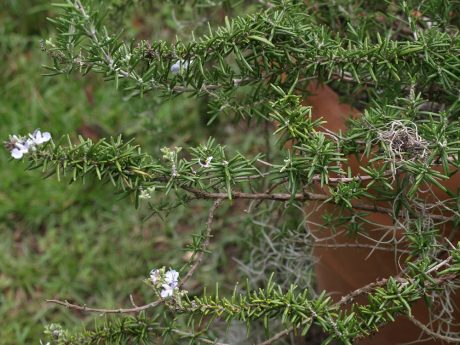 As Home Fixated readers probably have heard before, rosemary is an low maintenance herb that isn’t much bothered by pests. This plant can serve a lot of different purposes but it is best known for its culinary virtues. Thick wands can be cut from large, shrubby bushes to use as shish-kabobs, but even smaller pieces can lend a nice touch to cooked meats and other dishes. I particularly like to throw rosemary trimmings in the fire when grilling hotdogs because doing so gives the meat a more savory taste.

Here in zone 8, this plant is an evergreen perennial. If you’re lucky it may bloom most of the year. Rosemary will even form nicely sized, scented hedges if it is planted in spots where there is good drainage. However, in spots where the water pools up, this herb is probably best grown in terracotta containers. I’ve found that the best mulch for this plant is either washed playground sand, regular gravel, or small, broken bits of terracotta. Any of the aformentioned items will help improve the drainage around the plant and reduce the risk of root rot. 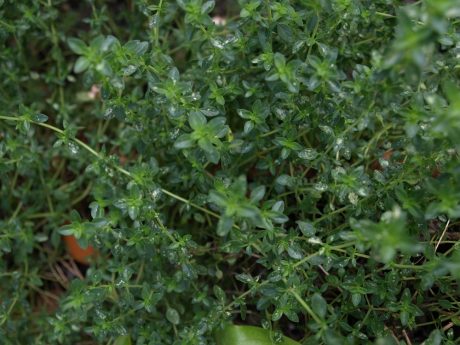 Thyme is probably the plant that is most likely to mysteriously drop dead over the winter. This plant gets along fine until it supposedly goes dormant in the fall. Hypothetically, it should come back in the spring but often fails to get with the program and return at all. This condition seems particularly noticeable in French, English, and lemon thymes. The latter has mosquito repellant qualities and is very good in chicken dishes, so I usually replace the dead ones in the spring. Even so, I’ve mostly given up on trying to make the other two types flourish for more than a season. So far, the pink chintz thyme or the orange thyme haven’t suffered from this condition at all. I’d definitely go with the latter if you are looking for an edible type of thyme to use in your cooking or the former if you have good drainage in your yard and want a nicely scented groundcover.