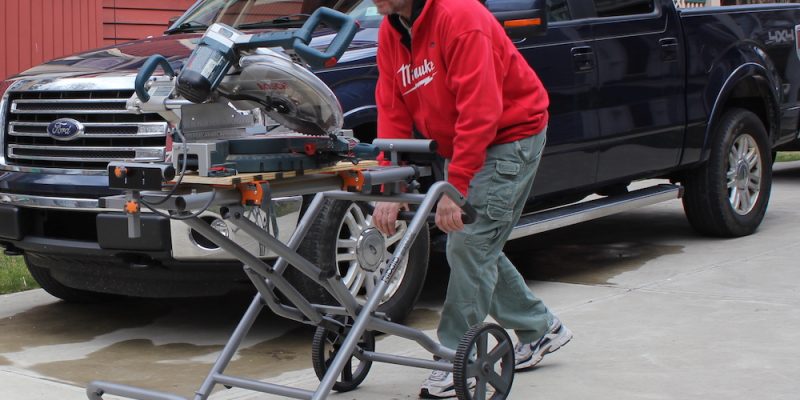 One of the staple tools for pretty much every framing and finish carpenter is the compound miter saw. These saws provide the ability to make fast, accurate cuts, whether trimming studs to length or putting a fancy schmancy angle on a rafter or a piece of crown molding. The only downside is that many of the better-quality saws are HEAVY. My Bosch 5312, for example, does a great job, but it’s a BIG sucker. It’s large and pretty awkward to lug around, and weighs in at a decidedly unsvelte sixty-plus pounds. Even for an incredibly strong guy in peak physical condition, like myself, schlepping something that big and awkward around can wear you down. When Ridgid offered us the opportunity to try out their newest MSUV (miter saw utility vehicle), the Ridgid Miter Saw Stand – MSUV AC9946, I told ‘em to roll it right over here. The FedEx driver was not amused.

The Ridgid MSUV AC9946 is an update of a product that’s been around for a while. It will be replacing the very highly-rated Ridgid MSUV AC9945. With bigger wheels and a wrap-around handle, the new model is even easier to move around bumpy construction sites, or (my favorite) up and down stairs. Here are the specs from Ridgid:

• Compatible with most sliding and compound miter saws
• Quick-release mounting brackets for easy installation/removal
• One-step set-up with foot pedal
• 9-1/2 ft. overall extension length for longer materials
• Repositionable 12 in. wide work support
• Built-in material stops make set-up for repeated cuts easy
• Multi-grip transportation handles for comfort and balance
• Saw can be positioned from one side of stand to the other
• Large wheels, rubber feet for stability and storage tray for accessories
• Weight is 65 pounds

It took a bit under an hour to assemble the Ridgid MSUV AC9946. It would have been faster, but a combination of less-than-stellar instructions and crappy old-guy eyes conspired against it. It’s really pretty straightforward, though, and with better instructions – or if I had to do it again – it would be about a 15-minute job. Everything comes in one (heavy!) box, well protected with foam packaging.

The first thing I noticed was that everything on this unit is beefy. The frame is very sturdy tubular steel, the quick-release clamps are solid and substantial, and the wheels seem like they’ll stand up to real-world abuse. I have a much older version of the MSUV, which I keep at our farm with an old Craftsman sliding miter saw on it. It’s not as quick and easy to operate as the Ridgid MSUV AC9946, but it is also very sturdy, and has held up through many years of use.

Once I had the stand assembled, it was time to attach the Beast (the Bosch 5312) to the quick-release clamps. These clamps allow you to very quickly install (or uninstall) the saw or other tool to the Ridgid MSUV AC9946.

The mounting slot in the quick-release clamps are about 16” long, so if the mounting holes in your miter saw are 16” or less (from front to back), and in a straight line from front to back, you’re golden. That’s not how I roll, though – naturally, the holes in my Bosch 5312 are offset. No biggie, that just adds a step. I cut a piece of ¾” plywood 16 X 26” to make a little platform, and bolted the quick-release clamps to the platform.

To make sure I got the platform square to the clamps, I clamped them onto the rails, marked the location of the mounting slots on the clamps onto the plywood, then removed the plywood and drilled the holes. I set the plywood back on the clamps and installed the bolts to secure it with the clamps still secured to the rails, to make sure everything stayed square. To double check, I released the clamps, and was able to smoothly slide the platform from one end of the top rails to the other. After that, I just bolted the saw to the plywood, and all was well. This technique should allow you to attach pretty much ANY saw to the Ridgid MSUV AC9946.

Once the assembly was complete, it was time to try out the collapsing and setup procedure. Standing at the end with the handle, look down and you’ll see a little foot pedal with a lock icon. Give it a tap with your foot, and away you go. Since I started with it in the setup position, I just held onto the handle, and the other end dipped down until the unit was in the upright and locked position – just like an airline seatback tray table, but much heavier, and with a 12″ blade on it. I was worried it might be a bit top heavy and prone to falling over, but it was very stable.

To set it back up, the same process applies. Unlike some miter saw stands, where you have to pull up on each end separately, everything happens from the handle end. Tap the foot pedal, pull back on the handle, and the Ridgid MSUV AC9946 rolls back toward you slightly. As it does so, the front end rises up, and the unit locks into place. Again, it takes about three seconds, and it’s easy peasy – my kinda setup!

I rolled it out the back door, across the porch, and down the concrete steps. The Ridgid MSUV AC9946 rolls smoothly, and was pretty easy to control going over the door stoop and down the steps, despite the fact that the combined weight of the MSUV and the Beast is roughly 130 lbs. A note on maneuverability: The width from outside the left wheel to outside the right wheel is 26”, so the unit will fit through most doorways with no problem. With a saw attached, however, all bets are off; the 5312, front to back, is around 40”. I can gain a little space by setting it for a 50 ° angle, but for most doorways, it’s easier to just pop it off, schlep it outside, and reattach it.

Once the quick-release clamps are attached to your saw, with or without a platform attached, it takes literally two seconds to attach or remove it. Hook the front of the clamps over the front rail, drop the back end over the rear rail, and press the clamp lever in. That’s it, and once it’s locked, it hunkers down and will not move. It comes off just as easily: Flip the clamps open, lift the back end up, and pull it off. The saw can be rotated to be used from either side of the stand, and slid from one end of the rails to the other, or any point in between.

Along with making it easier to transport your saw of choice, miter saw stands need to provide a stable work platform. The Ridgid MSUV AC9946 offers a very solid work area, with some handy features to help get your work done, so you can load that sucker back up and go home on time.

The Ridgid MSUV AC9946 has built-in locking extensions that slide out on the sides, giving you a total supported work length of 9-½ feet. At the end of each extension is a work support that adjusts up and down, locking into position with a quick twist of a knob.

Attached to each support is a work stop (not to be confused with a work stoppage, which is another can of worms), which can be quickly locked into position for repeated cuts.

Tired Of Schlepping YOUR Saw?

Like I said, even for someone in peak physical condition, like me (a minor exaggeration, possibly), lugging a heavy, awkward saw around gets old. Having a set of wheels should be a great help in reducing the chiropractic visits. Having a sturdy, dedicated work surface, rather than a piece of plywood balanced on a couple of sawhorses, makes for a safer and more productive work station, too.

I’m very impressed with the Ridgid MSUV AC9946. It’s very well thought out, providing pretty much everything you’d expect from a miter saw stand/cart. It’s extremely sturdy, and the extensions, work supports, etc. are quick and easy to use and adjust. The key feature, though, is how easily it sets up and collapses. Being able to do so with so little effort, in just a few seconds, is a huge time – and back – saver.

The Ridgid MSUV AC9946 is due to be released in May of 2016, with an estimated retail price of $199. It will be sold at Home Depot, among other places, where it will replace the current model, the AC9945. (Insider tip: They’ll likely be trying to clear them out, so you might have a chance to pick one up at a sweet discount. It’s a very good stand, too; I may pick one up for my DeWalt planer, which is even heavier than the Beast!). The Ridgid MSUV AC9946 will be backed by a three-year warranty, and is covered by Ridgid’s Lifetime Service agreement if you register. 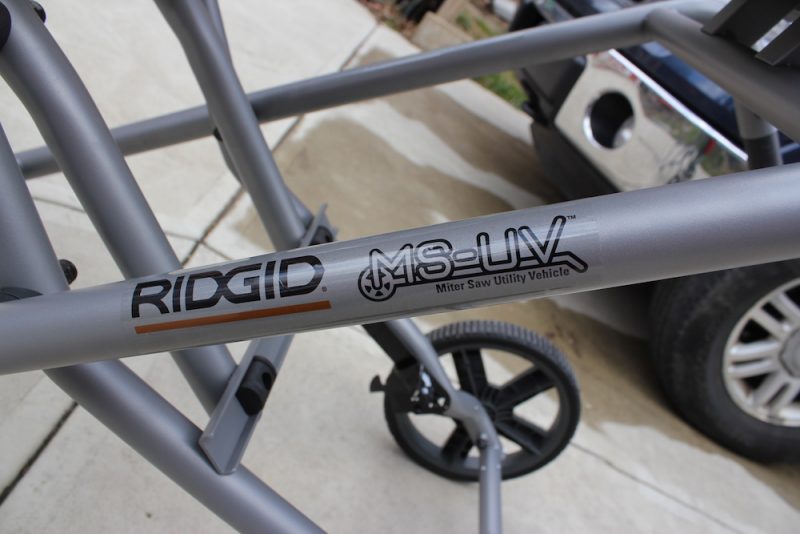