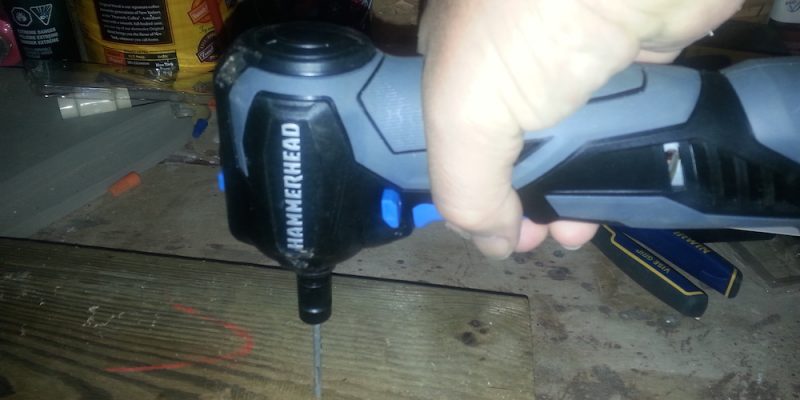 It’s a tough world out there in the tool Biz! As the legendary 90’s boy band “New Kids on the Block” taught us: Everybody’s always talkin’ ’bout who’s on top. Don’t cross our path ’cause you’re gonna get stomped. We ain’t gonna give anybody any slack. And if you try to keep us down we’re gonna come right back! So, is there room in the power tool market for a flashy “New Kid on the Block?” Hammerhead Tools is the latest contender in the race to bring a more hip and tech-savvy look to the hand tool game. Their premiere offerings include the Hammerhead “Switch”, a compact laser measuring tool, and 30 and 50 piece impact bit sets. Hammerhead is clearly shooting for the DIY market, but are they tough enough to hang with Joey, Jonathan, Jordan, Danny and Donnie?

The Hammerhead Switch is an auto-hammer similar to the Craftsman Hammerhead (confusing name conflict here) and the Ryobi or Rigid auto-hammers. The twist is that the Hammerhead Switch also works as a right-angle impact driver. A pretty neat idea, really. Despite the fact that is only a 12 volt tool, I was surprised that it would actually drive a 16d common nail and zip in a 3” Trex screw. It does fit well into tight spaces, which is super-handy when working between studs or joists. I can see this being a nifty Christmas gift for the tool-geek in the house.

Be advised, though, this is more of a homeowner tool than a pro tool. In their slick video ad, Hammerhead shows a shadowy Jason Statham-looking dude (I guess Donnie Wahlberg wasn’t available) using it to nail-mount a switch box between studs. He slo-mos around, flips the switch and screws in some bracing. Yes, these would be a good uses for the tool if you are remodeling your own home, but I don’t see a pro electrician wanting to carry another power tool onto the jobsite for that job. Also, it’s a little noisy and slow when hammering, and the 12v battery is not removable, so once it’s dead, the whole unit has to go on the charger for a half an hour. The integrated battery is a design decision that keeps the price of the unit below the competition, but ultimately hinders the usefulness of the tool. All in all though, the Hammerhead Switch seems to be a well-built tool and fun to use, making it a good contender for occasional home use or the weekend warrior.

Hammerhead also released 6 piece, 30 piece and 45 piece impact bit sets to go along with the Switch. The 45 piece set includes a slightly bigger assortment and a nice hard carrying case, but the bits and accessories are essentially the same. Hammerhead claims that their bits last twice as long as standard impact bits. I can neither confirm nor deny that claim at this point, and specs are pretty limited on the website.

Hammerhead’s other new offering is their compact laser measuring tool. It seems like an odd companion to the Switch, but it does share the high tech tool geek vibe and design style. The Hammerhead laser measuring tool isn’t breaking any radical new ground, but for the price it is a really nice unit. The display is clear and bright, the interface is simple and intuitive and the size is perfect to fit in a button-flap shirt pocket or the side pocket of your carpenter jeans. It is accurate to 1/16” up to 100 feet, which is plenty good for spec’ing out materials or most site measurements. It does straight line and square foot measurements.

Another handy feature is the USB charger. I love that you don’t have to worry about batteries, and the unit can be charged from a wall outlet or usb power supply in the truck. Good stuff! I give the Hammerhead laser measuring tool a big thumbs up! This is one of the few digital gizmos that I can see earning a place in my tool box, hangin’ tough with the stud-finder.