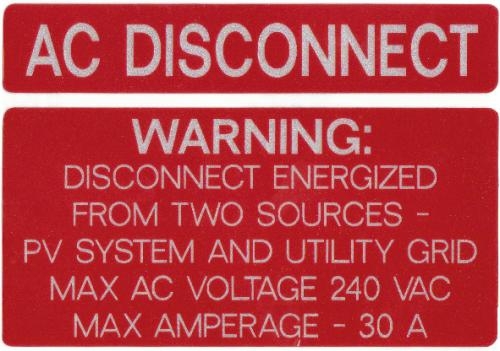 I’m may not be the sharpest chisel in the toolbox, but I’m no dummy. And neither are you! If I can understand solar technology, you can too! So rather than an “idiot’s guide” or “…for dummies,” I think we need some info for those of us whose IQ is just slightly south of MENSA membership! Welcome to my Solar for the Subgenius class!

In previous articles, I have covered solar attic fans, finding a good solar site, battery backup, financing your solar project and the advantages of ground-mounted solar arrays. In this episode of “Solar for the Subgenius” I will attempt to demystify the arcane world of DC to AC inverters.

What the heck is an inverter, and why do I need one?

Photovoltaic (PV) solar panels produce DC electricity. DC is great, if you are using DC loads. Basically, anything that runs on batteries is DC, so if you are putting together a PV system in an off-grid environment, you may not need an inverter at all. You can just store your energy in batteries, and use DC lights, appliances, etc. But, if you want to run any of your standard 120 volt AC appliances, invert, you must!

Inverters convert direct current (DC) to alternating current (AC). You may currently (excuse the pun) own a small inverter that plugs into your car’s cigarette lighter (oops, sorry…in the 21st century we refer to those as “DC outlets”). The really small inexpensive inverters, generally under 500 watts, are okay for powering small appliances like portable TVs. A bigger one might even run some kinds of power tools. Unfortunately, these small portable inverters do not provide “clean” power and can be harmful to your gear over time. Back in the last century, I used to keep one in my truck to plug in my cordless battery chargers, and after about a year, both batteries and chargers were done for. This is because the el-cheapo inverters produce what is called a “modified sine wave” rather than a “pure sine wave.” I won’t get into the physics of this, but a modified sine wave is choppy, and a pure sine wave is smooth. Think Mario 8 bit vs. Mario 128 bit. More expensive modified sine wave inverters produce a less choppy wave, and therefore are less likely to damage your stuff. The real price jump happens when you go up to a pure sine wave inverter that is UL certified to be used in your home, rather than just occasional use in your truck.

Up until the last few years, When you talked about an inverter for solar panels, a “string” inverter was your only choice. String inverters are designed to take power from a number of solar panels, wired together in series and/or parallel. This central inverter was a big, heavy bugger that was mounted between the array and the AC breaker panel. As inverter technology changed, the market moved to a transformerless design that allowed for much smaller, lighter designs.

Eventually, the microinverter was born. Microinverters are small, and designed to work with one individual solar panel. Microinverters allow all of the DC wiring to be done on the array itself, with the inverters getting mounted right along with the panels. Now, some manufacturers are factory installing microinverters right on their panels, eliminating any on-site DC wiring. These are referred to as AC panels, although in reality, the panels themselves are still DC panels with an integrated inverter.

There are currently no off-grid microinverters on the market. So, if you are using solar for a stand-alone system at a location where there is no grid power, you are going to be looking at off-grid string inverters. These are available with input voltages of 12,24 and 48 volts, to match your battery configuration. The big names in off-grid inverters are companies like Magnum and Outback.

If you are installing a battery-less grid-tied solar array, you will be looking at grid-tie inverters. These inverters interact with the power grid and use it as backup and storage. When the sun is shining, you will use your solar power in the house. If that is not enough to power all of your loads, you will receive additional power from the utility grid. If you make more energy than you are using, the excess goes back to the grid. If you want backup power, you will not have it with a battery-less grid-tied system. If that is a priority, you may want to read my earlier article on solar-tied battery backup.

String Inverter vs Micro Inverter – How to decide?

So, which type of inverter is best for you? You can find endless discussions about the “String vs. micro” debate online. There are strong feelings on both sides of the debate, but I will share with you some of my personal experiences with both types of inverters in grid-tied applications.

Cost: When looking at cost, microinverters cost more. They cost more per watt, and in a lot of cases, I think they add to labor as well, although a lot of people would disagree with me. Microinverters do have less complicated wiring, eliminating the need for a DC disconnect, and simplifying the wiring a good bit.

Durability: It is commonly believed that micros fail more ofter than string inverters. This is due to the fact that they are exposed to high heat and adverse weather conditions, being mounted under the panels. This is why you will generally find stronger warranties with micros- they know that their product may be less reliable. I know a lot of guys who report multiple micro failures, and are predicting an upcoming microinverter apocalyse on the horizon, but like Y2K and 2012, not so much. I’ve done service calls on plenty of string inverters.

Personally, I prefer installing microinverters. They are less work for the electrician, and they make life easier for the utility company and electrical inspectors. And as we all know, if the inspector is happy, we are all happy!