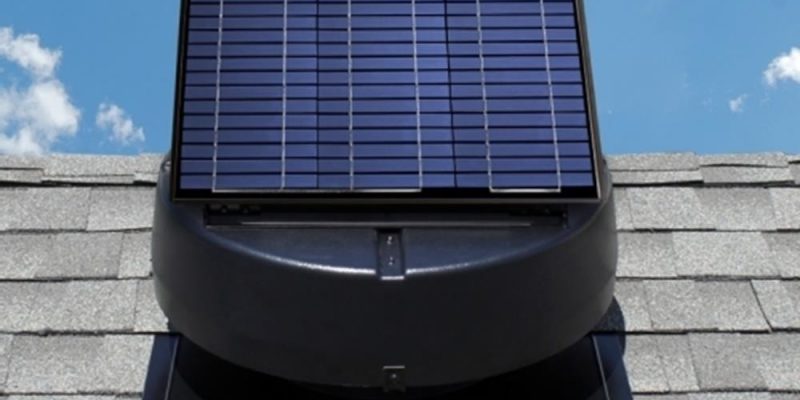 As an experienced solar installer and a notorious cheapskate, I am often asked, “How can we start using renewable energy in our home without spending a ton of money?” Okay, not those exact words, but something to that effect. These are people who are looking for ways to reduce their grid-powered energy habit for any number of reasons. They may be concerned with the environment, trying to increase their personal energy independence, or just trying to save a buck. All very good reasons, in my opinion.

The problem for most folks is that they simply don’t have the available financial resources to cover the up-front investment that installing a large solar array requires. Of course, there are a lot of energy efficiency upgrades that cost little or nothing and pay back in just a year or two in energy savings, but let’s face it… they just aren’t as COOL as making your own power! How can a person dip their toe in the solar pool without drowning in debt?

The Case for Solar Attic Fans

One great way is the solar attic fan. I was a bit skeptical of these babies when they first started showing up at the renewable energy fairs, but in the past few years I have installed a couple, and I gotta say, I’m impressed!

Attic fans have several benefits. First, by increasing the airflow in the unconditioned space up there, you can lower the attic temperature as much as 50 degrees. That translates to a 10 degree drop down below in the living space. That could mean major air conditioner savings. Second, by keeping the attic cooler, your shingles will last longer. Solar attic fans have the extra benefit of not stealing back any of those electricity savings to power the fan.

There are several styles on the market. Some are designed like a conventional roof box vent with an integrated fan and solar panel. Some units even come with a built in thermostat and humidistat. Roof-mounted units come with flashing that needs to be installed under the shingles, so they are best installed when you get a new roof. Also, because the solar panel is fixed to the vent, it really needs to be installed on an unshaded south facing roof. This may not work for some folks.

The other option is a gable fan with a separate solar panel. Personally, I like these because they are really versatile, you don’t have to worry about roof leaks, and if anything ever goes wrong, they are in an easy place to replace or repair. The solar panel is separate and comes with a long enough wire to reach a convenient sunny south facing spot on the roof. The one shortcoming of most of these models is that they come with minimal mounting clips that aren’t terribly versatile as far as mounting options go. Also, you need to screw them to the roof through the shingles, so you want to make sure to seal them well with silicone.

I have some friends who asked me to install a solar attic fan, but we found that there was not really a good spot on the roof for the solar panel, due to the orientation of the house and a big oak tree shading most of the southern part of the roof during the middle of the day. My solution was to fabricate a nice little wall mount for the panel using an old satellite dish mast. You can find these new for about $25 at your local radio shack. A little bit of aluminum L- channel and some U-bolts and you have a nice adjustable mount that looks very tidy.

The fan itself installed nicely behind the dummy vent that the siders had installed just for looks. I used my Fein multi-tool to cut an access hole in the sheathing behind the vent, installed some 2X4 blocking, and mounted the fan in place. My only complaint was that the sheetmetal housing is a little lightweight on the model we used, and it distorted slightly after running a while, causing the fan blade to hit the side slightly. I had to go back up and add some additional brackets and blocking to assure that it will stay in shape and running quietly.

All in all, the solar attic fans that I have installed are performing well, and providing noticeable energy savings to their users. This year, I’m even going to put one on my own house! If you’re looking for energy savings you can see right away and feel in your pocketbook, take a good look at installing solar attic fans at your house!