In today’s world of machine-made and mass-produced goods, it’s easy to think that just about nothing is made by hand anymore. Machines spit out parts, robots grab and assemble them, and many human beings are more like IT managers and less like true craftspeople. Heck, even adult beverages are cranked out thousands of gallons a day by a sea of automated stainless steel contraptions. In this golden age of outsourcing and efficiency, a few weathered die-hards and a stubborn new breed make things the old-fashioned way: by hand. And, in a fascinating blend of modern technology, DIY gumption and blossoming skills, an army of garage tinkerers and shop-based “makers” show promise as the next generation of craftspeople we’ll admire the work of. A couple weeks ago a friend and HomeFixated reader turned us onto several videos that highlight some amazing work still being done by hand. Read on for some amazing video of a guitar maker, a knife maker, a window maker, and yes, even a distiller.

The Luthier
As the Lazarides website states, “Instrument making is an art, a craft and a science, especially when it comes to building a guitar.” Guitars, when hand made, are not only instruments to produce music, they are also visual works of art that showcase fantastic woodworking skills. Take the case of Vassilis Lazarides, a man who has spent more than two decades honing his skills as a luthier (if you’re not hip to the instrument-building scene, that’s someone that makes or repairs stringed instruments). Not only does Vassilis’ skilled eye select the ideal pieces of fine wood, but a trained ear scrutinizes the sound produced by a quick rap of the knuckle. Just about 300 hours later (yup, that’s like 30 ten hour days!), a beautiful instrument emerges that is an almost living and breathing testament to the skill, passion and hand-made attention to detail that goes into each guitar.

At first [Vassilis] constructed traditional instruments such as bouzoukis, oud, pontic and Istanbul liras and renaissance lutes. Since 1995 he has been making classical and flamenco guitars. He has been a member of the “friends of artistic musical instruments’ construction” club, which was a group of people whose the love for musical instrument building brought the together for sometime. . . Having met Giorgos Papathanasiou a great flamenco guitar collector, he saw the art of many great luthiers. By taking up the maintenance and functional repair of many instruments of this immense collection he had the opportunity to watch from within, how some of the most important instrument builders work. Thus, Vassilis Lazarides’ guitars have travelled to many European countries and now they are part of important collectors and flamenco guitar soloist musical assets.

Check out the artful work of Vasillas Lazarides in this inspiring video:

This beautiful film was made by Deepgreensea. More details on Vassilis Lazarides and his guitars at Lazarides Guitars.


Joel Bukiewicz graduated with a degree in literature and a plan to write for living. With rare exceptions like Stephen King and J.K. Rowling, I can personally vouch for the insanity of that aspiration. Like many writers, he found that the writer’s path wasn’t wasn’t paved with golden bricks, surrounded by delightful prancing unicorns, all with a steady paycheck. A hiatus from writing resulted in a torrent of creative energy which had to be expressed somewhere, eventually in the form of some amazing hand-crafted knives for the culinary-obsessed. Joel even hosts workshops of basic (kitchen) knife-wielding skills. If you’re going to shell out a few hundred bucks or more on a hand made knife, you better know how to put it to proper use. Joel’s story is intimate and inspiring, with a sprinkling of well-placed profanity. Check it out for yourself here:

Read more on Joel at Cut Brooklyn. This is the 2nd in a series of Made By Hand films by Bureau of Common Goods, who also produced the next film, The Distiller.

The Distiller
Brad Estabrooke, like many successful entrepreneurs, was driven to pursue his own passions through the hatred of a previous job. That, and apparently an appreciation of fine alcohol. The hatred of jobs and love of alcohol often go together, but not usually in the way that manifests in entrepreneurial success. Check out some of Brad’s journey here:

Breuckelen Distilling began crafting gin and whiskey from New York grains during the summer of 2010. Located in the Sunset Park neighborhood of Brooklyn, the distillery sells its products throughout New York City and they are available for sale in Illinois, California, Washington, D.C., Maryland, Delaware, and Florida.

If you’re outside those states, it looks like you’re SOL for now. More details at Breukelen Distilling online. 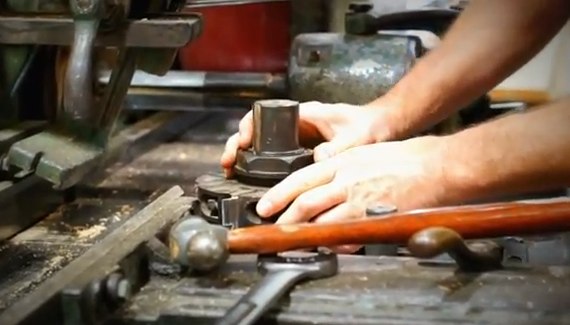 I first met Shawn Woolery of the San Diego Sash Company shortly after we bought our home. I was contemplating what to do about some vintage double-hung windows in our home that were in terrible shape. By “terrible”, I mean they had been devoured by termites, neglected for decades and failed to function properly, even when I cut through several dozen layers of lead-laden paint that were lathered over parts originally designed to move. I also wanted to replace a couple 1960’s aluminum retrofits that we’re seriously harshing my historical mellow. I ultimately decided to replace both the damaged and historically innacurate with something almost identical to the originals built back in the 1930’s. Shawn was exhibiting at a local historic home show, and I grabbed a business card from him. Years later, we hired Shawn to make a dozen windows for us (and counting). I’ve been by his shop, and although he uses machines (many of which are decades old), every sash is lovingly crafted by hand. You won’t find any robots here:

More details about Shawn and his great windows at San Diego Sash Company.

From spirits to window sashes, these are just a quick glimpse into a growing movement of creators not afraid to roll up their sleeves and get their hands dirty. Many use vintage tools and know-how passed down over generations, often by elders that dedicated their entire careers to a single craft. Others harness the research and networking power of the Internet to figure out how to do things on their own. This movement flies in the face of outsourcing, stating not only can we still make it here in the USA, but we can make it ourselves, by hand, and in a way that adds value. It’s product with soul, something we could use a lot more of. If you know a maker who still believes in making things by hand and you’d like to provide some recognition, please share their info in the comments below.