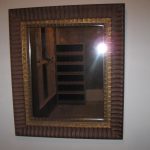 This may seem like a dumbass tip, but because so many people have asked me how to handle this situation, I’m going to throw it out there. On multiple occasions, I’ve been approached for guidance on how to securely hang something heavy, such as a mirror, in an area where a stud isn’t located. I can tell you the correct answer is NOT to just wing it, bang a nail in, hang it anyway and cross your fingers.

When hanging anything that has weight, especially something oversize and heavy, like a mirror, the hook and nail MUST go into a stud. At times, an item is so heavy it requires more than one hook and nail. But what if the stud isn’t in the right spot?

2)      Span a piece of low profile wood, (like ½”, so it’s meaty enough to nail or screw through, but won’t push the mirror away from the wall too much), from the stud to where you want to place the picture hanger, and screw in wallboard anchors to secure the end that isn’t sitting over a stud for super strength. Of course if you can hit two studs instead of using anchors on one side, all the better. 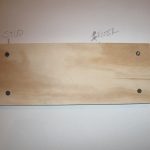 You can use plywood or whatever; it doesn’t have to look great, because it’s hidden behind the frame. Yeah you can try mollies, which are a pain in the ass and often splinter, at least when I use them. They also can’t be removed from the wall, unless you dig them out. And, if you ever need to move the mirror, that means a huge hassle to patch and repaint. Wallboard anchors on the other hand, can easily be unscrewed and removed if needed, and leave a hole that requires minimal patching and touch up. You can even reuse them for another application if you want, unlike mollies. 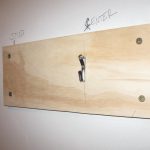 Just make sure the length of the plywood is a bit less than the length of the frame so it’s not sticking out beyond the edges. Now that you’ve got a secure backing to work with, nail your picture hooks and nails wherever they need to be across any spot on the board. The board gives you the solid backing needed, in the exact area you want to hang the mirror. Now, the mirror is centered over the vanity and an added benefit is, you don’t have to worry about a beheading when you lean into the sink to spit.