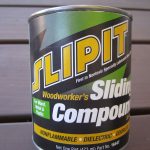 When was the last time someone suggested you “lube your wood”? I am, of course, referring to lubricating wooden drawers in cabinets, double-hung windows, etc. Whatever you were thinking, I’m going to (mostly) resist the urge to make lubricant jokes, mainly because they’re so easy. Living in an older house, we’re confronted with dozens of wooden parts that are theoretically supposed to move freely. Double hung windows, doors, built-in drawers, etc. Luckily for us (and you), we stumbled upon a very handy lubricant available from our sponsor Rockler. It’s called SlipIt Woodworker’s Sliding Compound. We’ve been testing it the last few months and want to let you know what we think.

Our house is filled with double-hung windows which I have a love-hate relationship with. It was mostly hate one night when, (while applying huge amounts of force to get it open), the sash suddenly broke loose and smashed my thumb. Let me just say if I can help just one of you avoid a subungual hematoma by using SlipIt, then I consider this lubricant review a huge success. Anyway, a buddy from San Diego Sash Company used SlipIt on some restoration windows and I was intrigued. “Where do I find this mythical lube?” I asked. Rockler of course.

You know how when you use a lubricant it somehow finds its way onto just about everything (except for the surface you’re trying to lube)? I’m happy to report that SlipIt is probably the least messy lubricant I’ve used. I’d describe its consistency as something between a gel and a very viscous liquid. To use it, you simply stir it and then apply with either a brush, cloth or by hand. I used a simple chip brush to brush it on the contact points of our double hung windows. The result was buttery smooth operation. I also found it great for some wooden drawers that I think were designed by a sadistic woodworker to stay closed from friction.

I was skeptical as to how long the lube would last, which is why I held off on writing this review. After 3-6 months, I found there was still an effective amount of lubricant left on the wood surfaces I applied it to. The surfaces I used it on were sealed, so your mileage may vary if you try it on more porous surfaces. Despite all the talk about wood, Slip-It is actually designed for wood, metal and even plastic. Since Otis Elevators has been one of SlipIt’s customers for several decades, I’m guessing it holds up pretty well on metal.

Slip-It is nonflammable, odorless, dielectric (which I think either means you’re less likely to electrocute yourself using it, or it’s good around electronics, but don’t quote me on that). Not only that, but it’s non-toxic. It’s cleared by the FDA and USDA for incidental food contact. I still wouldn’t recommend lubing your cutting board with it, but it’s reassuring to know you’re not likely to dissolve away if you accidentally drip some on yourself. SlipIt recommends using it on windows, drawer slides, gates, hinges, fences, slides, tracks and even zippers. A friendly word of advice: Don’t let anyone see you applying it to your zipper (at least not while your pants are still on), that could be very, very awkward.

SlipIt comes in two versions, a standard formulation that includes silicone and a “Sil-Free” version which is the formulation we tested. Over a dozen people have reviewed Slip-It over at Rockler, and all but one gushed like it was the best thing since the table saw was invented. So, the next time you need to lubricate your wood, you know where to go. No, not there! To our sponsor Rockler, where they sell Slip-It Sliding Compound for about $15/pint.