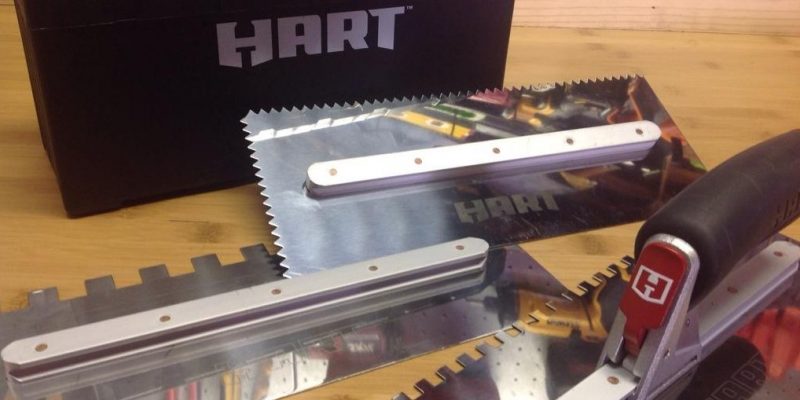 Want to know who the tile guy (or gal) is? You can hear him coming a mile away thanks to the dozen trowels and floats rattling around his bucket like a pre-school band’s percussion section. It’s no secret I like to keep things tidy and well organized. When it comes to tidy and organized for trowels and floats, the historic solution has been the bucket. Unfortunately, the bucket solution is neither tidy, nor organized. While you’ll still need a bucket for tile work, we recommend kicking it down to H2O-only duty for the very marginal job it did storing and transporting your tiling tools. Hart recently unveiled the new Quick-Tatch Trowel and Float System, (along with a couple other nifty Clamp innovations we’ll give you a peak at in the video). Whether you’re a tiling pro or a DIY’er, we think you’re going to love them!

If a picture is worth a thousand words, well, then a video must be worth at least a thousand pictures. Check out HomeFixated guest host Jason Swanson, complete with his fancy black Hart polo, as he walks you though a few of the latest innovations from Hart including a couple cool new clamps and the slick Quick-Tatch.

The Bucket (or Box, or Shelf) Problem

Sure, anyone doing tile work is going to need a bucket. Does that mean the bucket is an ideal system for storage and transport. If it did, then concrete crews should start storing their tools in the spinning drum of a concrete truck too. The issue with trowels and floats is that they’re bulky and awkward to store. And, suppose you want to carry your tools and a bucket full of thinset into the job? Well, then you’re doing the awkward balancing act of cramming tools into one hand and the bucket in the other. Even if you want to store your trowels and floats in a box or on a shelf, the issue is the handles. The trowels and floats are thin and compact, but with a handle attached to every one, suddenly you’re swimming in a mish-mash of floats, trowels and handles.

That’s right, Hart tackled this obnoxious multiple handle issue by creating one handle that easily glides on and securely attaches to numerous floats and trowels in the Quick-Tatch system. As an added bonus, you can even adjust where the handle attaches to your trowel or float, which is great for getting to awkward / hard to reach areas. One handle is all you need, which means your floats and trowels are suddenly able to stow themselves in a nice, compact, easily transportable box.

This is where the magic happens. No longer sprawling around your workspace, the Quick-Tatch Storage Box lets you store up to nine trowel blades – eight in storage case plus one on top, or five trowel blades and one float, or up to three floats plus one blade on top. Got it? The blade you use on top locks into place, and the Quick-Tatch handle conveniently serves as your carrying handle. And, since tile gear like this is known to get grubby and wet, a bazillion holes have been drilled into the bottom (we counted), leaving your trowels and floats dry and rust free. Beautiful, isn’t it?

The Quick-Tatch Floats and Trowels

Three grout floats include gum-rubber, oversize gum-rubber, and epoxy make up the current float line. The floats and trowels have an aluminum riveted spine down the center to which your detachable Quick-Tatch handle locks on and off. The trowels come in five popular notch variations include both square and v-notch versions, along with a smooth finishing blade. They’re all made from rust resistant stainless steel.

Put all these ingredients together and you have an awesome, highly-compact, easy to transport tiling tool system ready to go at a moment’s notice (assuming you cleaned everything off the last time you used it). From a neat-freak’s perspective, one of the things that brings me the most joy about the Quick-Tatch system is how cleanly and compactly everything stowes. When it’s all said and done you have an attractive little box with a handle, that just happens to be a full arsenal for most tilers.

Pricing Where to Buy

Often times with innovation, comes high pricing. That’s definitely not the case with the Hart Quick-Tatch system. Individual components range from $5 for the handle to $12 for the box, with most of the floats and trowels around $8. Combo kits are available in two sizes currently, at either $20 or $40/kit. The Quick-Tatch system is a definite bargain for anyone that wants to tame the bulk and chaos of their tiling gear.