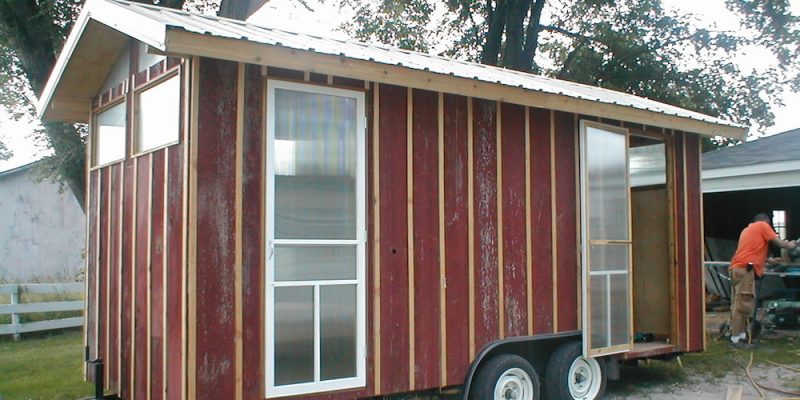 A couple of years ago, an architect friend approached me with an oddball project. Since I am generally known as the king of oddball projects, she knew that I would be hooked as soon as I heard the idea. She asked me to build a “tiny house” trailer, using as much recycled material as possible. “Count me in!” I replied…

As some of you may know, the “tiny house” movement has gotten pretty popular in the last 10 years. In response to tough economic times, environmental concerns and a desire by many to live a simpler lifestyle, houses under 1000 square feet (and even as little as 80 square feet!) are gaining popularity. Recently, the A&E network even premiered a tiny house TV show.

One of the prime movers in the tiny house trailer movement, Jay Shafer, is an acquaintance of mine. Before starting my build, I dropped in on Jay at his tiny trailer while I was on a business trip to California. At the time, his trailer was parked in a vineyard outside of Sebastopol. Jay’s little trailer features a galley kitchen, a toilet/shower, living space and sleeping loft. I got some great advice from Jay, and came back to Iowa ready to roll (pardon the pun.)

Our trailer project was much simpler than Jay’s – just two rooms with bunk beds and room for two small desks to accommodate four interns at a local summer permaculture school. Temporary, portable sleeping quarters, essentially. No plumbing, and just a couple of solar panels to charge laptops, cell phones and a couple small lights. Bare bones, and built on the cheap. We would need to do some scrounging.

Since it was early spring and rainy, and I was building the bunkhouse from the inside out, I was fortunate to have access to a neighbors large steel building to do the initial work. I started with a slightly used 16 foot car hauling trailer. I welded some 4 inch steel tubing to the frame and reinforced it to hold up the ridge beam. The walls were constructed as stress-skin panels with stain-grade plywood on the inside and recycled 2X4s on the flat. The entire thing was sprayed with closed cell foam to make what are essentially SIPS (Structural Insulated Panels). The outside was wrapped in Tyvek, then sided with recycled barn wood, and roofed with some salvaged steel roofing. The outside was trimmed with cedar, and the tilt-out windows were made from unbreakable polycarbonate greenhouse material, and placed to run parallel to the bunk beds. The interior walls were finished with an all-natural beeswax finish, and the floors were insulated with foam and covered with salvaged pine flooring.

The trailer towed easily behind my aging behemoth Suburban, although I would be reluctant to pull it on the interstate. Driving county roads, it easily made the 65 mile trip to its new home with no problems. For short trips between long stays, the trailer has performed well. Make no mistake, though, it’s no Airstream! It is serving its intended purpose well- temporary 3-seasons shelter that can be moved, and it does not raise property taxes for the owner of the farm.

For my next tiny house project, I hope to build a “Vardo,” or Gypsy wagon, that is highway legal. There are some nice ones out there, but They rarely have the look and craftsmanship of a traditional Vardo AND all the stuff that makes the DOT happy. Wish me luck!!