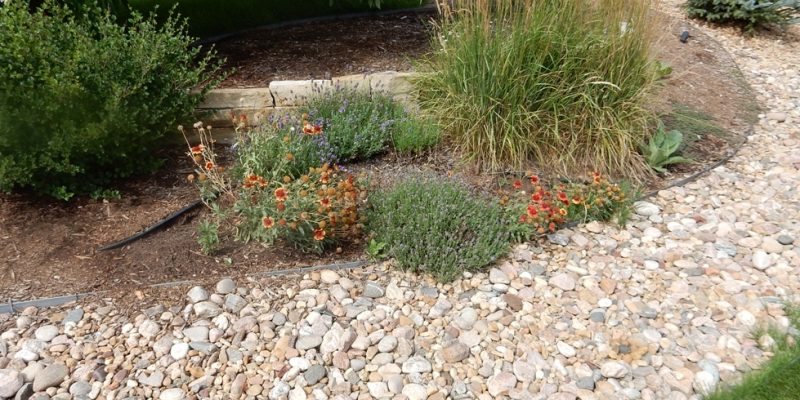 Xeriscape is a popular gardening trend for those of us who live in Death Valley or the near equivalent. It’s a simple concept that calls on gardeners and landscapers to make water conservation a priority. And while water conservation is an excellent goal, a few have taken xeriscaping to a whole new level. I call it “xeroscape”.

Breaking the Laws of Landscaping

My previous neighbors (who I really love- mind you) were xeroscapers. Their entire yard was covered with rocks. Not the pretty landscaping rocks that some use in decorative landscaping ways. It was just plain old rock.

Now to me, when everything is rock like that, gardening nor landscaping are a consideration anymore. Water conservation becomes a non issue too, which is nice… but… since no vegetation lives or breathes in several inches of rock, and there is really nothing to care for, it is no longer xeriscaping. Hence the name xeroscaping.

For the record, my neighbor did occasionally share that they regretted all that rock. No one could enjoy being out in the yard, which was disappointing. But who wants to move several tons of rock OUT that you paid good money to have moved IN? (Not me! I’m a good neighbor and all, but come on!)

A Little Lawn to the Rescue

So, when they sold the place, the first thing the new guy set out to UN-do was the xeroscape. He chose to lay down some lawn and xeriscape, instead. It was a ton of work (literally), but the end result is so much cooler (also literally).

Keep It On Level

The trick to success when laying lawn is in the soil. Since the soil in these parts is of poor quality, my neighbor spent some time tilling up a thin layer of the yucky dirt. Then he brought in a heaping mound of the good stuff infused with organic matter. That sounds fancy. Let’s just cut to the chase and say it. Use good quality dirt mixed with well rotted manure. Lay the rich soil over the poor quality soil. Rake the soil to level it out.

The irrigation system you choose is important for effective xeriscaping. A well maintained sprinkler system with proper heads pointed in the right direction assists in keeping gardens and lawns thriving. That keeps your outdoor living space looking nice and inviting.

With that considered, my neighbor carefully laid out his irrigation lines. The previous neighbor had a couple of trees that required drip lines, so the new guy didn’t have to start the irrigation system from scratch. He just added on to the system box that was already in place. He dug trenches about 10 inches deep to lay his lines in. He determined how many sprinkler heads he would need to water the entire area, and then he installed the heads.

The easy part was waiting for the sod to arrive. When it did, my neighbor quickly took action so the sod rolls didn’t dry out. He unrolled a section of sod down the middle of his grass area. He used two stakes and a line to make sure it was straight. After the first line was laid straight, he placed the adjacent rolls in a staggered method so the seams were not aligned. You want the sod to look as seamless and natural as possible. When the rolls are staggered, there are fewer lines across the lawn.

After the sod was rolled out, water conservation has to be placed aside for a couple of weeks. Until the grass takes root, it has to be kept wet all the time. We hoped for rain, and we actually got some! The sprinkler system worked hard to keep the sod wet, too. Within several weeks, the sod had put down good roots. My neighbor was able to transition to a less rigorous watering schedule.

Aside from using rock and having a limited area of lawn in a yard, there are other ways to go about xeriscaping. You can choose appropriate plants for your region. Obviously, a tropical plant that is very thirsty and loves humidity would not be a great plant for Death Valley and the likes. Some native plants or other drought tolerant species that are accustomed to the conditions in your region are the way to go. Succulents are a great xeriscaping option too.

The Story of Two Neighbors

The main feature in my neighbor’s xeriscaped yard renovation is a lovely section of sod that looks a thousand times more inviting than a bed of rocks. And because it is a small patch of sod, we water conservationist types can smile and relax – on a soft bed of grass.


Two neighbors. Two different stories. One a xeroscaper. The other, a xeriscaper willing to deviate with some greenery. Don’t go extreme with a xeroscaped yard. Xeriscape where you can, and lay down a little lawn in moderation!