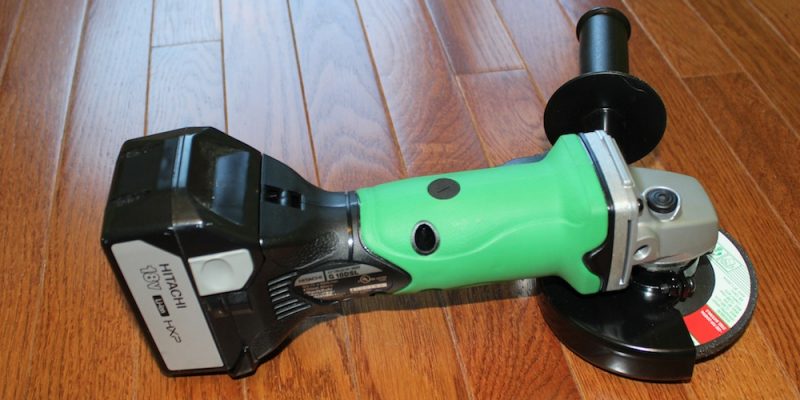 Why do you need a cordless grinder? Unless you’re employed in certain fields; welding, metal fabrication, auto body work, stolen handgun serial number obliteration, or cat grooming, for instance – a grinder may not be a tool you use every day. But no matter what your daily grind is, a grinder is a tool that, when you need it, has no good substitute. (And you cat lovers, chill … I was just kidding. Sort of). Read on for our review of the Hitachi G18DSLP4 Cordless Grinder.

For example, a grinder saved the day on the show “MythBusters” in an episode I saw recently. The team had arrived at their testing grounds, and discovered that a custom-made cannonball was 1/8” too big to fit into the huge cannon that they’d schlepped out there. After some head scratching, someone rooted around in the tool truck and came up with a grinder. Twenty minutes later, the cannonball, while maybe not as pretty as before, was 1/8” smaller, and rolled right into the barrel. Without the grinder, it would have been a wasted trip, and we wouldn’t have witnessed the kick-ass power of a six-pound metal ball blasting through the side of a simulated pirate ship. Aaaaaargh!

According to the folks at Hitachi, their 4-½” Angle Grinder features a powerful motor that provides the speed and torque to produce more work per charge. It can be used to cut rebar or pipe, groove stone or concrete, or grind metal and masonry when a corded tool is not an option. An over-current protection circuit shuts down the Lithium Ion battery power in the event of overload, reducing the risk of causing permanent motor damage. This cordless grinder is lightweight at only 4.0 lbs., and the replaceable brushes are easy to access.

The G18DSLP4 is part of Hitachi’s new series of Lithium Ion battery powered tools. The series is designed to accept a slide-type Lithium Ion battery pack that eliminates the post design traditionally inserted into the tool’s handle. The tools in this series were designed with the professional in mind, and are compatible with Hitachi’s popular compact pro and brushless cordless tool battery systems.

A note on safety: Although we may occasionally interject a bit of humor here, we are firm believers in safe work practices, and learning how to use your tools properly. This is one tool where it’s a really good idea to actually read the instructions, and give more than a quick glance to some of the CAUTION!! and WARNING!! comments in the manual, especially if you don’t use a grinder on a regular basis. Even though this is a cordless tool, this grinder has an abrasive disk, capable of cutting through a steel bar, spinning at speeds up to 9,100 RPM. There are any number of ways things can go wrong, including gouging a painful and unattractive gash in some portion of your anatomy, or being blinded or badly injured by shrapnel from a shattered grinding disk.

This last misfortune normally occurs only when you use a disk not meant for that grinder, or the wrong type of disk for the material you’re working on, for instance trying to cut rebar with a blade meant for grinding out grout from brickwork. A good pair of safety glasses is a must, and gloves are highly recommended. Opt for a full face shield if you’re looking to more fully protect those movie-star good looks of yours. Before you use the grinder, make sure you have the right attachments, everything is properly assembled and tightened, and you know what the hell you’re doing!

I have a corded grinder that I put to work on occasion. While at five amps it’s not a heavy-duty pro model, it’s served me well; I’ve used it to cut through steel plate and rebar, shorten a bolt, smooth a weld, grind down a high spot on a concrete floor, and for countless other tasks. It’s saved me a lot of time on several occasions, and when you’re trying to finish up before beer o’clock, time is precious. So when the folks at Hitachi provided us with their new cordless model to evaluate, I was curious to see how it would compare to my medium-duty corded Makita grinder.

If you’re in a trade where you use a grinder a lot, you’ll probably be sticking with your corded or air-powered grinder for the bulk of your work. A cordless grinder, no matter how well made, isn’t meant to be used all day, every day; they’re typically designed for intermittent or occasional use. Corded or air-powered grinders also generally have more power, and with extended use, you don’t have to worry about swapping batteries, although the Hitachi Lithium Ion batteries have excellent run time.

However, if you’re an occasional user, or if you sometimes have to do some grinding in awkward or unusual places – in a crawl space or up on a roof, for example, or while hanging off a ladder – a cordless grinder such as the Hitachi G18DSLP4 could make your task a LOT simpler. And if you already use one or more Hitachi tools that take the 18V Li-ion slide type battery, you can just throw the bare tool into a tool box or bag, and slap a battery on it when it’s time to make some sparks fly.

The Hitachi G18DSLP4 comes with a 4 ½” abrasive wheel designed for heavy grinding on steel and other materials. It also has a detachable, reversible handle to help give you better control over the grinder. I almost never use the detachable handles that come with most cordless drills and other tools, but I found that using it with the grinder DOES make it a lot easier to grind where you want to grind—and to keep from grinding where you don’t. Kickback can be trouble (ask any politician doing time for taking one).

What’s In The Box

The tool comes almost fully assembled; all you have to do is mount the wheel and screw in the side handle. The tool feels solid and hefty, and appears very well made. The main body, where you hold it, is covered with a comfortable rubber overmold in standard Hitachi green. It seems to be designed with right-handed users in mind; the power switch is on the left side of the grinder, and it’s easy to operate with your right thumb. I tried holding it in my left hand, and the switch can be operated with the index finger, but it’s somewhat awkward, at least for me – and I’m normally very graceful and coordinated. If you’re a lefty, it may be easier to turn it on with your left thumb, then rotate it in your hand to a good operating position. Or you could just stop being so stubborn, and become right-handed.

The power switch turns the grinder on when you push it forward, and it locks in place. Just bump it to turn it off, but be aware it takes about six seconds to spool down. Hitachi incorporated a great safety feature in the G18DSLP4 – if some dummy (not YOU, of course!) inadvertently left the power switch turned on, and you insert the battery, a lockout feature prevents the grinder from operating until you turn the switch off, and then back on. I tried this out, and it works as advertised. This feature will undoubtedly save a few folks from an unscheduled underwear change, not to mention a potentially nasty injury.

Another nice feature is the battery gauge Hitachi built in to the G18DSLP4, as well as most of its newer Li-ion-powered tools, which enables you to depress a button and see immediately the approximate state of charge. If you press it and see only one red light, you might want to throw a fresh battery on before you climb the scaffolding, or crawl on your belly like a reptile into the depths of the crawl space.

The Hitachi G18DSLP4 vs. Rusty Steel

I tried out the grinder on an old piece of 1” square tubular steel. It was from an old truck rack, and has been outside, either mounted on the truck or “stored” out behind the shed, for about ten years, so it’s a mite rusty. It’s actually still pretty solid stuff, as most of the rust is just on the surface, and I figured it would make a good test subject.

I fired up the grinder, and it easily took the surface rust and paint off, and ground down a weld near the end. The Hitachi felt every bit as solid as my corded grinder, and didn’t bog down at all during use in this particular test. From now on, if there’s any chance I’ll need a grinder on a job, I’ll just throw the Hitachi into my tool bag, rather than schlepping along another big plastic tool case with the corded grinder. When I need it, I’ll just slide the battery off of my drill, slide it onto the Hitachi, and let the sparks fly.

Welcome To The Grind

The Hitachi G18DSLP4 is available only as a bare tool. It comes in a cardboard box, and has no battery, charger or accessories other than the side handle, abrasive wheel and the wrench used to attach the wheel.

If YOU’D like more freedom to move around while you’re being abrasive, you can get Hitachi G18DSLP4

You may find a better deal by looking for an 18-volt tool that uses the same battery, which gives you another new tool (and who doesn’t need another new tool!) AND a battery for your grinder. Whichever route you go, be abrasive wisely! 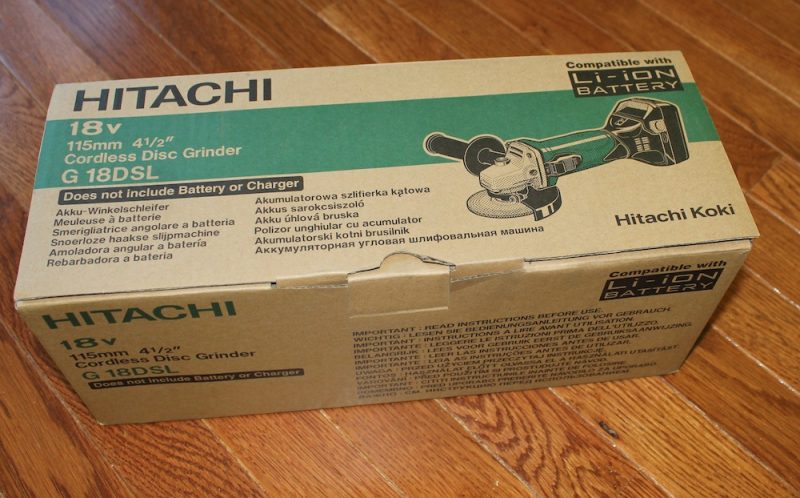