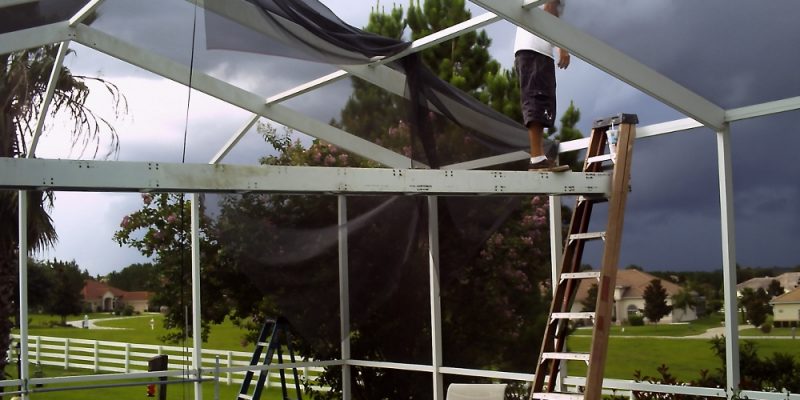 It’s coming up on the end of pool season for many parts of the country, but maybe taking care of that pool screen roof has been on your honey-do list for months. Or, maybe some wildlife decided they’d use your pool screen as a climbing wall and left your screens looking like swiss cheese. If your pool screen could use some help and you have some basic diy skills, along with more advanced ladder safety skills, pool screen repair doesn’t have to sink your summer beer budget. When I get the chance, I jump at repairing pool screens. It’s an easy job for the most part – except for the heights. It takes a good pair of Rocky Mountain oysters (and a firm grasp of safety at height) to brave the ladders and boards. If you’re steady and safe on a ladders and can keep your fear of heights at bay, you can probably fix your pool screen roof panels.

I rate roof panel replacement difficulty using The Transformers rating scale. That’s because just like The Transformers, there’s more than meets the eye! You don’t know how difficult it can be to get just one lonely panel. Typically, without a helicopter or crane, you’re not going to be able to fix just one panel.

For instance, if you have a damaged panel that’s over the pool and at the peak, that’s called a Megatron. That’s because he was the leader of the bad guys and that panel is going to be the leader of the bad guys for you too. You’ll need to remove and replace every panel below it until you reach the edge of the screen since you can’t spline up on the screen cage or train a spider monkey to do the job without a ladder.

That’s the breaks. By the way, if you’re wondering what an Optimus Prime is, it’s when you have a small wall panel that’s easy to get to. And yes, I do make my crew talk like robots while they are doing those panels.

Instead of building pyramids, I build a ladder scaffold – you know, just like the Egyptians did. Because the space you’re working in is surrounded by lots of stuff like, say, a giant hole filled with water, you maximize space wherever you can find it.

I can’t fit conventional scaffolding into such a cramped space, so I have to use 8, 10 or 12 foot step ladders and a walk board to do the job. To span the huge distances, we built a custom built aluminum walk board from some 22 foot long pieces of 2×6 pool beams, 2×2 struts and wrapped it all with a single piece of aluminum kick plate. It’s long enough to span pools, light enough to be (sort of) easily maneuvered inside a pool screen, and, most importantly, it fits inside the ladder rungs – you know, just like the Egyptians did. The setup you see here isn’t OSHA-approved, so if you can create a more secure scaffold setup (particularly on the side we didn’t have room to open the stepladder, that’s advisable. Make sure any parts of the structure you’ll be applying any weight to are up to the task.

Help! I’m stuck on a Ladder

The next part definitely requires a helper unless you really need some extra stress in your daily routine. Nothing like white knuckling up and down the ladder to fetch the spline you dropped in the pool twenty times to help you keep your sanity.

Once you make it up on the ladder, you’re in for quite a treat. You get to precariously balance yourself, your splining tool and screen/spline all at the same time while dangling high above the edge of a thick concrete slab. Don’t look down and remember if you do fall – aim for the pool! Seriously, if you’re not experienced working with ladders and heights, this may be a job you just want to read about and then contract out for. Your beer budget isn’t worth your life or ability to walk.

If you’re still with me, set your tools aside for now and start ripping out the old screen and spline. The old spline on the roof is a fun fight. It’s sort of like reeling in a 20 pound bass while you’re walking on a tight rope. You’ll need to start from the top and work your way down to the edge of the pool cage without tipping the ladders over or otherwise endangering yourself.

This is my favorite part. This is where I find out that the original pool cage installers screened over the top of the ridge beam with one big piece of screen. That means what looks like two or more separate panels is really one big one. And if the old screen is too brittle, you can’t spline the undamaged parts back in place. You end up having to replace the entire run instead of the two or three panels you previously thought that you needed to replace. Happy days!

No Way? Are you Kidding Me? Wheelie?

Get out your big wheeler; it’s time to roll some spline and screen. I always make the guys cut the screen out on a nice smooth driveway. After they sweep it off, they have a big open space to cut screen without it having a chance to get all wrinkled up. They don’t like it because they have to get out from under the shade of my ass and actually do some work in the sun, but I like it just because I think some of my helpers need a good tan and it helps keep the screen cuts nice and pretty.

Rolling a roof panel in is a lot different than rolling in a wall panel. With a wall panel, you roll in the top first, the sides next and then the bottom last so you can get the proper tension on the screen. Then you go back one last time and cut the excess screen away. But when you’re on the roof, you don’t have the luxury of going back over the same panel more than once. You’ve got to work three sides at once and trim the materials as you go along.

The best way to keep a roof panel tight and right is to stretch the screen at a diagonal angle rather than horizontally or vertically. Where the two screen edges run parallel, keep the red-lined side of the screen’s factory edge directly in the center of the aluminum struts for reference. Pull the other side tight as you work your way along.

When you’ve got to move down the walk board, trim the pieces as you go. Once you make it to the end of the panel, you can pull it tight for the finish. But if you don’t have it tight between the perpendicular edges before you make the final seam, it will end up being a little loose. You’ll have to pull out the spline part of the way up the roof and re-spline it tighter or else you’ll have sags.

Work your way to the end, disassemble the walk board and take one of the ladders outside of the pool screen. This allows you to access the final seam and the final panel so you can pull it tight. Be careful you don’t poke any holes in the wall panels unless you’re replacing those too! If you’ve done everything right, you’re new roof panels will look nice and tight, just like a trampoline.