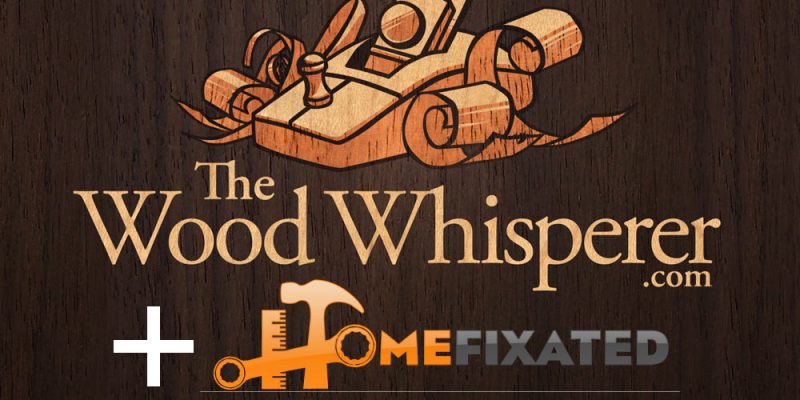 Editor’s Note: Since we managed to dupe a few people with this, and our psychic abilities tell us you are reading this after April 1st, 2014, please note that this post was for April Fool’s Day! Our thanks to Marc at THE Wood Whisperer for putting up with our foolishness! Anyway, here you go. . .

After months of work, we’re really, really excited to break the news: Home Fixated is officially acquiring the wildly popular woodworking site TheWoodWhisperer.com! We’ve been big fans of the site here at Home Fixated, so we couldn’t be more honored to have The Wood Whisperer officially join the Home Fixated family. Although we’ve exchanged many emails over the years, I first met Marc Spagnuolo at a media event for Jet / Powermatic last year. It was there that we first started discussing possible collaboration. I would have never guessed it would have culminated in this exciting day, but here we are! Woodworking is a natural fit for much of the HomeFixated.com demographic, and we’ve been subtly working on adding more woodworking content to the site. By acquiring TheWoodWhisperer.com, we’ve been able to jumpstart that strategy in a BIG way, bypassing countless hours of thankless content creation ourselves. Read on for more details about the deal and some exciting changes we have in store for Wood Whisperer fans!

What TheWoodWhisperer.com Fans Can Expect from the Deal

Acquisitions sometimes have a bad reputation. We’ve all heard the horror stories before. Some big, heartless, soul-sucking corporation swoops in to acquire another company, butchers it, and sells off its assets for a tidy profit. I can assure you, we’re well aware of this danger. And, while The Wood Whisperer’s well appointed workshop might be a tempting target to some takeover pro’s, that’s not what we are about at Home Fixated. We’re also highly cognizant that tampering with an already winning formula is simply inviting failure and disaster. For these reasons, we plan to only implement three subtle changes in the first two years:

We all know and have come to love Marc Spagnuolo from his role in front of the camera, which is why our plans for him might come as a shock. With so much time in front of the camera, it’s easy to start to feel enslaved by it. Marc has been wanting more freedom away from the camera, which is why we’re planning to introduce Marc’s wife Nicole as the new face of Wood Whisperer videos. With a demographic comprised mostly of lecherous 25-65 year old men, we feel this talent transition will surely be well received by Wood Whisperer fans. Marc plans to spend more time editing videos, as well as pursuing two new hobbies: Fuse Beads and Rainbow Loom. Marc will still make on-screen cameos, but keep your eyes open for some great video content from Nicole very soon!

With Home Fixated’s IPO last year, we had the benefit of substantial resources to apply to this deal. While the exact deal terms remain confidential, we can reveal that the deal was valued in the high 10 figures (mostly through stock options in HomeFixated.com’s burgeoning shares). The deal terms have been executed by both parties, and you can expect changes to start rolling out today, April 1st, 2014!

Should you have any questions related to the deal, please feel free to reach out to us in the comments below, or through our contact form. You can also reach Marc through the new Toll Free Wood Whisperer Hotline.