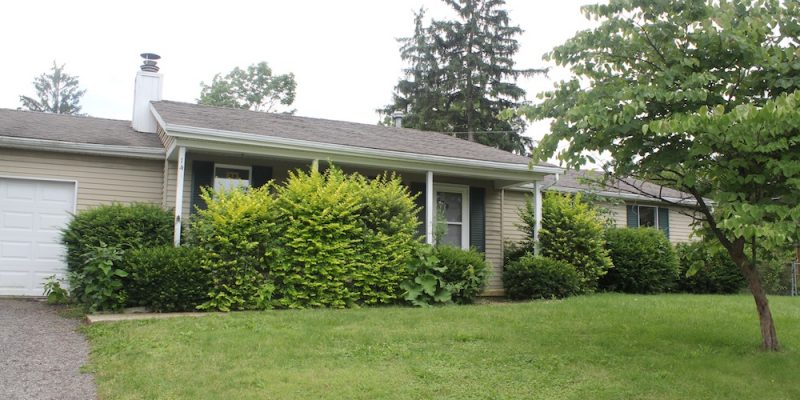 So how much difference can a porch railing make, anyhow? You’ll see at the end, in the incredible “after” pic. The above shot is what my daughter and her husband’s house looked like when they bought it a couple of years ago. The house was structurally sound, and the interior had fresh paint and carpet, but the exterior was definitely lacking in curb appeal; the house had been vacant for over a year, and desperately needed a little love. The bushes in front of the house apparently hadn’t been trimmed since the last time the federal budget was balanced, the siding was dirty and mildewed, and the shutters were dented, filthy, and spider-infested (more on what we did with the shutters in a future post). Curb appeal on a one to ten scale: approximately 1.3 (if you stood REALLY far back from the curb)…

After moving in, the first-time homeowners focused mainly on fixing up the interior: clearing out cobwebs, repainting some rooms (everything was white), replacing a few windows, and updating some scary bathroom fixtures. After that, they concentrated on the overgrown back yard; it got a good cleanup, and then we undertook the first major project—building a pergola on their backyard cement patio.

Shortly after they moved in, the bushes in front had gotten a haircut, but they grow like crazy, and were huge again before long. The homeowners were never really crazy about the bushy look, which blocked their walkway (and kept a lot of light from reaching their living room). On a recent visit, my son-in-law and I got the directive: Make the bushes go away, and put in a porch railing – it’s time for a new look. We grabbed our implements of destruction including pruning shears, shovel and pickaxe – and hit the yard.

We cut the bushes down to just above ground level, and dug out the remainder with the shovel and pickaxe. After putting in a few new plants my daughter had picked up, we took some measurements and headed off to the home center. We had four spans to fill: two across the front, each of which was just under 8’, and one at each end, at 55” each. The railing sections are available in 6’ and 8’ lengths, so we got two of each, intending to cut down the six-footers for the ends. The kits come with the top and bottom rails, spindles, and support pieces for under the bottom rails.

We went with vinyl porch railings, primarily for reasons of cost and ease of maintenance. I was a tad leery of how sturdy they’d be, but the material is pretty heavy-duty, and the 8’ sections have metal reinforcement in the top and bottom rails, to resist sagging and bowing. They’re easy to work with, the parts fit together well, they look good—and did I mention they’re easy to maintain?!  One caveat though, apparently a math dropout is responsible for the dimensions, or else there are only 92” in eight feet and 68” in six feet now. Be aware and check your dimensions before you make the buy.

Mounting brackets are sold separately, and come in different styles. We got standard mounting brackets for the front railings, and for the ends of the side railings that attach to the 4X4” posts. Since the other end had to be attached to the house, and the house has slanted aluminum clapboard-type siding, we had a couple of options. One was to notch out the siding in the area the railing would attach to, and install a flat piece of wood to mount a regular bracket to. This also involves trimming around the edges of the cut-out area with J-channel to cover the cut edges. The other option is to get an adjustable bracket that can swivel to follow the slant of the siding. This option saves a lot of time and work, and with beer o’clock rapidly approaching, it was a no-brainer.

Porch Railing—Out of the Box, Onto the Porch

The first step is to assemble the spindles into the top and bottom rails. With two people working at it, it’s not hard, and takes about five minutes for an eight-foot railing. The six-footers come already assembled.

When you begin your installation, to get the best look, you’ll want to try to have the space between the last spindle and the post be as similar as possible at both ends of each section of railing. If your railing fits right into the existing opening, congratulations – you’ve got it perfectly spaced! Unfortunately, we had to cut all of ours. Vinyl porch railing components are pretty easy to cut; you can use a hacksaw, or a reciprocating saw with a metal-cutting blade (to go through the reinforcement inside the rails). When you’re measuring, be sure to allow for the thickness of the material at the back of the brackets (where they attach to the post).

We started at one end, figured our reveal to center the spindles as closely as possible, and made our cuts. After that, the attachment is pretty simple. Slide the mounting brackets over the ends of the top and bottom rails, and screw in the support leg under the bottom rail. The shorter, 6’ porch railings have one support, the 8’ sections have two. The leg determines the height of the first porch railing section – set it in position, put a level on it, and screw the bottom, then the top, brackets in place with the provided screws. Make sure the spindles are fully seated in the top and bottom rails, and are as plumb as possible, although when you’re attaching to a 4X4” post, you’re pretty limited as to how much you can correct it.

Round the Bend – Keep It On the Level

After the first porch railing was in, we came around the corner and put the first 8’ piece in, after trimming it for length. Make sure the adjacent top rails are at the exact same height, here and anywhere different rail sections come together, or it will look like crap. We attached the top and bottom brackets to the corner post, then leveled the railing across to the next post to determine where to attach the brackets. Shockingly, the porch wasn’t quite level, which meant our under-rail supports weren’t long enough.

Our brilliant solution was to take one of the leftover spindles (from cutting down the end sections) and cut pieces from it to fit the gap between the floor and the bottom of the rail, attaching them to the bottom railing with silicone caulk. The spindles are the same size as the support brackets, so it keeps the original look, and unless the improvised support pieces take a direct hit or two, they should stay in place with no problem.

The other front piece went on the same way – we made sure it was at the same height as the adjacent piece, leveled it across and attached it, made some custom support legs, and siliconed them into place. The second end piece was off on its own, so we just put it in place at the support leg height, leveled and plumbed it, and screwed it into place.

After we finished, we mulched the new plants and summoned my daughter to survey the finished product. She was thrilled, and provided payment shortly thereafter. (The payment consisted of frosty malted beverages, which we enjoyed while taking in the view from behind the sporty new porch railing). Total cost for the project, including the railings and brackets from Home Depot and some closeout plants from Lowe’s, was about $350 (not including beer, which would raise the total significantly). They’re watching the closeout racks, and plan to add a few more plants to fill in the planted area. The entire project, from ripping out the bushes to settling down with a cold one, took the better part of a Saturday. The improvement in the curb appeal, on the other hand, is something they – and the neighbors – will be able to enjoy for years to come. Maybe even until NEXT time the federal budget is balanced!