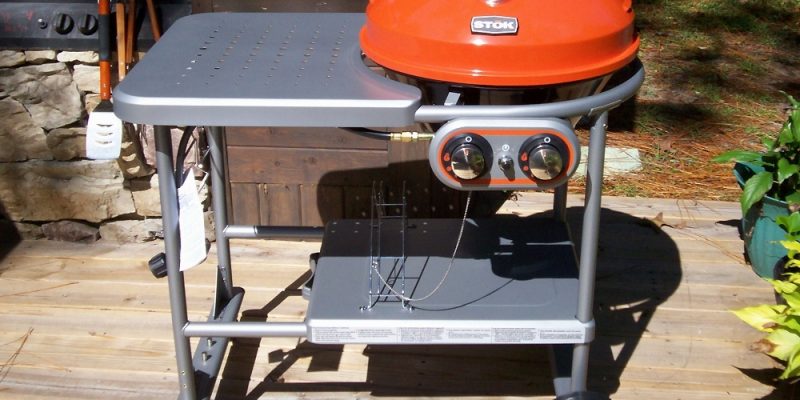 To say I love grilling would be an understatement. It’s the only way to cook steaks, hamburgers and hot dogs to obtain a trifecta of grilled meat perfection. But when it comes to roasting meats like ribs and roasts, I’ve always had a strict policy to cook these meats slow and low in the oven. Yet the Stok Island grill is designed to work more like an oven and a grill. With Spring officially here and summer on its way, find out what I thought about the Stok design and see for yourself if this grill passed my grill-master test.

For me, grilling is simply second nature (I had a grill burn on my wrist by the time I was in kindergarten). The grill has always been something I use to cook with two or three times a week. It frees up the kitchen for non-essentials and keeps the heat, steam and smells outdoors. But when it comes to things like ribs, roasts and other slow-cooked meats, I have always preferred to cook them indoors in the oven. Besides, most of the grills just don’t distribute the heat the right way and the meat ends up drying out on the outside, while the center remains bloody. So, when I heard that Stok was sending HomeFixated the Stok Island Grill for a review, I was “stoked” to see that it’s designed to work both as a grill and as an oven.

After the box arrived, I found out what the real feature of the Stok Island (and the other Stok grills) really was: a built-in grill insert. The grill is circular in design and made from a sturdy, seasoned cast iron. The circular center of the grill is cut out to fit a second removable cast iron grill in the center. With the nifty little (and unfortunately sold separately with some models) handle accessory, you can lift up the grill insert and change it out with a bunch of other great accessories that fit neatly into the provided center opening.

My kit came with a grill handle, a pizza stone, a kabob/rib rack, a beer can chicken insert and a cover. I immediately died and went to grill heaven.

Assembly was simple enough after I got it out of the box and the parts fit together with precision. I’ve put together a few grills before and some of them have been pretty wobbly. I was surprised to find out that this grill was solid from the start to finish. Once it was together, all I needed was to hook up the gas tank and break out my meat.

I started out with a basic grill test that involved hot dogs, hamburgers and a small cut of steak. I’ve always cooked these foods with the heat fairly high and the top of the grill open. I rotate the meat 45 degrees at about 3-5 minutes into cooking, then flip them over and repeat the process for an approximate cooking time of about 5-7 minutes per side. This technique for steaks, burgers and dogs cooks the meat thoroughly without drying out the meat and it gives you some really wicked grill lines that will make Bobby Flay jealous.

Many advise covering the grill with the lid while cooking (including the directions that come with the Stok Island grill). The diffuser helps to cook the meat from the outside perimeter of the grill, but it still went against my grilling instincts, so I removed the diffuser and left the top open when I cooked. Luckily, I only used a few test pieces of burger first because it didn’t go as well as I’d planned. So, I tried it with the top down and diffuser in place. I was astonished to find that it was working well once I followed the directions – who would have thought following the directions would have worked. You tend to get a warm spot towards the back of the grill, but once you know that, you can use it to your advantage when cooking different sized pieces of meat.

The next night I cooked some chicken quarters and found out that they cooked even better than my regular gas grill. I left the table that night stuffed full of delicious chicken and excited to try the remaining accessories.

The real test was for cooking with the insert accessories. We bought some dough, sauce, cheese and toppings for some stone fired pizzas. After you preheat the grill to the right temperature (the awesome temperature gauge in the front lets you know how hot it is inside the dome) you’re supposed to heat the stone on the grill and slide the doughy pizza right on the hot stone in the center of the grill. The problem is that if you’ve ever tried to slide a floppy, uncooked pizza onto a hot stone (which I had not done until this point) you’d better be ready. My first attempt made the pizza pucker up on the side like a toothless man sucking on a lemon.

Once I realized that I needed to coat the stone with a little raw flour first before I slid on the pizza, it was easy pizza from there on out—I nailed it. I slid the pizza onto the stone like a boss, opened the grill 5 minutes into the cooking and rotated it 180 degrees and let it cook for five more minutes. Pizza perfection!

The rib rack worked fantastic. The meat cooked for a few hours until it was falling off of the bone. I had a problem getting it to cook below 300 degrees, but I found that if I tilted the lid so there was a gap in the back, the temperature would go down enough to slow-cook my ribs.

I even tried the beer can chicken. It took about three hours to get done, but we had a pretty large bird. The convenient tray and wire rack prevented the beer can from accidentally tipping over when transporting the chicken to and from the grill.

All in all, I found this grill to be versatile, easy to move around the deck, well designed and tough to beat for its reasonable price point. Accessories will cost you a bit more but with stuff like a wok, vegetable basket and smoker, but they’re well worth it to get your own gourmet grilled food cookin’!

You can find the Stok Island Gas Grill