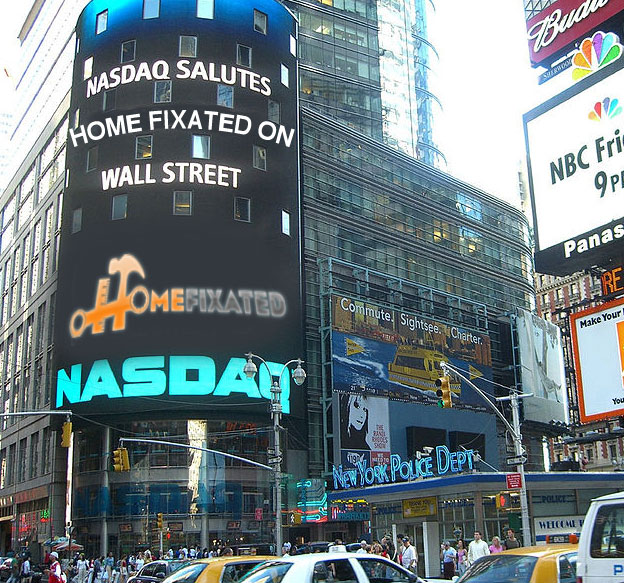 Although not quite on the level of Facebook’s IPO, HomeFixated.com is very proud to announce that they are the first tool, home-improvement and humor website to initiate and successfully complete an Initial Public Offering. HomeFixated.com has gone public! Despite a tenuous economic recovery, all the stars came into alignment on what was a major team effort. It’s proof-positive that online media is no longer viewed as the lost, forlorn, neglected child of the larger media family.

Tool companies and other home improvement brands have been spending millions of dollars on print advertising over the years, however it wasn’t clear industry would embrace the online realm with the same financial vigor. However, strong signals pointed in online media’s favor. Major tool brands wouldn’t think twice about sinking hundreds of thousands of dollars into ad campaigns with print media, but strangely, consumers rarely go to print when they’re looking to buy.

“When a consumer is ready to buy a power tool, they don’t rummage through their box of This Old House back-issues” said Wally Sheissmund, Director of Marketing for HomeFixated.com, “They do a web search and then land on one of a dozen or more tool and home-improvement web publishers like HomeFixated. It’s on those sites that they do their research, inform themselves, take naps after getting the web-browsing-sleepies, and, eventually, get really excited about buying a new tool. Let’s face it, if print media were any more dead, it’d be a zombie, after it had been decapitated by a chainsaw.” Although the Internet as we know it has been around since the 1990’s, it seems more nimble and forward-thinking portions of the business world are finally coming around to realize the power of online media.

With some of the recent bad press with certain financial institutions, HomeFixated.com was also able to secure some very experienced collaborators, including the beleaguered Goldminn Sacks. “We were happy to secure GS as our investment banker, despite someone’s characterization of them as blood-sucking leeches” said Jeff Bankstronium, who served as HomeFixated.com’s interim CFO during the IPO transition. “They actually provided very favorable terms to us, partly due to the inherent brand value proposition HomeFixated.com offered them. Goldman Sachs knows a household name when they see it. You could almost see the dollar signs in their eyes.”

When asked if he was surprised that HomeFixated successfully went public, HomeFixated’s Founder, Executive Editor (and now CEO), Marc Lyman had this to say:

I always believed it was only a matter of time before carefully-crafted, stylishly-written, cleverly-worded, entertainingly-informative, methodically-hyphenated content would be recognized by the business community. I was a little surprised that AskTheBuilder.com, with its 500,000 million hourly readers, didn’t beat us to the IPO. But, by being first, I think we have blazed a path for everyone from mommy bloggers to foot fetish sites to go public too. We are truly honored to be first, and we’ll be happy to see others follow behind us. Way behind us. In our dust.”

What does this mean for the dozens and dozens and dozens of HomeFixated loyal readers and fans? “Cooler video intros, and some nice customized HomeFixated.com logo Koozies” said John Brandstones, HomeFixated.com’s new Director of Purchasing and Office Entertainment, “Frankly, we have a lot of extra cash on-hand now, and we’ll make sure readers benefit from at least a tiny, fractional percentage of that investment. We also plan to get several company Hummers, a modest corporate jet and a 64,532.3 square foot renovated warehouse/night club in downtown San Diego. We might even pay our writers a semi-living wage, but that’s still subject to board approval. Oh, and more snacks. And a ping pong table. Maybe a hostile takeover or three as well. . . we have our eyes on ToolSnob, ProToolReviews, CopTool, HomeConstructionImprovement, ToolGuyd, ToolsInAction, Charles & Hudson, ToolSkool, ToolRank, One Project Closer, ToolMonger, and AConcordCarpenter, just to name a few. We’re also thinking about taking over some of the print brands like This Old House, Extreme How-To, and Fine Homebuilding, primarily because the toll paper cuts take on society is just too great.”