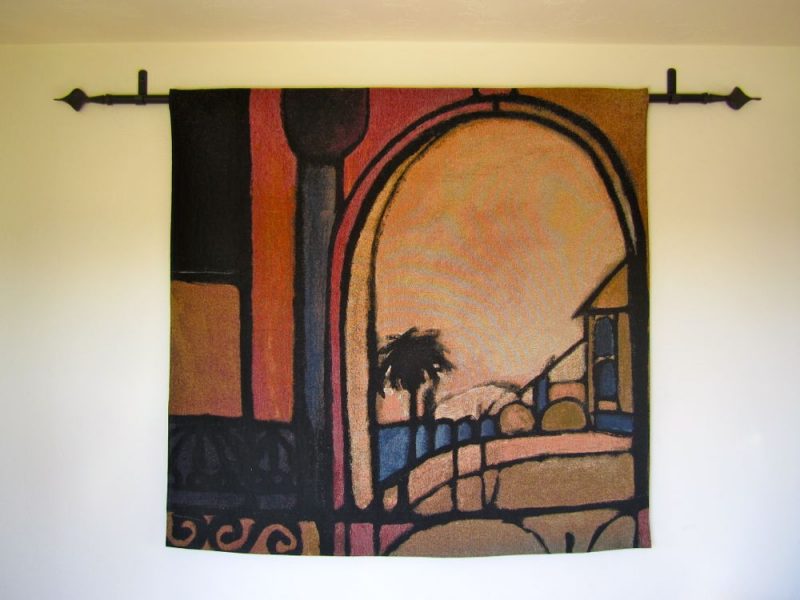 Normally we’re talking about brutish power tools and rugged home improvement projects. But occasionally, we like to tap into our inner Christopher Lowell and get our decorator on. So today, we’ll be talking tapestries baby! Just to stay grounded in our HomeFixated roots, our little tapestry project also involved some optional metal fabrication with a grinder. More on that to come. Tapestries can be great decorative items, but in our case we were installing them to deaden the sound in a plaster-walled office. Without soft surfaces, a plaster room with hardwood flooring can sound more like an echo chamber than a cozy room. Since I don’t consider myself an expert on tapestries, I embarked on my typically obsessive hunt for tapestries and installation methods online. In the process, I learned a few tips and tricks I’d like to share with you.

Although some folks just throw a carpet remnant on the wall and call it a tapestry, I was on the hunt for something that tied in with the design and style of our home. A properly made tapestry will usually incorporate two key features that will make your project more successful, a pole pocket at the top for hanging the tapestry, and weights sewn into the bottom hem to help it hang steadily. If you’re using an improvised tapestry (some 70’s shag? burlap? your favorite blankie?) then an alternative to the pole pocket is using curtain rings with clips on them. Curtain rings with clips can be found at your local big box or at home stores like Ikea. I wanted to hang something other than a fleece blanket, so I hopped on ebay and eventually stumbled across two designs I liked from a vendor called Tapestry Showroom

. They had a 100% satisfaction rating with well over 6000 transactions, so I figured I was in good hands. They also sell tassels, but I had not channeled enough Christopher Lowell to want tassels in my office. Once I paid for the two tapestries, it took about two weeks before they showed up in the mail. I believe they are actually hand-sewn in the US before being shipped (or at least the two I ordered were). 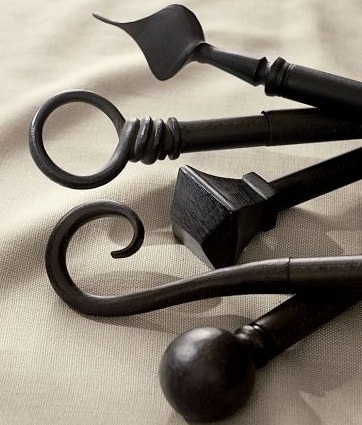 There are a lot of options when it comes to hardware for your tapestry. I looked at a many rods that were specifically for tapestries. I personally found them a little too dainty and ornate for my particular tastes. As you can see, I could only channel Christopher Lowell for so long and his influence began waining in my project. Instead, I opted for some burly, cast iron style curtain rods from Pottery Barn, seen to the left here.

I wanted the rods for the tapestries to tie in with actual curtain rods I was using in the same room, so I sourced them all in one place and just chose different filials to set the tapestries apart a bit. The one thing I did not take into account is was how far out the hardware would leave the tapestry from the wall. It was time to stop channeling Christopher Lowell and start channeling one of the dudes from American Chopper, because I’m pretty sure Lowell doesn’t use a grinder.

Once I realized the hardware brackets I bought were going to leave my tapestries several inches from the wall, eating up already scarce airspace in the office, it was time to improvise. I realized that one end of the brackets would actually make a perfect hook to mount the rod on, leaving the tapestry almost right up against the wall. Definitely take into account how far your hardware extends from the wall and you can save yourself some grinder work. Also, be sure that the filial (whatever decoration goes at the end of the rod) isn’t very big. If you have a giant orb at the end of the rod, you won’t be able to mount it flush with the wall. I deliberately chose a turned leaf design which I prefer to describe as a spear since that sounds cooler. It is relatively flat, and that design enabled me to mount the rod very close to the wall. I secured the brackets in one of my favorite new shop additions, a Wilton Vise, and then fired up my Bosch grinder. I first cut off the unwanted portion of the bracket and then used the grinder to shape a rounded profile. Once I had all four ground to shape (two for each tapestry), I used some permanent black marker to paint the thin raw metal exposed on the bracket. Since the metal would be up by the ceiling, I wasn’t too worried about painting the edge for a perfect finish. It’s not really visible from the room anyway. Thanks to the grinder idea, I recovered from my mistake in bracket choice. Time to install.

Step 4: Installing the Hardware and Mounting the Tapestry

In a perfect world, it’s nice to mount your hardware into studs. If you’re looking for a stud finder, we personally like the Stud4Sure, which uses a low-tech magnet to find nails or screws holding your drywall to the studs. If you’re not able to mount on a stud (I’m seriously biting my tongue here, especially after all the Christopher Lowell references), make sure you’re using suitable anchors for whatever wall type you’re working with. Unless you’re planning to do pull-ups on the tapestry bar, most drywall anchors are likely suitable for this kind of task, assuming your tapestry isn’t woven from gold strands and that it weighs less than 10 pounds. I completely cheated on the install and used a laser level since I was installing not only the tapestries, but also a couple regular curtain rods at the same time. If you don’t happen to have a laser level, a conventional level works too, or lastly, you can just measure down from your ceiling (or up from the floor) an equal amount on each side of the rod. Once you have the brackets mounted, just thread the rod through your tapestry’s pole pocket and attach or hook the rod in place. Voila!

The finished project managed to decorate two massively white expanses of empty plaster walls. More importantly for me, it changed what used to feel like an reverberating auditorium into a much more cozy feeling office space thanks to the improved acoustics. Whether your motivation is decor, acoustics, or both, tapestries aren’t just for medieval castles. Just go easy on the tassels and unicorns, ok?