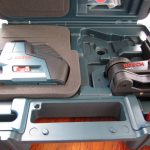 The use of lasers domestically was once so simple. Most were laser pointers, and used primarily for a) Making cats chase the dot around – hilarious by the way b) Getting arrested when pointing them at aircraft – don’t do this please c) Pointing the dot at someone’s chest to make them think a swat team sniper had them in their crosshairs. Oh, and occasionally they actually got used for things like pointing at stuff for presentations. Well, it’s 2010 folks, and lasers have evolved. In fact, what used to be accessible only to commercial construction crews, is now starting to fall within reach of remodelers and DIYers. Which is why Bosch sent us their GLL2-80 Dual Plane Leveling and Alignment Laser to review. 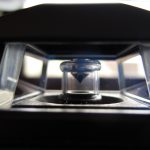 The GLL2-80 Laser features two beams that project an almost continuous line in either the horizontal or vertical planes, or both. I had a chance to talk with some of the Bosch crew about the product and its development. Unlike some of it’s more expensive siblings (that use rotary lasers), the GLL2-80 uses two finely engineered cones to actually split a single laser beam into a 360 degree line. Pretty amazing when you think about it. That tiny little laser has to hit the tip of that tiny little cone. It’s like a little micro engineering miracle happens everytime you switch the laser on. Just for fun, I asked the Bosch product manager exactly how they make a little cone like that precise enough to work its magic. He then gave me that look of, “I want to tell you, because it’s really cool. . . . but I also would like to keep my job.” Oh well, we’ll just chalk it up to anal retentive innovative German engineering. 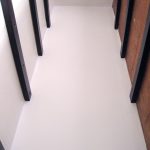 So, what exactly is a homeowner, remodeler, DIY-type going to do with the GLL2-80 dual plane laser? A number of typical things come to mind, such as hanging cabinets, doing tile work, aligning walls or framing, and installing mirrors or shelves. There’s also an endless supply of not-so-typical projects that you’ll find a laser like this handy for. I used it to align home-made shelf mounts inside a cabinet, aligning light fixtures on a ceiling, extending a stud line from my CH Hanson Stud4Sure Magnetic Stud Finder (without marking up the wall), and an acid/ecstasy filled trip-hop laser light dance party. Don’t worry, I’m just kidding! I didn’t really use it for aligning light fixtures. If you have one handy, you’ll actually be amazed how often you’ll reach for it. 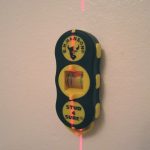 You can use the GLL2-80 laser in two modes.  One mode locks the lasers in place.  This is handy for setting a laser line that you don’t want to be level or plumb, such as mounting hardware for a stair rail.  The other mode unlocks both axis so they automatically seek level and plumb.  The unit even sounds a loud and (deliberately?) annoying beeping alarm if you orient the unit in such a way it can no longer provide a level or plumb line.  The alarm is handy if you’re putting the unit on a sloped surface that exceeds the parameters for level or plumb. This saves you the embarrassment of accidentally treating a straight laser line as either plumb and/or level when it’s not. I like to call that kind of accident “the axis of evil.” When you switch the unit off, it also locks the self leveling system (presumably so you don’t destroy it during transportation). The self-leveling system is a big step up from the less accurate bubble levels used on lower-end laser options.

The GLL2-80 laser also comes with a positioning device called the WM1. You can see it in the box in the image at the top of the article. We can only guess what WM1 stands for. I’m going with “Wickedly Mobile” uh “One”, or maybe, “Wunder Mount Eins.” Like the laser unit itself, it features two different sized screw taps for a tripod mount. It also has some robustly strong magnets on the back which can be very handy if you have a metal surface or pole to mount to. Bosch also makes a pole if you’re into that kind of thing. FYI, it’s designed to hold the laser, not for any provocative acrobatics you have in mind, ok? There’s even a hole in the top of the device you could use to hang the laser on a nail or screw. The positioning device has a little dial you can rotate to very precisely fine-tune the height of the laser. There’s also a knob to let you lock the height in place. The Wunder Mount Eins is useful. 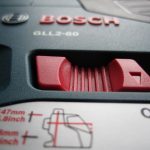 Are the Bosch GLL2-80 and other lasers in its class essential tools for home improvement or DIY overkill? I think the answer to that depends a lot on your budget and what types of projects you tend to work on (and how much you like impromptu home laser shows). If you’re regularly doing DIY projects around the house, I suspect you’d find a use for it pretty quickly. And when you do, it can be a real time saver as well as make for more precise and professional results.  So if you have a decent tool budget (or if you’re just addicted to home improvement tools in general), I highly recommend it.  Although the list price is much higher, you can find the Bosch GLL2-80 Dual Plane Laser on sale for about $270 at our sponsor Ohio Power Tool.