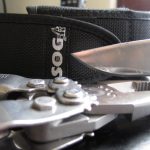 Back at this year’s National Hardware Show (when I wasn’t busy flirting with the booth babes), I had chance to chat with Chris Cashbaugh of SOG Knives about two of their more popular products; the Flash II Assisted Opening Folding Knife and their Power Assist Multi-Tool. Both the folding knife and the multi-tool offer some unique features that will appeal to DIYers and home improvement professionals. SOG sent us both products to review, and we’ve had several months to put them through their paces. You’ll find our impressions and the original demo videos from NHS in our full reviews. We’re covering the Flash II FSA-98 folding knife today, followed by their multi-tool next week.

The SOG Flash II folding knife appears to be like most ordinary folding knives until you open it. The Flash II features SOG Assisted Technology which springs the blade fully open after just a little assistance from your thumb. The result is a switch-blade-esque effect, without the whole “illegal” part that goes along with switchblades. The assisted technology is addictive. You’ll find yourself opening and closing the blade for no apparent reason, other than juvenile amusement. Because of this addictive quality, we recommend you restrain your SOG Flash II experimentation to private settings. The last thing you want to do is acclimate yourself to the opening mechanism while waiting in line at the bank. If you don’t follow our advice and accidentally get arrested for bank robbery, please let us know as it would be a great publicity opportunity. No, we won’t bail you out. 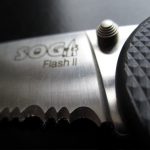 The assisted technology does take some getting used to. As a long time user of SOG competitor SpyderCo‘s folding knives, I was curious to see how they compared. In fairness to SpyderCo, the Delica model I use is about a decade old. Despite the age difference, the knives are both folding knives and have some basis for comparison. In SOG’s favor, I like the way the pocket clip on the Flash II is both secure, and allows for the knife to be carried entirely in the pocket. On the SpyderCo Delica, the pocket clip is mounted in from the end of the knife, which results in some of the knife protruding from the pocket. This position has also resulted in the Delica popping out of my pocket a couple times (SpyderCo has since modified the clip design). Knives falling out of your pocket can be awkward, especially at events with toddlers, or, at the bank. The SOG Flash II has a nice solid clip that also doesn’t scream “Hey look I’m carrying a folding knife” to the casual observer. A small allen screw lets lets you change the pocket clip from either a left hand or right hand carry on the SOG. 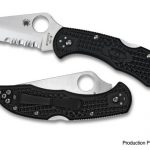 In SpyderCo’s favor, I felt more comfortable pulling the knife from my pocket and opening it without looking at it. SpyerCo’s signature large circle drilled out from the blade just feels more comfortable to me than the small thumb stud you use to open the Flash II. There is also the question of the built-in safety on the SOG Flash II. I think it’s probably a feature that should be on a tool that can theoretically pop open unexpectedly if the thumb stud were to catch on a pocket. On the other hand, if you use the safety, it means you’ll likely want two hands to deploy the knife (one to hold the knife, the other to switch off the safety). Since the thought of the knife accidentally springing open in my pocket was not appealing to me, I carried it with the safety on. The downside to the increased safety is a substantially slower and more involved blade deployment when compared to to a traditional folding knife like the SpyderCo Delica.

Once deployed, the SOG Flash II features a very sharp blade and well thought out ergonomics. The textured grip on the Flash II provides a secure hold, although I found it to be a little on the thick side. All in all, if you’re looking for a versatile folding knife, the SOG Flash II FSA-98 is a solid performer. The spring assisted opening mechanism makes for a speedy deployment with minimal effort. As much as I like the Flash II, it’s a little bigger than I’m used to. Also, given my concerns about speed/ease of deployment when used with the built-in safety, my daily carry will still be the SpyderCo Delica for now. That may just be 10 years of loyalty to SpyderCo talking though. The Flash II currently has close to five stars on Amazon. You can pick up the SOG FSA-98 Flash II, 1/2 Serrated model

there for a very reasonable $40.