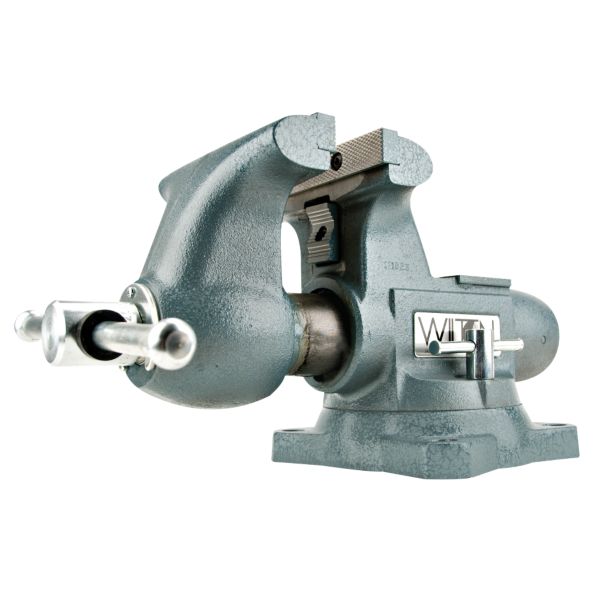 As much as I love my Rockwell Jawhorse, there are many times when I prefer the precision and rigidity of a bench vise. At last year’s STAFDA trade show I was initially lured into the Wilton booth with their unbreakable BASH (Bad Ass Sledge Hammers). After learning about these brutish sledges, my attention was drawn like a tractor-beam to a brawny line of sleek vises. I’m not one to lust after the rear end of vise, that would be totally creepy, but there I was, transfixed to the rear end of the Wilton vise lineup. Not only did they sport a unique design, but they are made a country you’d never expect for beefy metal tools. Wilton graciously sent us a Trademan 1745 vise to review, and I’ve had some time to put it through its paces. Since I already used up all my Vanilla Ice “Vise Vise Baby” humor on my State of the Vise Grip post, I’ll stick (mostly) to the facts and dive right into how the Wilton vise fared. 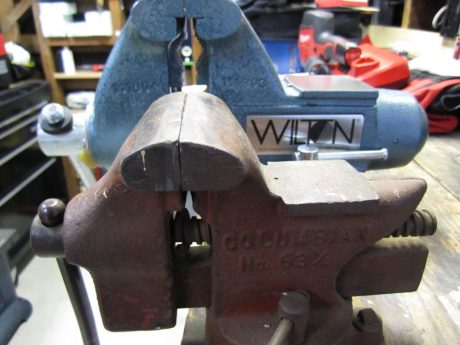 Out With The Old Bench Vise, In With the New
Farewell humble Colombian Vise # 63 ½. This trusty little vise has been bolted to my workbench for close to eight years now. It came with the house, which I was pretty ecstatic about at the time. In California, anytime you get anything “free” with a used home purchase (other than termites, earthquake damage or scenic wildfire views), it’s cause for enthusiastic celebration. The old Colombian was drafted into service for everything from light-duty metal fabrication to woodworking. It served me well, but was a little bent, loose and not quite as grippy as it used to be (several decades ago). The new Wilton stepped in with an impressive 4-1/2″ Jaw Width, 4″ Jaw Opening, and 3-1/4″ Throat Depth. You can see the Tradesman also dwarfed my old vise; a tiny vise this is not.

Installation
Installation on the Wilton 1745 is about as simple as it gets assuming you have a suitable workbench to bolt it too. You’ll need four hefty lag bolts or four hefty bolts and nuts depending on your work surface. If you’re not using lag bolts, I’d recommend some Loc-Tite or Nyloc nuts to resist vibration and keep things secure long-term. You’ll also need at least four washers (four for the top, possibly four for the bottom of your bench).

Whatever bolts you’re using, make sure where you’re installation of the vise won’t cause interference with any drawers or other moving parts of your workbench. Wilton conveniently included a paper template for marking hole locations (pre-drill!), however I found a Fastcap long-nose marker worked just fine without the template. This vise is large, so be sure to take into account traffic flow in your shop and where the vise feels most comfortable to you. You’ll also want it positioned so you don’t smash your knuckles when wildly spinning the tension bar around. I’d recommend clamping the vise in place in a couple spots and checking position and feel before you settle on its ultimate location. Finally, make sure your work bench is solid and stable. There’s not much point in installing such a solid, precise piece of gear if your table goes flip-flopping around the shop the first time you bang on something in the vise.

A Bench Vise Born in the USA


If you’re like me, you assume just about any tool that involves large quantities of beefy metal is made in China. Although a couple of Wilton’s more price sensitive models are made in China, the 1745 and most of their higher-end vises are made right here in the USA. If you like to buy American, or you just want a tool crafted to last, save yourself some heartache and start looking at Wilton first.

Remember that Jaws villain from the Bond movies? Well, the Wilton 1745’s replaceable jaw inserts (seen above) made his toothy grin look like dainty headgear hardware on a 12 year old girl. At the top of the vise, two serrated (and reversible) jaw inserts dominate. If you reverse the jaws via the two allen bolts on each side, you’ll find a smooth surface on the back side. Below the main inserts, two wicked curved and griptastic pipe jaws are ready to bite down on just about any round stock you dare feed this beast. Wilton thoughtfully included a smaller curved recess for smaller diameter pipes or solid rod. Above the smaller grip area, larger curved recesses are ready to clamp down. Between the two jaw sizes, official spec’s are ½” – 2 ½” of pipe chomping capacity. All teeth in the universe eventually become a little less sharp, even Jaws’, so we like the fact that you can swap out all four jaw inserts should these become worn.


The design of the rear end of the Wilton 1745 vise (and several of their other USA made models) is a standout feature you just don’t see on most run-of-the-mill vises on the market. Most vises have an exposed screw mechanism that juts out. Despite it’s functional nature, that exposed mechanism also serves to collect dirt, sawdust, metal filings, and crumbs from shop snacks, none of which contribute to the smooth operation of the vise, or to its longevity. Exposed screws on vises are also “great” for snagging power cords as you navigate around them. The Wilton 1745, on the other head, simply has a smooth solid metal “cap” that seals the end. Stylish form meets clean function. Sir Mix-A-Lot would approve. If he liked vises, he’d be begging for a piece of that bubble. Less hip-hoppy details on this design come straight from Wilton:

Unlike most vises that have a fixed center nut the Tradesman round channel vise nut is anchored at the rear. This rear anchored nut provides straight line pull and even pressure resulting in greater durability. The round channel design also allows for a completely enclosed spindle and nut assembly. This enclosure keeps debris out and lubrication in for a lifetime of smooth operation.

Performance
Wilton spec’s out the Tradesman 1745’s with 60,000 PSI, straight line pull, precision steel slide bars and what every mixed martial artists dreams of: unbreakable nuts. What does all that translate to, and how does the Tradesman 1745 compare to a conventional vise like my vintage Colombian? For one thing; serious gripping power. On my old vice, I’d practically have to jump on the tensioning bar to lock down a piece of metal securely. Most projects would find me retightening tension repeatedly. By contrast, the beefy bar on the Tradesman applies such firm, even pressure I was more worried about crushing whatever it was I was clamping. A little turning of the lever goes a long way. If you’re working with soft material, definitely avoid the rookie mistake of over-tightening.

As you can see in the shower of sparks below, my first test run for the Tradesman Vise was doing a little metal fabrication. I had four pieces of L-shaped hardware that I needed to cut and shape with a grinder. Amazingly, once I clamped each piece in place, I did not have to re-tighten the vise once. Other vises I have used always seem to have a bit of slack/play that ultimately makes for a loosey-goosey grip on work pieces. The Trademan 1745 had no discernable wiggle and powered down with unwaveringly smooth and even grip. 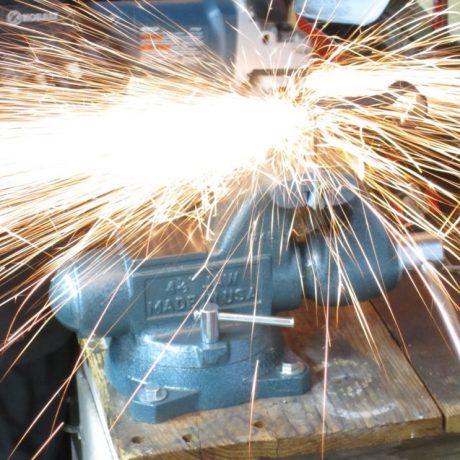 What Comes Around Go Around


Thanks to its ability to swivel completely around, I was able to lock down the bench vise 180 degrees from its usual position on the benchtop. This enabled me to get a great working angle on the metal without the vise handle in my way and also helped me direct the shower of sparks away from me and the most combustible parts of the garage. The Trademan 1745 employs two smaller tension bars to securely lock down the pivoting of the vise. This design (aside from having two bars vs one), hasn’t changed much in the vises on the market. The only issue we had with it on our vise is that whenever we locked down the vise, one of the two bars was always left jutting out at 90 degrees from the vise body. I’d like to see Wilton vise engineers put a new spin on this design and come up with a pivot lock that enables you to nestle both bars next to the body of the vise. Or simpler yet, tension the bars so that a firm lock is achieved with both bars tucked into the sides of the vise, right out of the box. There may also be some variation from vise to vise on this, so yours might not have the same issue our model did. As most of you know, I’m obsessive about small details like this, but it’s really the only thing I could find any fault with.


If you like bending paperclips, collecting shop debris, and re-tightening your vise, then this isn’t the bench vise for you. If man-handling metal, pipe and timber with powerful precision is more your speed, we highly recommend the Wilton Tradesman 1745. Its even, smoothly-applied and ridiculously tenacious grip let you stay focused on your work-piece, not your vise. The 1745 has a lifetime warranty, and unlike many products with a lifetime warranty, it seems built to never need it. Weighing in at slightly over 40 pounds, we were happy to see the Wilton Tradesman Vise packaged in something a little more rugged than the thin cardboard many tools come in these days. We were able to find the Wilton sold locally via several construction supply houses. You can also find the Wilton 63199 #1745 Tradesman Vise 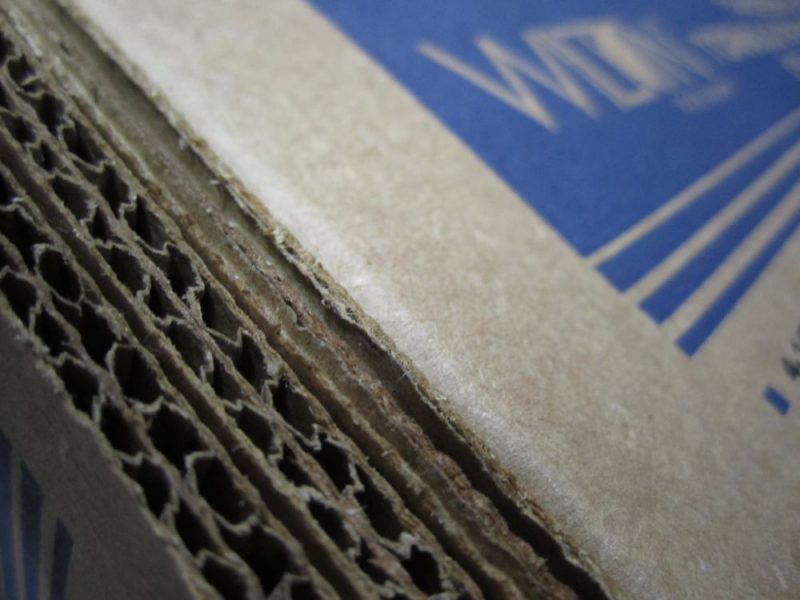 via Amazon. At around $400 it’s definitely a premium vise, but if you’re serious about your vises (not vices), it’s likely a single tool you can buy for life. Just make sure you unbolt that thing before you sell your house!