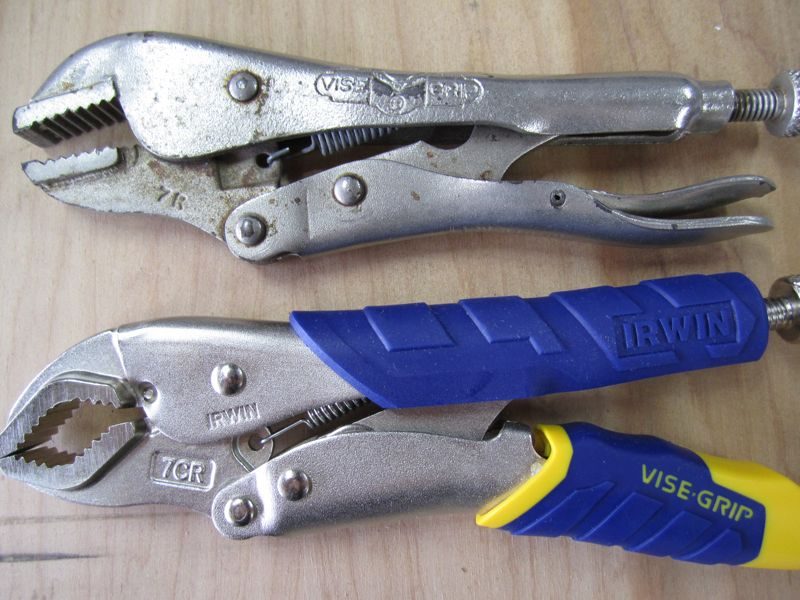 Insert cheesy beat circa 1990. Alright, stop, collaborate and listen. Irwin is back with a brand new invention. Something grabs a hold of bolts tightly. Flowing like a harpoon daily and nightly? Those prior sentences, and this post’s title, will make absolutely no sense, unless you “accidentally” memorized Vanilla Ice’s Ice Ice Baby lyrics a couple decades or so ago. But let’s step away from the drum machine and get back to talking tools. Vise Grip Pliers, they’ve been squeezing things since 1924. That could be a great new slogan for Vise Grips and for most politicians too. In more recent history you might have noticed Vise Grips are actually Irwin Vise Grips. How does the modern equivalent compare to your old-skool vise grips?

Like most of the US population, I’ve always had at least one pair of Vise Grip pliers readily accessible (see below for an example from my toolbox). In fact, IRWIN believes there are about 300 million VISE-GRIPS in existence world wide. That’s the equivalent of almost every man, woman and child in the US owning a Vise Grip. Pretty amazing. It wasn’t until attending the 2010 STAFDA trade show show and Irwin’s Ultimate Tradesman Championships in Bristol TN earlier this year that I became hip to some of the newer things Irwin has cooked up for the Vise Grip line of locking pliers. There’s more to the modern Vise Grip than your grandpa’s Vise Grips. 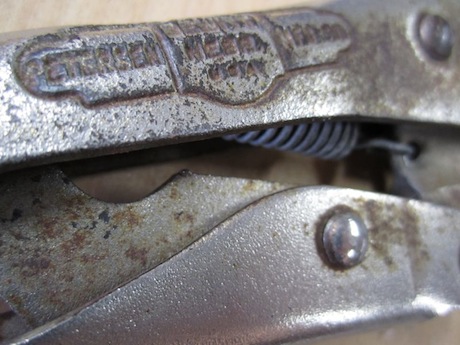 History
Since HomeFixated has an immense reputation of providing education as well as entertainment (notice I didn’t say anything about the quality of the education), we’d like to kick off this article with a brief history lesson from Irwin.

In 1924, William Peterson, a Danish immigrant blacksmith, had an idea in the small town of DeWitt, Nebraska. He invented the world’s first locking pliers in his very own blacksmith shop. He began selling them from the trunk of his car to farmers and neighbors in surrounding towns. He patented his new idea, and called it VISE-GRIP. The familiar VISE-GRIP Original™ locking tools, with the classic trigger release, continue to be a favorite. IRWIN continues to evolve, adapt and grow to meet the needs of today’s tradesmen across the globe. Today, IRWIN is a global company taking the VISE-GRIP to countries all over the world. In fact, IRWIN does business in over 150 countries and five continents. IRWIN guarantees that tradesmen all over the world can continue to count on best-in-class tools, which are manufactured in all parts of the globe. The company’s North American headquarters is located in Huntersville, North Carolina; and the European headquarters is based in Geneva, Switzerland.

The Vise Grip line has firm roots in the US. However, to my knowledge no Vise Grip models are still made in the USA. If you’re looking to grab a couple Made in the USA Vise Grips, you can still find a few in closeouts or backstock at vendors like Harry Epstein Co. I’m going to throw out a radical idea here. I think it would be cool if Irwin produced a signature “Made in the USA” model. Economics being what they are, this single model would likely cost far more than the overseas models. But it could also incorporate premium quality and features that what’s left of US tool manufacturing is known for. It would also give the vocal “Made in the USA” folks a chance to put their money where their mouth is. Either they step up and spend a bit more for a US tool, or they stop complaining about how everything is made in China and spend less on an overseas model. I’m pretty sure this isn’t going to happen in the short term, but it would be interesting to see how something like this, aggressively marketed, would do in a tool marketplace dominated by overseas production. And not just with Irwin. The Made in the USA model still works for some premium brands. I think keeping a toe in US manufacturing can also be a solid branding and marketing move if done right. Enough talk of manufacturing though, let’s get into the epitome of the modern Vise Grip.


Irwin sent us a few sizes of their relatively new CR (Curved Jaw) Vise Grip pliers. Irwin rates the CR line as delivering three times the gripping power vs. traditional locking pliers. That’s an impressive number, and one we’ll tackle in our usual unscientific seat of the pants testing below. The CR is available in two core models, a Fast Release which features a triggerless release and anti-pinch, non-slip Pro Touch grips, and the Original, with the classic trigger release your grandpa (or grandma if she was sporty that way) would be comfortable with. We used the Fast Release versions and I can’t really see why you’d want to stick with the traditional style. In addition to a much more grippable grip, releasing the tool’s grip is much easier without the traditional trigger (and depending on your strength and the lock-down pressure, you can potentially release it with one hand).

According to Kurt Weber, Director of Marketing for Irwin Tools:

Other manufacturers’ traditional locking pliers only allow a couple of contact points on a round or hex work piece, resulting in the tool slipping or failing to loosen a frozen bolt. The Irwin Vise-Grip CR, on the other hand, establishes multiple contact points with the work piece, guaranteeing a significantly tighter grip. They cannot be beat for tightening, clamping, twisting and turning. In fact, they totally kick ass!


Another big selling point of the Vise Grip CR is the way it actually locks down on material. In tool-speak, this “self energizing jaw” puts pressure on multiple points not unlike the Irwin Groove Lock and Knipex water pump pliers we liked so much. When combined with the CR’s patented curved jaw, we’re talking serious grip on round stock, and both hex and square bolts. As you can see from the photo here, we didn’t just take Irwin’s word for it though.

Vise Grip CR vs Traditional Vise Grip
We pitted these modern Vise Grips against one of their very used siblings, and we noticed quite a few differences in the process. First and foremost the self energizing jaw is no joke. Since we still had the metal bar Knipex sent us when we tested their adjustable water pump pliers, we decided to do the same extreme test for the Vise Grips (old and new). We locked the both the vintage and the new CR plier (both 10″ models) onto the horizontal test bar and then tried to stand on them. Not surprisingly, the vintage straight jaw gripped like a pre-spinach Popeye with lube on his hand. The CR was tenacious, and it held strong with my massive, crushing, epic 150 pounds standing on it. The CR was decidedly less “explosive” than the traditional trigger release when I removed the piers from the test piece. In fact, Irwin says they’re twice as easy to release.

So, if you’ve got a 30 year old Vise Grip that’s looking a little rusty, don’t throw it away. . . you never can have too many Vise Grips around. However, you might consider upgrading if you like more a more powerful and comfy grip, an easier release and less likelihood for pinching.
With a suggested retail of $11.99, $12.99 and $13.99 for the 5″, 7″ and 10″ respectively, you can find the Irwin Vise Grip CR

pliers in various sizes on Amazon. In addition to the curved jaw CR model, The Fast Release line is available with straight jaw, curved jaw with wire cutter, long nose with wire cutter, and locking C-Clamp versions. Oh, and if you’d like to be transported back to the horrors of 1990 hip hop, you can check Vanilla Ice here: