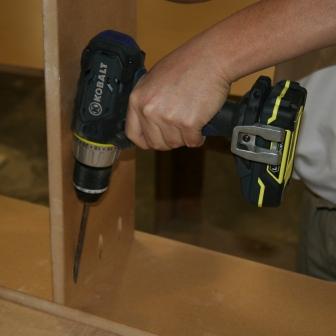 No, we’re not talking golf here – we’re talking cordless drill drivers – specifically the 18 volt cordless drill/driver from Kobalt. The folks at Kobalt were kind enough to send HF the KT200A to give it a good workout. The short version is it’s a half inch cordless drill/driver that recharges quickly and packs a good punch. It comes with two batteries, charger and a carrying case and can only be found at Lowe’s. The long version can be found at the special features site for the Kobalt drill driver  where they have all the specs and a video to boot.

OK, time to go test this bad boy out. There’s nothing like the look you get from your wife when you tell her as you’re leaving that drilling and screwing are the plans for the day. Next time I will make sure that she is nowhere near anything grab-able and fling-able. Nolan Ryan would have been impressed – she’s got a good arm. Equally impressive were my old dodge ball moves that let me get to the car unscathed.

The Kobalt Drill Driver Performs Smartly on a Stupid Job

Our offices at Miller Woodworking are in a constant state of remodel. That meant there were plenty of ways to test out the new screw gun. First I had to take apart the toe kick that someone made 98 inches instead of 86. When questioned, the suspect responded with, “I think I read the cut list upside down.” Wha????  At least the cabinet came out at 86. Wait a minute! You made the cabinet and toe kick two different sizes? Didn’t you think that…  Never mind, Brad.  Just move on.

I needed to take out the pocket screws holding the supports to the finish face of the kick, cut it down and put it back together. Whenever you take out and put back in pocket screws there is a tendency for the pocket screw to go a little deeper than the previous time. This is when an impact screw gun is dangerous. But using one of the 22 different torque settings the Kobalt KT200A comes with did the trick. I set it to just snug up and not bury itself any deeper into the toe face and it worked great.

Installing the toe kick and cabinet meant I could test out the drilling end of the gun with my countersink bit and the driving end with my Phillips bit. I set the torque factor to drill and it showed plenty of power in drilling and countersinking my screw holes. Changing the bits back and forth using the keyless chuck was a snap. Driving my screws home was also a breeze and whenever I was in a tight, dark corner the light that comes on when you pull the trigger made my life just that much easier.

Once I had the counter top on, there was one last test for my new toy. Ah, yes. Always the screw gun’s nemesis, the ubiquitous grommet. The killer of many battery charges, I was going in especially deep using three inch grommets. The result: Not a problem. It stopped a few times but that was preferable to having my wrists tweaked.

All in all, this gun was excellent in handling, drilling, and driving power. The battery fully recharges in twenty minutes and the charge lasts for hours. You can even push a button on the battery to see how much charge is left. I really liked it.

When I called my wife and said I was done screwing around for the day she hung up on me. Wha??????