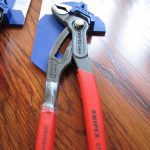 At last year’s STAFDA trade show we spent some quality time talking with the reps at Knipex and Irwin about their respective lines of push-button style locking pliers. As Knipex prefers to say, they’re “selbstklemmend!” That’s “self-locking” for the few of you that don’t speak German. As a longtime Channellock user, I was intrigued by what I saw.

Despite the very similar functionality between the Knipex Cobra and Irwin GrooveLock self locking pliers, I also noted enough subtle differences that I thought a tool comparison was in order. Both Knipex and Irwin sent us several pliers to help us conduct a review. We sent one Knipex Cobra and one Irwin GrooveLock with Jason Dutra of Dutra Plumbing to get his on-the-job feedback. The remaining pliers stayed here for some conventional and unconventional testing. Speaking of unconventional testing, Knipex even went the extra mile and sent us a beefy steel bar that’s seen in the STAFDA trade show demo we filmed (more on that later). If you have a special place in your heart for your Channellock pliers, you’ll definitely want to read on for the full review and comparison.

First, lets cover the basics of how both the Knipex Cobra and Irwin GrooveLock self locking pliers function. These pliers have a simple push button that allows precise adjustment of the jaw opening. Unlike conventional Channellocks, these self locking pliers have substantially more adjustments. You also don’t need to swing the pliers all the way open to adjust them. Instead, a simple press of a button lets you freely slide the jaw opening to exactly the right size you need. If you’ve ever suffered a blood blister after the handles of conventional pliers attacked your hand, you’ll be happy to know both the Cobra and the GrooveLock employ anti-pinch grip design. Perhaps most impressively, these pliers lock on to pipes or nuts like they’re never going to let go. Amazingly they apply this pit bull style grip with very minimal hand force, and they unlock with just a feather-like lift up on the upper handle. A few of the features might be best explained with this video we shot with Todd Shumate of Knipex at the 2010 STAFDA trade show:

Not to be outdone by Todd, I felt we needed to up the ante on the whole “stand on the pliers” test. A few things to note before you read on: 1) No children were harmed during these tests. 2) In case any OSHA inspectors read this, my sandals are steel toed, so back off. 3) I do all my own stunts. 4) The dot on my daughter’s forehead is a glittery smiley sticker. That’s normal, right? 5) Don’t try this at home, I’m a highly trained professional. Ummm, actually, just don’t try it at home, OK? 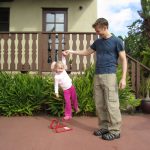 First, we conducted the rarely used “exploit my daughter’s cuteness test.” I rarely stoop to this level of journalism. In fact the last time was many months ago when she helped pile up the dead in our Organic Snail Killer test. Here, I helped balance her immense weight on the Knipex Cobra. Despite the massive force exerted, the Cobra held tight as if a tiny 3 1/2 year old girl was standing on them. The Irwin GrooveLock survived this grueling torture test as well. 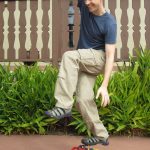 Next, the Karate Kid “Crane” balance test. It turns out balancing on one foot on a pair of 10″ pliers is harder than it looks. However, thanks to my highly trained martial arts prowess, I was able to not only stand on the Irwin pliers Karate Kid style, but I also directed my Qi downward, effectively multiplying the force of my body 10,000 times. Impressively, both the Irwin and the Knipex pliers withstood this brutish force. 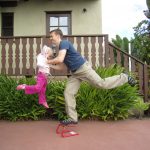 And, finally, the “Cute daughter exploitation meets Karate Kid” test. I thought doing the Karate Kid test was hard, but it’s even harder when you’re holding a wiggly little girl. Her cuteness overpowered my Qi, so we just relied on our combined weight for this one. Both the Cobra and the GrooveLock held firm.

The standard Knipex Cobra has a smaller and more narrow handle, but you can upgrade to a Comfort Grip for just a few bucks more. 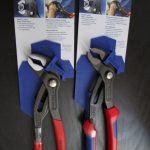 The Comfort Grip makes the grip almost identical to the GrooveLocks. Since we wanted the pliers to be as similar as possible, our comparison focuses on the Knipex Cobra with Comfort Grip. The standard grip on the Knipex was a little thin for our liking. I’d recommend the thicker grip option if you wind up ordering the Cobra.

The Irwin GrooveLock comes in a multitude of sizes and styles, 6″ with a 1-1/8″ jaw capacity on up to a beefy 20″ with a whopping 6″ jaw capacity. Styles include straight jaw, V-jaw and smooth jaw. The Knipex Cobra line also come in a myriad of sizes and styles, maxing out at about 22″ in length and 4-1/2″ jaw capacity. The Cobra comes in options such as chrome plated, extra-slim (with a beak-like head that can access the most hard to reach workpieces), a “Cobramatic” which we suspect is similar to the GrooveLock’s standard ratcheting feature, and the previously mentioned thin and beefier handle coatings. The Groovelock features 16 different jaw positions, while the Cobra offers 25, giving the Cobra a strong edge for finessing the ideal jaw opening.

As we mentioned in the options above, the GrooveLocks have a feature of ratcheting the jaw opening smaller (without having to push the button). The standard Cobras are set until you push the button again. Although many will see the ratcheting action as a plus, I actually prefer the fixed locking of the Cobras. One of my biggest issues with Channellock pliers has always been that the size setting you place the wrench in can easily get inadvertently switched when moving the pliers around. I like the reassurance that once I set the opening with the Knipex Cobras, it’s not going to slip or change unless I press the button.

Some subtle design differences distinguish the Knipex Cobra from the Irwin GrooveLocks. The first thing you might notice is that the push button on the Irwin is about twice the diameter of the Knipex button.

Both are easy to depress, although the Knipex button sticks up a bit higher and has to be pressed a bit further down. Other than aesthetics, we don’t see much of a difference between the two buttons.

One thing that is very noticeable is that the GrooveLocks feature thicker metal in the gripping area. In fact, the tip is almost two times as wide as the Cobra’s. This provides more gripping area, but both of these tools grip so fiercely we’re not sure that’s really an advantage. We did like the fact that the head of the Knipex Cobras is more compact in all dimensions, giving it a definite advantage over the GrooveLocks in tight clearance applications.

The actual overall design of the pliers also vary. The Knipex pliers use a “box-joint design”, which basically means one of the plier handles nestles in between two equal thickness sides of the other handle. As a result, the pivot point of the locking mechanism is the only area that isn’t part of the solid handle. On the Irwin pliers, the two solid handles appear to be clamped in place by a metal bracket that’s riveted to one of the handles. Because of the thicker metal and nestled setup, the Knipex appears to be a stronger design. We couldn’t verify this since we didn’t manage to break either of them.

Jason the Plumber On-The-Job Feedback:
Jason agreed both wrenches are designed very well. He thought he would prefer the Knipex as he already owns a smaller version. Instead, he found himself using the Irwin GrooveLocks even more than his trusty ChannelLocks (which is saying something). In fact, he’s used the Irwin GrooveLocks everyday for the last few weeks. His only complaint was that for some jobs, the 10″ version he was testing just wasn’t big enough. Why did he use the Irwin more than the Knipex? The grip on the Cobra he was testing was the standard Knipex grip which is quite a bit thinner than the standard GrooveLock grips. Had the grips been the same, it would have been a toss-up. As a die-hard Channellock user, we think Jason’s preference for the self locking, push button design is pretty compelling testimony for the advantages of this style of pliers.

I don’t think you can go wrong with either of these pliers. In fact, the only way I think you can go wrong is by not having at least one of these in your tool arsenal . . . they are fantastic tools. Being made in Germany, the Knipex, not surprisingly, is a bit spendier than the Irwin versions. Thanks in part to my German bias, I favor the Knipex Cobra mainly for it’s more precise adjustability, more compact head design, and the button that locks in both directions. However, if you do opt for the Knipex, I highly recommend the beefier comfort handle, and I’m not quite sure why they don’t use that handle profile for all the Cobra pliers.

via Amazon starting at about $25. You can also find a great selection of the Irwin GrooveLock Pliers

starting at about $12. Impressively, just about every single review on Amazon is 5 Stars for both the Knipex Cobras and the Irwin GrooveLocks!