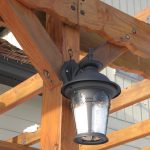 When we moved into our house a few years ago, the backyard left something to be desired. There was little more than a rickety platform (posing as a deck at 3×5′) with a couple steps leading to a dirt-dry “yard”. But we made do. Lacking the luxury of a beautiful deck; a card table and lawn chairs were set up so we could “entertain”. Luckily, our friends have some… not so great expectations. Step aside Martha Stewart, there’s a new decorator in town. The last straw was when I leaned “a bit too heavily” against the deck railing and landed in a “pile” (of dog crap) three feet down. Six acres and the dog can’t mosey out a little further?

We needed a deck; a true hang out spot. And, why not go nuts with a pergola too? Being low on cash, we had to get creative. The previous fall, we had refurbished the horse barn, ripped out the stalls and saved all the wood. Hey, it was good wood (after planing each run; it was great wood), you never know when you might need it. And…there it was: the flooring for the deck, right at hand. All we needed to purchase was some pressure treated wood and the necessary hardware.

The first step was to remove the old, rotted deck and stairs. No exaggeration; it took 45 seconds. The whole thing pulled apart like smoked pork off the bone. For the new framework we used pressure treated 2x10s at 16″ on center, straddling two saddles which extended between four of the six posts (which we had already planned for and laid out). The structure was butted up to the house, leaving a ¾” gap for water drainage. (NOTE: We did NOT attach the deck to the house because in our neck of the woods, that would require a permit. And let’s face it; we couldn’t afford the possible, resulting delays which might cut into important cocktail time on the new deck.) Permit policies vary, so be sure to check your local codes before embarking on a decking project. 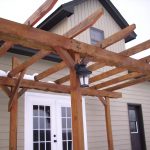 Next, we ran the decking using the wood from the stalls (true, 2″ hemlock, by the way.) Even though we had planed the faces of the wood, we left the rough edges where the horses had kicked and gnawed. It works well with the country setting of our house. We then built two sets of steps off two of the deck’s sides. It was coming together petty nicely; time to start on the pergola.

We planned for the pergola to span across the deck as well as an additional ten feet beyond, to the edge of the existing wraparound porch. (This helped to tie the two, separate areas together.) The post holes were dug (to a symphony of some of the foulest language ever heard; the land our house sits on is composed of nothing but shale and clay) and the posts set in concrete. We walked away while the posts set and dried.

The following weekend, we were ready to build the rest of the pergola. We first ran the beams across the posts (we had already ripped irregular, scalloped edges along the beams in order to “mirror” the rough edges on the decking). Once the posts were connected, by the front and back spanning beams, we ran the perpendicular, 2x6x12s at 2′ on center. (We chose to go with 2′ on center because of lack of material; it ended up working out very well, offering a surprising amount of shade once the sun isn’t directly overhead.) Everything was twice, coated with a tinted (to help blend the colors of the hemlock and pressure treated), weather seal and…the deck was ready to be broken in. NOTE: To save time on the pergola build, we used L-brackets (rather than notching) to fasten the 2x6s to the beams. Three years in and no problems…so far. 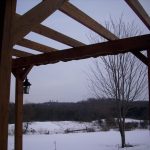 Both aesthetically and structurally, it is a huge improvement over what we had before. We ended up with a 10×10′ deck and 12×20′ pergola. We completed the design with a stone patio, surrounded by sections of stone wall (every stone was stol…um…recycled from a neighbor’s excavation project) and solar lights around the patio’s perimeter. During the four, stinking months per year of “nice” weather we’re graced with; you can bet we spend more time outside on that deck than we do inside.

We completed the deck and pergola over the course of two, low stress (yeah, right) weekends. The cost of the project was minimal because as I already mentioned, we recycled the hemlock from the horse stalls. The pressure treated 2x10s and hardware were relatively inexpensive too. While I wouldn’t put this venture into the easy or beginner category; it’s pretty painless if you have decent carpentry knowledge and the desire to see the job through. Signing off and waiting for summer…cheers!