As part of Irwin’s ongoing effort to elevate tradesmen worldwide, Irwin fittingly created the Ultimate Tradesman Challenge. Through over 250 sanctioned events held throughout the world in 2010, with over 16,000 participants, six world finalists made it to the World Finals in Bristol Tennessee this weekend. The World Final winner was competing for a chance at $1,000,000, and some serious bragging rights. As a non official participant, I have to say the challenge itself is a lot harder than it looks (or at least it is if you want to do it fast). It’s fitting that the World Finals were held at the race track in Bristol TN, known at the “World’s Fastest Half Mile.”

Irwin invited media from all over the country to spend the weekend in Bristol to hear about Irwin’s latest and greatest tools, check out a little NASCAR racing Bristol-style, and see the Ultimate Tradesman Challenge World Finals. As a NASCAR virgin, I hoped to be culturally enlightened on many levels. Aside from the race, a big part of the weekend included the Ultimate Tradesman Challenge World Finals (with elimination rounds on Saturday night and the finals Sunday morning).

Irwin also gave the media a chance to try our hands at an official Ultimate Tradesman Challenge station. Our friend Kevin Boyle of Wood Magazine impressively took home first place among the media, followed closely by Tom Gaige of ProToolReviews.com. I’d like to say I was next runner-up, but apparently all my time spent behind a keyboard have atrophied my high-speed fine motor skills. My times were closer to a minute vs. the mid to upper 20’s times turned by actual (non-media) competitors.

What was most amazing about trying the challenge (aside from comedic value), was the appreciation gained for how hard it truly is. On the surface it seems pretty simple: 1) Grab a pair of GrooveLock pliers and loosen one large bolt and then a smaller threaded pipe 2) Mark your 2×4 with three lines 3) Slide the 2×4 over and clamp it in place 4) Saw off the end of the 2×4 with Irwin’s Universal Handsaw (HomeFixated review coming soon) 5) Drill two holes into the 2×4 and finally, 6) Unclamp the wood and hope that you measured accurately when you attempt to slam the 2×4 down over two metal posts to stop the clock. Simple, right?

After the media folks gave it their best shot(s), we were all left wondering how it was possible for the world finalists to get the times they did. One theory floated – that Irwin doesn’t test for performance enhancing drugs. As far as I know, (I rarely use them in HomeFixated tool reviews), those drugs don’t make you good with tools or well coordinated. Ultimately it comes down to these tradesmen just being kick-ass at what they do. If you don’t believe me, just check out this Irwin video showing the top six strutting their stuff:

I had the pleasure of talking with Delwyn Thornton and his lovely (and very enthusiastic) wife Pam over dinner on Friday. The two of them run Soles & Heels Shoe Repair in Brandon Mississippi. Delwyn had an impressive story of persistence that ultimately led him to his 2010 North American Champion title (and a really sweet Mustang pimped out in a custom Irwin paint job). It was great to meet some of the hard-working, down-to-earth, talented people that suddenly found themselves in a whirlwind of Irwin Ultimate Tradesman fame and excitement.

Aside from Delwyn’s shoe repair biz (where he is also an accomplished DIYer and known as someone who can fix just about anything, skillfully), UTC had an interesting medley of vocations represented in the finalists. There were three carpenters (Stawka Wielka of Poland, Daniel Sheperd of England, Bjørn Ravn Kühlmeier of Denmark), an industrial arts teacher (Matthew Francis of Australia), and the owner of an ice cream machine parts manufacturer (Helmut Radke Neto of Brazil). Bjørn, aside from having the most funky characters in his name, also had the coolest pants and was one of few men that could pull off wearing capris to an event like this. Anyway, it was quite the renaissance crew of finalists. 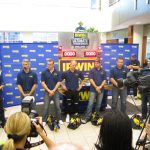 The elimination rounds on Saturday had a number of surprises. The round robin tournament style made for quite a few fun head-to-head battles. There were several DQ’s (as in disqualifications, not Dairy Queens), caused in particular by cuts or drilling that were not quite up to tournament tolerances. There were probably some Dairy Queens nearby too, but we didn’t check into that. 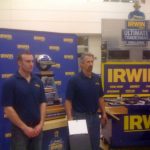 The crowd was pumped, and despite being outnumbered, the Australian fans definitely get the loudest cheering award. At the end of the night, two men were left – Delwyn Thornton (US) and Daniel Sheperd (UK). I was hugely relieved with this outcome, as I had already imagined a riot of half-naked, drunken NASCAR fans without a US contestant to cheer for at the finals, which were to be held at Bristol Speedway the next day. 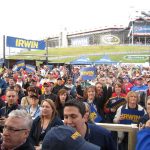 Tension was high at the big event at Bristol Sunday morning. Dan and Delwyn both had their game faces on and were all business before their best out of three battle for the Irwim Ultimate Tradesman World Final. I was at the front of the stage in a spot directly below Dan. It was a great vantage point for the event even though I anticipated being clubbed by a 2×4 cut-off at some point. My up-close view gave me even more appreciation for how fast these guys are. Dan seemed to be able to saw through that 2×4 with the Irwin Universal Handsaw in about three very intense strokes. To the disappointment of much of the US-biased crowd, Dan Shepherd won the final with an insanely fast time of 25.07 seconds. Amazing. 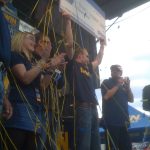 Dan was literally jumped by family, and in particular, his girlfriend. Once the tears of joy subsided (and they were able to pry Dan’s girlfriend off him), it was time to pick one of the Irwin tool bags. Twelve of the bags contained $10,000 and twelve contained $20,000, but one bag contained a cool one million. Dan got a bag with a $10,000 prize, not bad for less than a minute of physical labor. I chatted with Delwyn later that day and he relayed a little story. He said he asked his wife before Dan selected his bag what number she would have suggested he pick. In a cruel twist of fate, Pam told him it would have been her favorite number four, which turned out to be the bag that had the million bucks in it! A painful twist, but Delwyn took it with his trademark grace, low-key poise and a healthy sense of humor.

As far as I’m concerned, all the finalists are absolute winners. These were the fastest six tradesman whittled down from 16,000 contenders. My hat is off to all of them, and a big congrats Dan for taking home the win. So what about us “normal” folks, can we have a shot at a million bucks, even if we’re slow or have spastic fine-motor movements? Thanks to Irwin, you can! All you need to do is enter their Thank A Tradesman Sweepstakes with a grand prize chance to win a million dollars. Remember that plumber that unclogged horrific, unspeakable things from your drain? Or that electrician that fixed your DIY wiring job that made a sizzling sound instead of controlling your lights? Or that framer or finish carpenter who actually built something you don’t need to make excuses for (because there weren’t any mistakes)? Show your appreciation of a tradesman that has helped you in life and you might get a little love back (just don’t go overboard, you don’t want them thinking you’re a stalker).

Our sincere thanks to Irwin and their PR team for hosting a great weekend, and to all the UTC finalists for putting on a great show. I walked away from the festivities with several realizations and one question – 1) If Irwin holds the Ultimate Tradesman Challenge again, I’m too slow to be a contender 2) Traveling with a police escort is awesome! 3) NASCAR fans at a March event wear way more clothes and drink far less moonshine than I anticipated 4) If you need your shoes or other leather goods repaired, Delwyn is your man, and 5) What’s the deal with redneck hot air balloons (we saw some in Bristol)? In California, sending flaming improvised balloons into the air would most likely result in a massive fire, and a felony, so I’m curious about the tradition in Tennessee. Any pyromaniac rednecks (is that redundant?) want to chime in with a comment below?