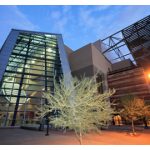 We have officially recovered both physically and mentally (more on that in a later post) from the annual STAFDA trade show (Specialty Tools and Fastener Distributors Association). It was a fantastic couple days loaded with so many great tools my head is still spinning. I spent both days scouring the show floor, scoping out great new tools and products. In addition to all the great tools there was also a lot of socializing and partying. So much so, that I’m dividing my immediate coverage of STAFDA into two articles: today’s article focusing on some of the stand-outs of the show, and part two focusing on the more “social” aspects of the show. Let me warn you now, part two will be steamy, racy, maybe even scandalous, and promises to bring HomeFixated’s journalistic integrity to an all-time low. . . which is saying something. But, for now, let’s dive into some of the intriguing products we saw at the show. 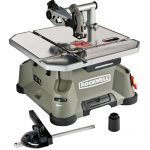 Although we haven’t tested it personally (yet), Rockwell may have another hit on its hands with the BladeRunner. The easiest way to describe this tool is an upside down cabinet mounted jig saw, with an upper blade support / guide. It’s wall mountable, reasonably quiet, can cut a variety of material (wood, metal, plastic or even ceramic) and uses standard t-shank jigsaw blades. Given how often I have to cut random pieces of wood, plastic, etc. this seems like an easy go-to tool for quick cuts. And at $170 from our sponsor Rockler, the Rockwell BladeRunner appears to be a lot of tool for the money. 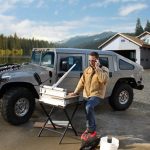 As you can see from Bullet’s homepage pic, you can easily cut flooring or siding at your lakeside manor next to your Hummer without even getting dust on it. Despite being initially terrified by what looks like a cross between a guillotine and a giant paper cutter, we think this tool has some serious benefits: no noise, no dust, no need to cut material outside. They make a few versions with their EZ Sheer being their consumer grade lighter duty model, and their Magnum Shear rounding out the higher end. This tool cuts Hardi siding like it is paper, and their Magnum model even cuts 3/4″ hardwood. In terms of the giant blade, it’s no more scary than a whirring saw blade (or maybe even less so) when you think about it. More coverage to come. 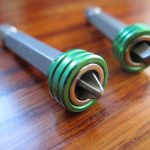 Not every innovation has to occur in full-sized tools. The magnetic bits you see here seem to lock on to screws with an improbable grip. We put some long decking screws in the phillips tip and these bits gripped like a kung-fu fighter. The magnetic bits use a spring loaded collar and what appears to be an insanely strong magnet to keep your fasteners precisely in place. Naturally, they come accented in Hitachi green for proper branding. Very slick. 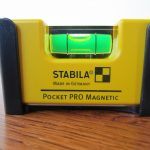 Going with the good things come in small packages theme, Stabila was showing off their Pocket Pro Magnetic levels. Smaller than most measuring tapes, the Pocket Pro comes with an integrated belt clip/holster. It’s .057 degrees accurate, has magnetic edges on two sides, and sports a v-groove for leveling round stock or pipes. As someone OCD enough to level his own electrical boxes during installation, I think these are great. A super compact torpedo level alternative, and sure to find lots of spontaneous usage if you keep one handy. You can find the non-pro version Stabila 11990 Pocket Level

for about $15. The pro version should be out soon for a touch more. 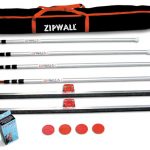 I’ve used Zip Wall for years to help separate our living quarters from the more or less constant barrage of construction dust and debris from various projects. ZipWall Enables you to quickly create your own little haz-mat zone (or dust containment zone) very quickly. ZipWall’s extension poles have a nifty top that enables you to clip the plastic to the head of the pole efficiently. Seconds later, you’ve got your own private oasis/hell depending on what you’re doing when stuck in there. I also recommend their zippers which enable you to turn a plastic wall into a re-sealable door. You really don’t want to be stuck behind a zip wall with no way out. Of course, with all the fun surrounding EPA Lead-Safe laws, ZipWall is selling like hot-cakes. You can find the ZipWall 4PL Plus Kit with Carry Bag, 4-Pack

for about $270 online. More coverage and video coming for ZipWall. 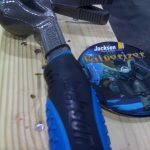 If I had to do demolition on a room, needed to tenderize huge chunks of meat or had to kill zombies, the Jackson Pulverizer might be my new go-to tool. This thing looks ready to destroy just sitting on a table. Some clever design went into these, including a triangular neck that helps you rip through drywall or zombie limbs. We’ll have video coverage of this and another great Jackson zombie killer too. You can find the Jackson Pulverizer Demolition Hammer 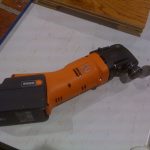 We dropped by Fein’s booth and got our hands on their impressively beefy cordless SuperCut. This isn’t your grandma’s oscillating tool. We fired it up and it felt like it had the power of a small chainsaw (minus the chain, the two-stroke pollution, and that whole limb endangering thing). Fein tells us to look for the real thing around February. This looks like a great tool for the contractor or very serious diy’er / tool hoarder. We hope to have more Fein coverage coming soon on HomeFixated too. 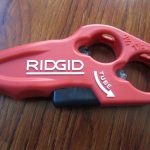 When you’re stuck under a sink, dealing with several lengths of 1-1/4″ or 1-1/2″ pvc, showing your plumber’s butt to everyone, the last thing you really want to do is dig out a hacksaw. This nifty new tool from Ridgid not only eliminates the need for a hacksaw when doing basic plumbing with thin walled plastic, it also results in a very clean cut you don’t need to de-burr. My only gripe; the tool name sucks. I mentioned that to Ridgid (slightly more diplomatically), and they said “well, that’s what it does.” I didn’t mention this, but I have a “Four Wheeled Method of Transportation That Sits Low to The Ground And Drives”, but for some reason Lamborghini still named it “Murciélago.” OK, it’s actually a really old Honda CRV, pretty much the same one Kevin Malone drives in The Office. The point is, you can name your tools with names other than a description of what they do, and sometimes that makes for good marketing. Anyway, if you do any under the sink plumbing, the Ridgid Pipe-Dicer is definitely worth keeping an eye out for. You can pick up for the Ridgid Tailpiece Extension Cutter 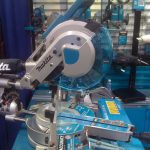 Makita was showing off their well regarded 10″ saw at the show. Like the new Bosch Axial Glide Miter Saw, Makita has taken some clever steps to cut down on space-hogging from the slide mechanism. In Makita’s case, they’ve created four sliding rail components rather than two, making for a much more compact slide assembly area. The LS1016L also has an epic capacity for a 10″ saw, 6-5/8” for crown, the largest crown molding cutting capacity (vertically nested) in its class. Its patented retractable rear guard also delivers 4-3/4” baseboard cutting capacity in the fully vertical position.

Notable Mentions:
Bosch had a strong presence including an updated GLL3-80 Laser, and our previously previewed 12″ Axial Glide Miter Saw.

DeWalt has some innovative products up it’s sleeve, but we’ve been sworn to secrecy, for now. We also dug their 12V drill and driver ergonomics thanks to the bottom mount battery placement.

Milwaukee also had loads of new goodies, many of which we covered in our Milwaukee New Product Symposium content and follow-up articles since then.

Vaughan had a huge display of hammers, including one with a nifty side nail-pull built into the hammer head.  I also chatted with President Charles Vaughan about their impressive family heritage (they’ve been family owned for well over a century).

Strong Suit had some very well-made gloves on-hand. Their founder Scott McDaniel also took the time to teach me a bit about glove tech. Strong Suit clearly pays attention to the details of what makes a good glove.

The Japanese company Tajima and their Marketing Manager Scott McCoy gave me an education on measuring tapes, rasps, and snap-blade knives (I’m already a big fan of their Chalk Snap Lines). More coverage on them pending.

Demo Bags was on-hand to promote their burly debris removal bags (don’t call them trash bags, they put them to shame).

So, turns out Panasonic makes cordless power tools. What impressed us is that their ToughIP line is engineered and tested to withstand dust and water intrusion. They are rated by the International Protection Code of IP56 (this basically means they’ve been tested the tools in some pretty extreme dusty and wet conditions and the tools kept working).

Our sponsor Rockler was represented by the Benchdog booth. More video coverage on one of their popular products coming.

PraziUSA was debuting their StirWhip, which seems to be one of the most creative stirring tools we’ve seen. You can pick up a Prazi USA Stirwhip, 8-Inch

Imperial Blades showed us around their US made oscillating tool blades at about half of Fein’s pricing. More coverage on HF in the future.

We shot a little video of Jim Boyd of UFO / Universal Fastener Outsourcing to demonstrate their Ballistic NailScrews that go in via pneumatic nailer, and come back out with a screw/bit driver.  They estimate 70% time savings over screwing directly.  If I were doing a huge deck, I’d strongly consider them.

Benchmade demoed some impressive quality knives, one of which we’ll be reviewing in our ongoing useful blades/knives coverage.

Lastly, we ran into folks we covered previously on HomeFixated, including our friends at NailJack, Woodman Tools with their SkatePlate, and Senco’s Fusion Nailers.

I’d like to also extend personal thanks to my friends Jay Amstutz of CopTool/Ohio Power Tool fame and Justin Fink, intrepid editor from Fine Homebuilding, for making the event even more fun!  We’ll be covering more Stafda points of interest with in-depth articles and video content in the coming weeks and months. And, don’t forget to stay tuned for the hot, steamy, titillating, and scandalous coverage from everything fun that happened behind Sarah Palin’s back and after the show floor closed down!