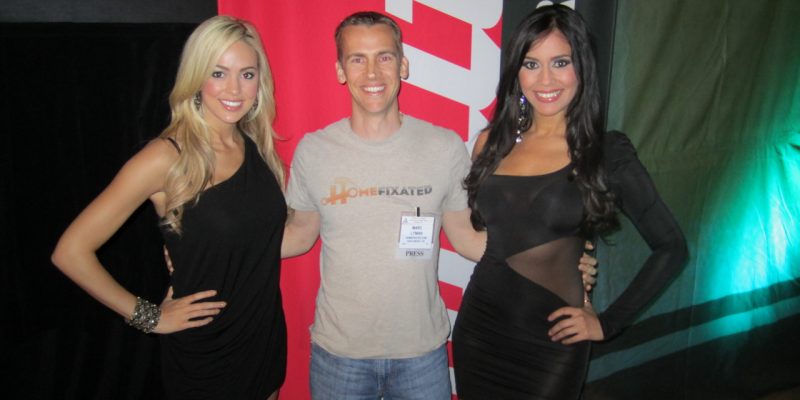 The annual STAFDA show is like a dream come true for tool fanatics. Since this was my first year covering STAFDA, I wasn’t quite sure what to expect with social activities after the show. I had heard about a couple tool company parties, but quickly realized there was a lot of party activity to try and squeeze in. My co-conspirator with STAFDA Gone Wild plans was Jay Amstutz of CopTool/Ohio Power Tool (friend and HF sponsor). 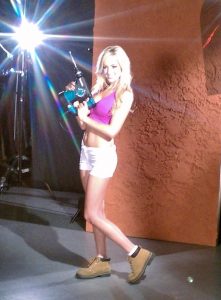 Jay and I took in a media event hosted by Dewalt (look for interesting DeWalt coverage once the veil of secrecy has been lifted). Although Dewalt was hosting a party too (which sounded pretty fantastic by later accounts), Jay & I had to make some tough decisions. . . so many parties, so little time! After the Dewalt media event, we headed over to Makita’s bash, which is where things started to get spicy. Please take note, as this also marks the point where my journalistic ethics will be reaching a new low. 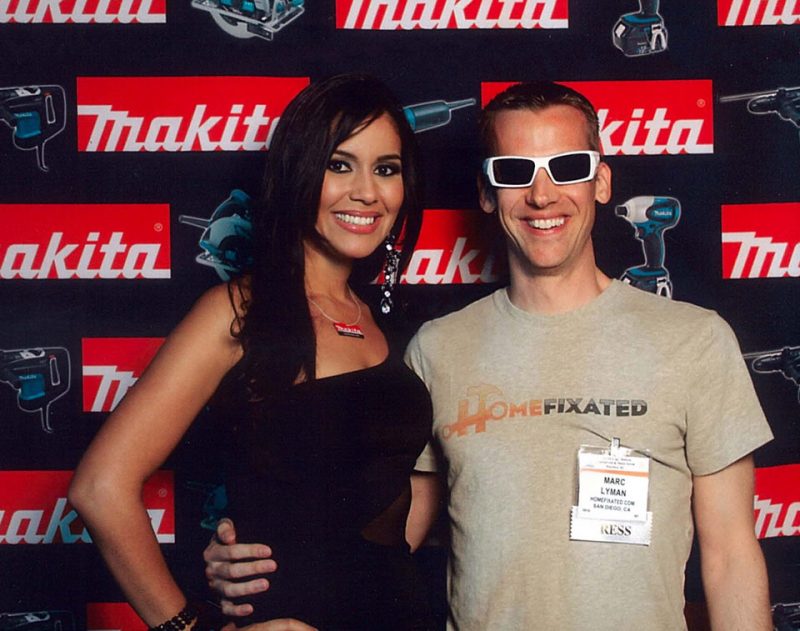 Before heading into Makita’s event, we filled out a couple raffle tickets and made our way into the party. This party was big! They had a mountain of prizes they were giving away in their raffles (I won the sweet white Oakley’s you see above, not that you’re looking at me or the glasses. Thanks Makita and Oakley)! They also had an indoor RC Truck Racing track. Either the participants had already had a lot to drink, or controlling the trucks was a lot harder than it looked. Unfortunately we never found out since we had to remove ourselves from the roster to avoid crimping our ongoing party hopping. By far the best part of the Makita party was that the 2011 Miss Makita (Harmony Moniz) and 2011 Señorita Makita (Celeste Santana) were there. This is where things get steamy.

Jay and I wasted no time making our way over to say hi to Miss and Senorita Makita. We asked if they’d be willing to shoot a couple photos with us, at which point one of them said sweetly, “Do you want both of us?” Wow! The room started spinning. My pulse quickened. Could she have phrased that any more perfectly? I wasted no time with my sincere reply, “Oh YES PLEASE!” Take note of how genuine my smile appears here. This marks the only time in my life where I have been asked “Do you want both of us” in the presence of two gorgeous women. At this point, I pretty much considered my entire STAFDA trip a complete success. 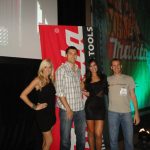 We’ve covered the topic of booth babes after past trade shows. Some of you might think the use of hot women to market products is fairly sexist, and you’d be right. But there’s more to it than that. You see, women are an under-represented group at an event like STAFDA. I’d estimate there were about 20 men to every one woman. Makita no doubt recognized this, and instituted an emergency plan to ensure women are better represented. Sort of an affirmative action plan for really amazing looking models. In addition to my two new favorite models Harmony and Celeste, Makita also had models from Signature Modeling agency roaming the party and facilitating some of the action.

Despite all the fun we were having at Makita’s bash, all good things must come to an end. Jay and I moved on to visit the Bosch party being hosted at the Hard Rock. This definitely required a bit of cultural adjustment. No pin-ups, no roaming models, no radio control toys. Bosch’s event was lively and well attended, but also much lower key than Makita. This was probably a good thing, since I was still dazed from the “Do you want both of us” event, and needed some time to catch my breath. It also gave us some time to have a few leisurely bar-side chats with the friendly Bosch crew and some colleagues. I also had the chance to chat with Joe Sainz, (Bosch’s Joe The Pro). 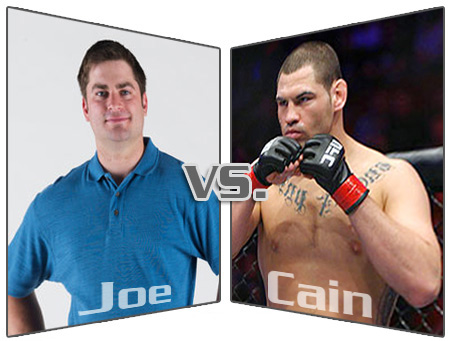 A couple of weeks ago, Sean O’Hara from ToolMonger threw down a challenge between Bosch’s Joe The Pro and Milwaukee Tools new sponsoree, Cain Velasquez (current Heavyweight Mixed Martial Arts UFC Champion of the World). Joe replied to the original Toolmonger article, and offered $100 of his own cash if Cain chimes in on the Toolmonger post. Jay and I were headed off to the Milwaukee party next, and I offered to scout out the competition a bit for Joe (more on that shortly). We tore ourselves away from the Bosch event and started the short trek over to Milwaukee, which thankfully was being hosted at the same hotel I was staying at (that came in handy later that morning).

Time for another culture shift, only this shift started as soon as we stepped out of the Hard Rock. We could already see the Milwaukee party, and it was about 3 large city blocks away. Milwaukee not only had searchlights, but they had moving “bat signal” lights (with the Milwaukee logo rather than a bat silhouette).  Milwaukee is a company that truly understands branding. They also truly understand how to throw a party. 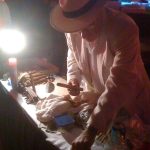 Jay and I strolled into a sea of red. A live band was playing, there was a bar bigger than my house, a 12′ long Sawzall Blade framed a garage-door-sized TV, a Cuban guy was rolling cigars, people were playing darts and Foosball.  We happened to stroll in just as Milwaukee prez Steven Richman AND a tray of Tequila Shots all mystically converged at the same space and time.  I complimented Steven on his party hosting (which he graciously credited entirely to the Milwaukee team), the shots went down, and we were off to see Cain Velasquez taking photos next to the stage.

I detected a slight nervousness from Joe The Pro about his chances against Cain Velasquez. Looking out for Joe’s safety, I thought one subtle way to test Cain’s strength was to challenge him to a standing arm-wrestling match. As you can see from the photo, and despite about a 100 pound weight difference, the battle turned out to be a draw. This was encouraging news for Joe, until I looked up Cain on Wikipedia. Cain has never last a round in mixed martial arts competition. Not a round. Plus, arm wrestling him felt like grabbing onto a tank. My official advice to Joe (taking nothing away from his manly stature), be really, really nice to Cain if you ever meet him. Also, I got the sense Cain doesn’t read ToolMonger, (or HomeFixated for that matter), which is why I’m hoping to still be alive after this publishes.

Later that night/morning, the DJ started spinning Sir Mix-A-Lot’s “Baby Got Back.” To everyone’s surprise, one of the under-represented woman party-goers hopped up on the stage and treated everyone to a very special, seemingly impromptu dance. The dance was so good, Milwaukee awarded some of their raffle gift certificates to her at the end of the song. Apparently we weren’t the only ones that found the Tequila.

A bit before 1:00 am, I was starting to feel the effects of consuming about ten times as much alcohol as I might on a typical Friday or Saturday. Plus, I thought it might be good if I could still formulate questions and carry on conversations with all the tool and PR people at STAFDA the next morning. I told Jay I’d bail him out of jail if needed, and headed up to my room. Jay stayed until shortly before the party wound down around 3:30am. With the words “Do you want both of us” repeating in my head, I drifted off to sleep with a smile. Thanks to Dewalt, Makita, Bosch and Milwaukee for not only making great tools, but knowing how to play hard too. You can also find more STAFDA coverage via CopTool.

Oh, and Miss Makita and Señorita Makita, your offer was fabulous! Call me, I should be single again shortly after my wife reads this article.