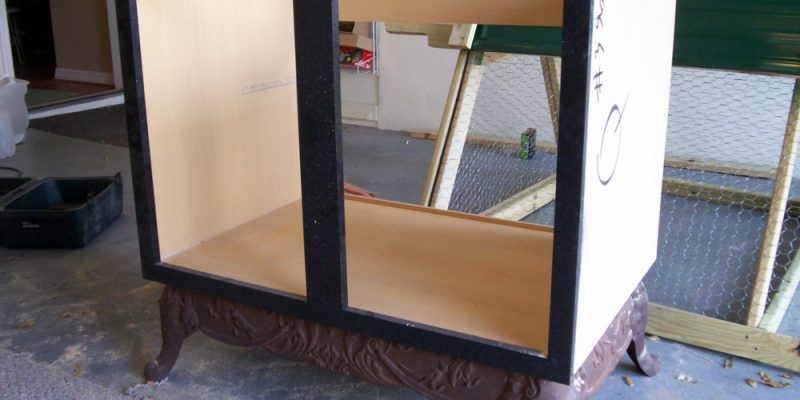 Out with the old and in with the…old? That’s what happens when you buy old junk at the flea market and garage sales. You move out the old junk just so you can bring back some new old junk. But when my garage gets filled up with too much stuff, then it’s time to get rid of a few things. I like to put all my old and new junk together in funky new ways. While most of the time my new creations end up looking like a throwback from a Dr. Seuss book, every once in a while I hit on something that’s worth all of the work. So when I got an old cast iron Franklin stove base at a garage sale, I thought it would pair perfectly with a brand new vanity I had in the garage that was collecting dust. What follows is part one of a three part series on how to build a vanity with character. Frankenstein, prepare to meet your match!

How to Build a Vanity – My Frankenstein Approach

My last project didn’t go too well. I had some leftover chair seats; minus a few of the legs, so I couldn’t create two sets. I decided to cut off the fronts of the chairs and stick them together to make one Frankenstein chair. Voila! Now you have the Ch-Eric. No one dares to sit on it in fear of collapse — not to mention every one of my friends says it looks like a “Sex Ch-Eric”. It now resides on my porch under a pile of other failed Frankenstein furniture projects. I had loftier plans for this bathroom vanity project.

For some reason, the rusty old base of this Franklin stove caught my eye when I was out and about garage sale-ing one day. Out of all the junk I brought home that day, this one was the worst. I wasn’t sure what I was going to do with it, maybe make a really short table. I had no clue. It wasn’t until I realized that it “matched” my new vanity that I had collecting dust in my garage. The perfect base, but how to meld them together to create a functional vanity?

First, I called a few woodworking buddies of mine and had them bring some tools, and of course, beer. After they arrived, we turned the base over on its top and placed the stove base onto the bottom of the vanity. It fit fairly snug, so I decided to attach it right then and there using a few pieces of 1×4 and some 2 ½” hex head screws. I cut the boards so that they fit snug between the metal base, that way they couldn’t pull off of there even if they wanted to. Once I had it screwed from the inside with the hex heads, it was securely attached to the iron base for good.

After we flipped it back over, I pretended to wash my hands in the imaginary sink. The vanity was way too high! The vanity height needed to come down quite a bit, so we did what any respectable beer drinking carpenters would do – we hacked to top of the vanity off. The HomeFixated legal team has strongly suggested now might be a good time to clarify drinking is recommended only AFTER the tool / construction phase of your project. Buzz-killers!

Since there were two false drawers on the top of the vanity, I simply cut them out of the loop by chopping the top with a circular saw. That lowered the vanity enough for a vessel sink to fit. I used my trusty level to create a nice line around the top of the vanity and proceeded to carefully chop off one side at a time. It worked out pretty well so I decided to move on to the next Frankenstein phase of the project.

I bought the bare bones vanity from Lowe’s and it was really the worst $100 bill I ever spent. Particle board and a cheesy interior made me want to throw up. Hence it was collecting dust in my garage. I had a nice big piece of veneer that would eliminate some of the paint and give it a nice wood finish on the sides and inside of the vanity.

There’s a little trick I use to cut veneer – I cut it with a razor knife first. It keeps the veneer from splintering along the edge when you cut it. It also helps a lot if you cut it upside down. In other words, with the face of the veneer facing down. Tear out is the enemy and I try to avoid it whenever I can.

Once I cut the panels, I glued them on with the new glue HomeFixated had recently received from Elmer’s for a test run. I have to admit, I really like this stuff. It’s called Elmer’s Pro Bond Advanced and it’s a grey goop that has a similar consistency as the original white Elmer’s, but it bonds to just about anything. I used it on my chicken coop project and this one. It worked so well I almost used it all up. You can find an 8-Ounce Bottle of Elmer’s ProBond

for around $14 (or less for smaller sizes) on Amazon.

A little sandpaper, paint on the doors and a new countertop is all she lacked now. I decided I’d build a concrete countertop, but we’ll save that for another article. Look for more how to build a vanity craziness in part two, coming to Home Fixated next week!