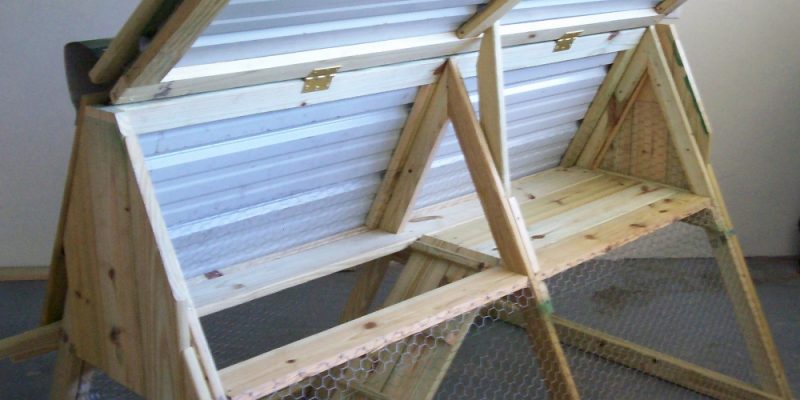 There was a gothic teenager eating with his mother at Denny’s last week. I overheard them ordering and when the waitress got to the boy he responded with “I want to devour the babies”. The waitress looked stunned. The mother leaned over and said “he’ll have some eggs”. That’s when it hit me. I need to build a chicken coop! And now, I need to teach you how to build a chicken coop.

How to Build a Chicken Coop and Johnny Law

I used to have a dozen chickens back years ago when I lived in the country, but today, I live in an area that isn’t the best place for chickens. I couldn’t let them roam and I don’t have a lot of backyard space. I live within city limits so I called up my city officials to verify if live chickens can be kept at a residential area. It turns out you can keep two hens for laying but they have to be cage kept. No Roosters!

Chicken Tip of the Day: Call your local health dept. /building dept. /homeowners association before you build a chicken coop to prevent “empty nest syndrome” when you find out chickens aren’t allowed in your neighborhood after you build the damn thing.

Won’t the Chickens Eat the Termites?

I’m really against putting wood on the ground in Florida. We have some sick termites down here. So when I looked at the chicken coops for sale around my area, I was shocked at how unprotected the bases of the store bought chicken coops were against termites.

It’s often that I use pressure treated yellow pine 5/4 boards for decking. This material proved to be best wood to use for my chicken coop base and is readily available in my area — but it might not be the best choice for your chicken coop design and the area you live in. Other natural materials like redwood, cedar or fir can all work well in many regions if it’s protected before use with a good quality outdoor sealant.

Because yellow pine splits so easily, I had to make a few repairs. I used the new ProBond Advanced glue that Elmer’s recently sent us to repair minor splits in the end grain boards of this project. It’s waterproof, is non-toxic and doesn’t foam up like other wood adhesives often do. Once I removed the clamp, the splits were gone for good.

I also used some metal roof we had laying around. I had a silver metal roof cap that didn’t match the green color so I spray painted it green and attached it to the top of the coop using 1/2-in. grommited metal roofing screws.

Chicken Tip of the Week: Chickens do eat bugs, but they can’t get under the coop to eat the termites. Protect your chicken coop from bugs with the right sealant/paint/materials/fasteners and it will last more than a season or two.

Super-Size Me – Sizing your Chicken Coop

After looking at three billion different chicken coop designs on the internet, I still wasn’t sure if I liked any of them. I kept seeing these designs for two story mega chicken mansions and it just didn’t seem like the chickens should have a better home than me.

Since I wanted to go portable so I could drag the chickens all over my yard, I decided my design couldn’t be bigger than eight feet long and just three or four feet wide/tall or else it would be too heavy to move around. Either way, it’s still heavy and I’m glad I didn’t super-size my chicken coop or I might not have ever got it out of the garage.

I built my coop eight feet long and three feet high. It’s four foot wide at the base and wrapped with a two foot tall piece of chicken wire. I ripped down 5/4 boards for the framing and screwed everything together using treated deck screws.

Chicken Coop Tip of the Month: Kiss your chicken coop. Keep it simple stupid! What are you a chicken farmer or something? The smaller the coop, the smaller the daily upkeep.

My chicken coop was going to not only look good, but it was going to work well too. That’s when I started checking out all of the features that the millions of online chicken coop designs sported. I was on the prowl for chicken bling. Chicken latches, doors, hinges, feeders, ladders and bedding boxes all filled my mind for the first few hours of the design process. I surfed the chicken coop part of the internet for hours and I found tons of stuff to dress up my chicken coop.

But in the long run, I found out that all of these things just added weight, took too much money out of my budget and shrunk the overall living space of my feathered friends. So I KISS’ed my chicken coop again and shut the laptop. No chicken bling, sorry chickens.

Chicken Coop Tip of the Year: Reread the chicken coop tip of the month and keep it simple stupid. Why are you decorating for a chicken? Go to a feed store; buy a bit of hay, a metal chicken feeder and a no-tip water container — that’s all you really need besides the chickens. These three materials come in and out of the coop super easy when cleaning and restocking food/water/bedding.

No matter how you design your chicken coop, it needs to serve two functions:

That means that little door on the end you’ve designed for access isn’t going to work. It needs to open up pretty wide so you can gain access to the whole cage. I wish I would have added another access on the side of my coop and I may decide to add a door later on down the road.

Chicken Coop Tip of the Decade: Who let the chickens out? Not you because you didn’t build enough doors on the thing. Easy access makes for a good design and you’ll thank yourself in the long run when you’re not crouching on your hands and knees through a door that’s too small for a hobbit.

If you’re looking to get more into the intricacies of how to build a chicken coop, BackYardChickens.com has some great additional rescources.

Have you ever built a chicken coop? Did our project inspire you? Tell us all about it and leave your chicken coop comments below!