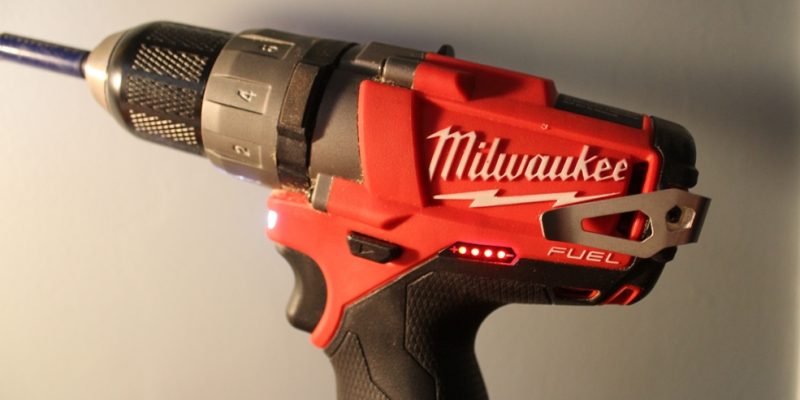 At last, my quest to have a brushless drill in every color of the rainbow has been fulfilled! Well, in every color of a traffic light, anyway, thanks to the recent arrival at the HomeFixated World Headquarters MegaComplex of Milwaukee’s Stop-Light Red M12 FUEL ½” Brushless Drill/Driver. For a look at the other colors on the light, check out GREEN and YELLOW! 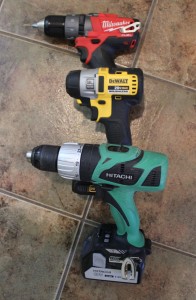 The drill comes in a sporty red (naturally) embossed case, with a big, round swivel handle and steel latches. Along with the drill, there is an attached belt hook, an M12 REDLITHIUM 2.0Ah Compact Battery Pack, an M12 REDLITHIUM 4.0Ah Extended Capacity (XC) Battery Pack, and a quick charger. There are also two manuals: one for the drill, one for the charger, both chock-full of the usual copious !!WARNINGS!! (DON’T STAND IN A BATHTUB FULL OF RAZOR BLADES AND GASOLINE AND PLUG THIS INTO A FAULTY OUTLET DURING A THUNDERSTORM WHILE SMOKING!). They also contain some actual advice on how to operate the drill! Everything fits snugly in the case—no pesky rattling around.

And here’s a little promo video—this actually features one of their 18V drivers, but it uses the same brushless technology. Spoiler alert—if you’re a Makita fan, you might want to skip this!

Leading the Charge of the 12V Brushless Brigade

Milwaukee has just raised the bar—WAY up—with the M12 Fuel brushless drill. They’re the first of the major brands to offer a brushless 12V drill, and the inclusion of an all-metal, ratcheting, locking ½” chuck makes it all the sweeter. Brushless technology, which eliminates the wearable parts (that would be the brushes) from the motor, allows the drill to run cooler and quieter, with increased speed, torque and durability (Milwaukee claims their POWERSTATE brushless motor provides up to ten times longer motor life). Brushless motors are becoming more common on 18V tools, but the technology is more expensive, and up ‘til now tool makers have hesitated to expand it to the less-powerful 12V offerings. At $179, the M12 Fuel IS more expensive than many other 12V drills, but its performance exceeds that of several 18V compact models.

This improved performance is due in part to Milwaukee’s new, more powerful batteries. Milwaukee seems pretty intent on reminding you that their color is RED. The newest batteries are the REDLITHIUM™  series, which work in concert with REDLINK PLUS™ Electronic Intelligence and the POWERSTATE™ Brushless Motor (I guess they nixed REDPOWERSTATE, thinking that could have negative connotations for those who remember the Cold War…). But REDLITHIUM? Isn’t that what powered the Starship Enterprise? Anyhow, the new higher-capacity 2Ah and 4Ah batteries provide significantly increased run time over the previous generation—up to 4X more run-time, 20% more power and 2X more recharges than standard Lithium-Ion batteries. They’re also designed to function in extreme conditions, even in situations where the temperature is below 0ºF. (Unfortunately, that may mean that YOU have to function in temperatures below 0ºF!). Here’s an action-packed description of the new REDLITHIUM batteries:

The brain that ties the whole system together is the REDLINK PLUS™ Electronic Intelligence hardware and software. According to Milwaukee, the REDLINK system ensures optimized performance and overload protection using total system communication between tool, battery and charger. Managed by Milwaukee’s exclusive REDLINK Intelligence, the battery features overload protection to prevent you from damaging your cordless power tools in heavy-duty situations, while the discharge protection prevents cell damage. Its temperature management system and individual cell monitoring help maximize battery life. Zowie!

When the set arrived, the gauge on the batteries showed they were about half charged. I topped them off, which took less than 30 minutes for the pair, and I’ve been using them both, switching back and forth, for the past three weeks without yet needing a recharge. The handle of the drill is a bit thicker than that of most of my other drills, but still fits comfortably in my hand.

I’m installing a ¾” tongue and groove oak floor, and had to face-nail the first course, and hand nail the tongues every 6-8” for the first four courses before I could get my floor nailer into play. I used the drill with the 2Ah battery to pre-drill all the holes, and to drill several ¾” holes through some studs; at the end of the day, the battery still showed ½ charged.

I popped out the compact battery and installed the 4Ah XC battery, chucked up an Irwin Speedbor MAX 7/8” bit and attacked a pressure-treated 4X4” post. With the speed selector set on 2, the drill quit after boring in about 1 ½”. It didn’t strain and buzz and start smoking; the REDLINK brain just decided “Nope—not in my job description,” went into self-protection mode, and shut the drill off. After resetting the speed to 1, I bored a dozen holes with no problem. This is the normal tradeoff, as the higher speed requires sacrificing some of the drill’s torque. With a smaller bit (3/16”) it tore right through even on speed level 2.

I then drove several 3” construction screws into the 4X4. The M12 Fuel buried the screws faster than a politician breaks an election promise, and felt like it could keep on doing it all day. The drill has an adjustable clutch, with 18 settings. When you hit the preset torque, the clutch slips; this prevents you from driving the screw too deeply, or from damaging the screw or the tool. I quickly found the setting that buried the head perfectly flush.

A common feature on many new drills seems to be the LED light on the front. This might come in handy once in a while, but I’d trade it in a heartbeat for some on-board driver bit storage, which for some reason is rarely included anymore. The light doesn’t do a very good job of illuminating the work surface, anyhow; because of its location on the front of the drill, the spot where the drill or driver bit meets the work surface is usually in a dark, scary shadow.

The fuel gauge, built into the body of the drill itself, is a great feature, giving you a heads-up to grab a fresh battery or throw it on the charger BEFORE you climb the 40’ ladder or go slithering into the crawl space. The ratcheting all-metal chuck is very sturdy, and allows you to easily snug the chuck around your drill or driver bit with one hand. That’s another feature we’d like to see on ALL new drills. The included belt hook allows you to temporarily hang it off your, uh, belt (hence the name Belt Hook, perhaps?), which is a great alternative to trying to balance it on the top rung of a ladder for a minute while you wrestle a piece of trim or your surveillance camera into position. It comes installed on the left side of the drill, but can be switched over to the right side or removed entirely, if you’re not into dangling red fashion accessories.

This Red is a GO!

After using the M12 Fuel ½” brushless drill for about three weeks, I really like it. It’s a quality tool, obviously designed for long life and rugged use, and it feels solid, comfortable and reliable. So am I gonna get rid of the green and yellow members of my brushless traffic signal? Hell no! I’ll never give up my impact driver, and the added torque and power of the Hitachi are necessary for a lot of jobs. But will I use the M12 Fuel a lot? You bet! It has way more power than any other 12V drill I’ve ever used, and at least as much power as most other 18V drills I’ve used. I love the chuck and the fuel gauge, and the batteries kick butt! And at 3 lbs. 7 oz. with the XC battery, it’s a pound and a quarter lighter than the Hitachi. Not that I’m lazy or anything, but…well, maybe I AM lazy! Anyhow, I think I’m gonna need a bigger toolbox. 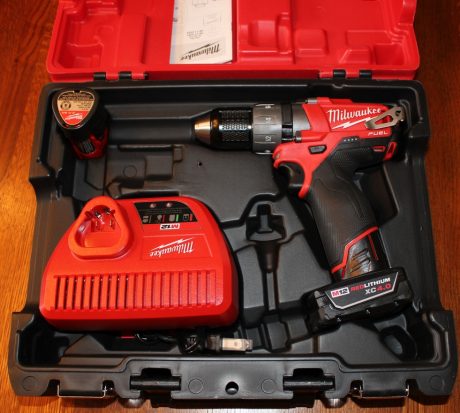