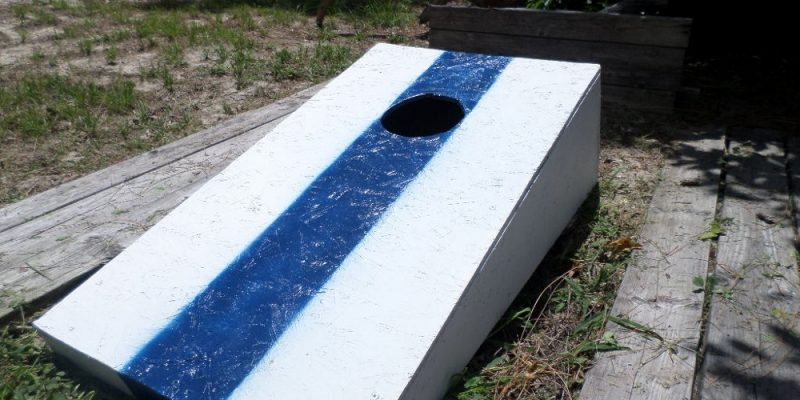 Since the dawn of mankind, we have found ways to pass the times with games. I’m sure one of the first games ever invented involved tossing a rock into a hole, and nearly every game invented since those caveman days pretty much involves getting some sort of rounded object into a net, basket or goal. Times never change; just the names of the games as modern day cave dwellers are still amused by pitting their rock-in-hole-throwing skills against their peers, all while taunting them viciously and consuming copious amounts of food and spirits. Grab your sack; it’s time to play Cornhole (and learn how to build the cornhole board)!

I’ve avoided this game for years, simply because I like a good game of horseshoes myself. But I recently was invited to a barbecue and their neighbor brought over a portable cornhole game. It was basically two boxes that tiltled at an angle, and bean bags. Not my idea of a real manly sport, but I was ridiculed into playing it. Rather than face the shame of my peers I picked up the funny little corn-filled bags and began to play. I found out that it was indeed a tough game, I was worse than I thought and my new nickname was “out of the count” because I always had a “dirty sack”. I knew right away that this was going to be a game I could really enjoy once I got the hang of it, even if only for the official game lingo.

With all of the funny phrases (which I’ve listed at the end of this article), it reminded me of holding your tongue and saying “apple” in school, with the exception that we were a bunch of grown men running around giggling when we said things like “you just t-bagged me with your sack” and “your sack is blocking the hole” while within-earshot mothers began to hold their hands over the ears of their open mouthed children. The moms looked on disapprovingly, however, once the kids got in on the game and started to repeat the almost crude sayings (mommy, my sack is in the hole!), it was all over and everyone had a great laugh.

How to Build your Own Cornhole Board

Building your own court starts with building the two cornhole platforms. I always have a bunch of old OSB scraps laying around so I used that for my boards. I simply followed the official American Cornhole Association rules for building a platform (yes there really is such an organization) and built my own. You could easily buy your own cornhole platform, but the typical pair costs around $100-200. I don’t like cornhole more than I like $200, so I came up with this simple plan to build a cornhole platform from 1/2-inch plywood.

To begin, I cut a 48×24-inch rectangle from the old OSB pieces I had sitting in the backyard. Next, I cut some old pressure treated dunnage that I was going to use for stakes and used them as deadwood to hold the board together. In all, I cut two 47-inch pieces for the sides and two more at 20-inches to fit on the smaller half of the triangle. I screwed them in to the bottom of the rectangle 1/2-inch in on each side with some old 1-1/2 –inch wood screws I had stashed away for a rainy day. The 1/2-inch reveal is needed for the next piece of plywood to fit in neatly.

Next, I cut two more rectangles of plywood for the front and back of the cornhole platform. The front at 2 x 24-inches and the back at 11-1/2 x 24-inches. I attached these two pieces to the front and back of the platform and I also attached two more pieces of deadwood to each side of the back panel. These were cut at 10-inches each and served to hold the side panels in place once the platform was tipped over.

Last but not least, the two side panels were cut. These two cuts were made from two right triangles. The long side (the top) was cut at 47-inches, while the short angle (the back) was cut at 11-1/2 inches. Once these were attached, I could flip the board over and cut the hole.

According to ACA regulations, the top of the hole should be 9-inches down from the top and centered at 12-inches. The hole needs to be 6-inches in diameter and I easily made a nice round mark with a screw in the center and a piece of string. Too bad I was in a hurry to finish before the afternoon rain; I used the reciprocating saw to make the hole and I definitely should have used a jigsaw for a cleaner cut. Now I have a wonky cornhole.

After a light(?) sanding to knock down the rough edges, I took to painting my cornhole platform a nice and bright white. I put a little blue racing stripe down the center to offset the color and help the sack slide into the hole.

As far as bean bags go, you need eight in total. I decided to buy my cornhole bags from Amazon for about $20 (see link below) instead of making them, but I’m sure someone with sewing talent could make their own corn-filled sacks themselves. Unfortunately, the bags haven’t arrived yet so I haven’t tested out my new cornhole boards just yet. In the meantime, I’m going to practice a few sayings like:

Learn everything you need to know about how to play, setting up a court and scoring right here at the official American Cornhole Association website. You can also grab some downloadable plans (different from my design), via this previous HomeFixated cornhole plans article. Happy cornhole-ing!