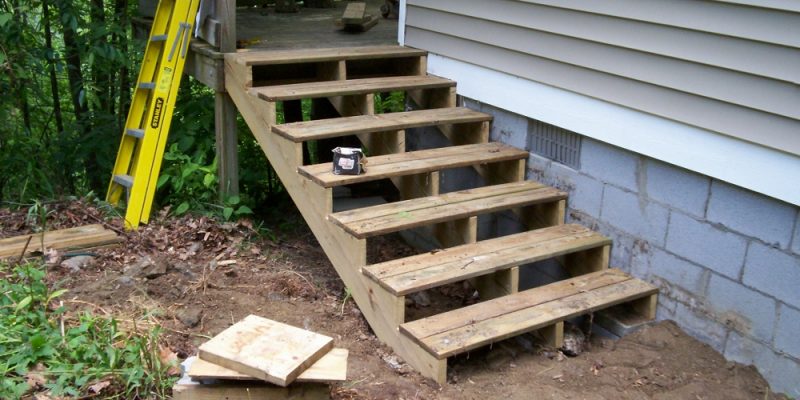 There’s not much of a demand for stairs in Florida. I guess the ground is too flat and the people are too old to make a big fuss about stairs. But occasionally I do get the pleasure of creating a staircase for my clients (or myself). This year, it was for my parent’s cabin in North Carolina. With not much time on our hands for work (or money for materials) we scrounged up what little wood we had and made a basic set of stairs for the porch in a little more than five minutes. Read on to learn more on how to build stairs in just a few simple steps. Get it, steps?! 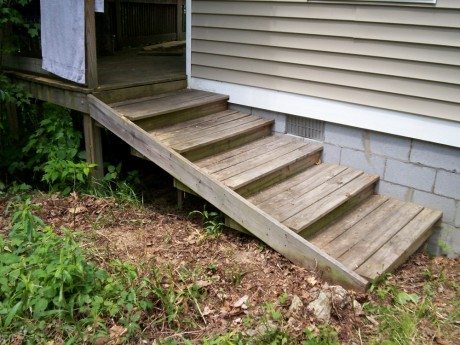 The old stairs were a bit cumbersome. Years earlier, my mom had the notion that they would be too old to use a regular set of stairs, so they decided to build some elongated ones that you could use with a walker. What ended up happening was that it made walking up the stairs really weird so you had to take two steps with one leg, then one step with the other to get up the stairs. You kind of looked like a zombie trying to navigate an escalator.

So we ripped the old stairs out of the way and tried to level out the rocky, uneven mountain ground around the stair landing. I ended up sticking a few concrete blocks against the foundation and backfilling it with a couple of rocks just to make up some solid ground. 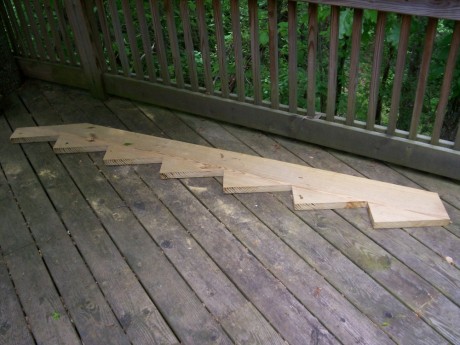 We needed three stringers for the stairs but we only set one 2×12 out for a layout at first. To find the length of the stringers, just measure the height from the top of the landing to the bottom, take said measurement and divide by seven (the typical rise per step) to get the number of steps you need. For instance, a 50 inch rise would be divided by seven to get an answer of 7.14. Round down and you get seven, the number of steps you’ll be cutting out of the stringer.

In our case, because the ground was so uneven, we put a long 2×12 on top of the landing and extended it out to the guesstimated landing zone, then took our measurement from the bottom of the board.

You can take it one step further and divide the number of steps by the rise of the landing and get the actual length of each step. For instance, take the 50 inch rise of our imaginary stair landing and divide it by the number of steps—7 to get an answer of 7.14 again. This time, you won’t need to round up or down, just convert the decimal to a standard fraction. 7.14 = 7 9/64 inches but we can call that 9/64 a quarter of an inch since our stairs are so short. Therefore our steps rise are going to be 7 ¼” each.

Since the optimal step is no less than 10 inches, we can multiply the steps by 10 to get an answer of 70 inches—and find the length of each stringer. 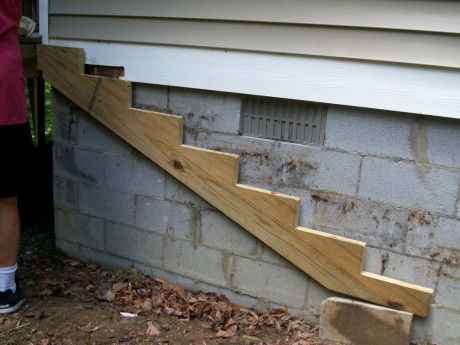 Layout the first stringer with your square so that one outside edge of the square reads your rise and the other side reads the run measurements you calculated in the first step. Stair gauges really help hold the square in place, but if you’re in a hurry, just mark the square with a pencil for your stair guide.

Mark the stringer on each side of the square (the run and the rise), then move the square down to the opposite side of the first mark and make another two marks. Work your way down the 2×12 until you’ve got the right number of steps. (In our case it was seven).

Last but not least, make a notch on the top of the stringer where it will sit on a ledger board. You really don’t need to so this, but I find without it, the staircase is only held in place by a few nails or screws and that makes for a dangerous set of stairs indeed.

Cut out the stringers with a circular saw and finish the corners with a hand saw or jigsaw. This way, you won’t cut into the 2×12 anymore than you need to and weaken the structural stability of the stairs. Copy and paste is all you need to do once you’ve cut out the first stringer. Just lay the cut out stringer on top of the other 2×12 and start scribing away. 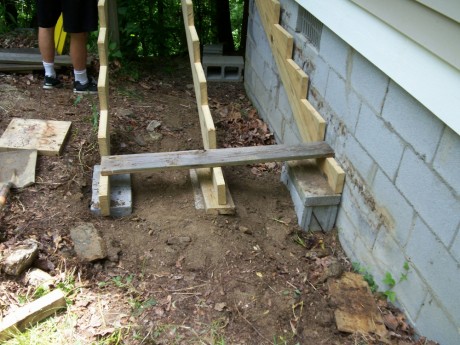 All that’s left for our simple staircase was to install the stringers and put the treads in place. We placed the first stringer against the wall and made the rest line up with the first. We installed the stringers onto the ledger board and made sure they were level across the treads. Finally we attached the treads to the stringer. We used two treads per step—except at the top we needed a small piece so the deck met the first step without a gap. After a few nails, they were all ready to go and it didn’t take us but a steps to get the job done!

Are you a stair building pro? Or, have you tackled a DIY stair project yourself? If so, share any tips you might have in the comments below!