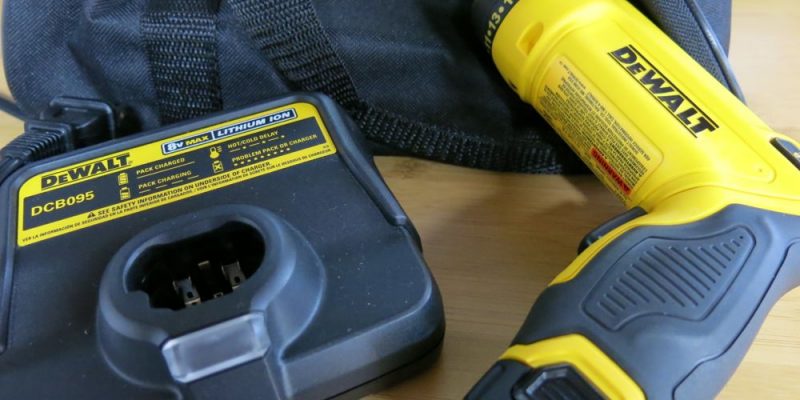 A while back we reviewed the Black and Decker Gyro cordless screwdriver. It was the first cordless driver we were aware of to utilize gyroscopic sensors to control the rotation of the bit. It was also clearly aimed at the DIY crowd, which made us wonder if a tool would be coming along more oriented for pro and hardcore DIY users. We wondered no more when we heard about the new DeWalt Gyroscopic Screwdriver that hit the market recently. DeWalt sent one our way and we’ve been tinkering around with it for a couple months now. Read on for our impressions and in-depth video review in which I display some sweet ninja moves as seen in the video thumbnail below. 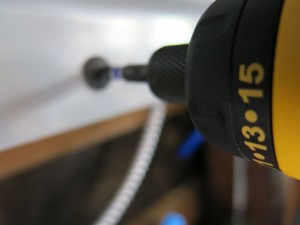 Like the Gyro, the DeWalt Gyroscopic Screwdriver functions pretty intuitively. There’s a long button in place of the trigger that you’d typically find on a cordless driver, and that button activates the gyroscopic function (it has a lock to keep the tool from activating in your tool bag or belt). Then it’s simply lefty loosey, righty tighty. We liked the variable speed which can be precisely controlled by how much you rotate your wrist. What we weren’t crazy about is having to depress the button and turn our wrist. While not a massive amount of additional labor, it’s taking the single step of pulling a trigger and making it a two step process. More on that in the video below. The tool is surprisingly powerful, yet very easy to finesse thanks to the finely tuned variable speed control and 15 clutch settings.

The DeWalt Gyroscopic Screwdriver really shines when it comes to ergonomics. One big standout feature is the ability to quickly change from pistol grip to inline orientation. While I generally prefer the pistol grip setup, there are plenty of times when there just isn’t room for the tool in pistol grip form. A simple press of a lock button (on either side of the tool) with a quick turn of the wrist and the tool effortlessly transitions to a sleek inline orientation. When in pistol grip mode, I really liked the groove down the side of the tool. No matter how you have the tool set up, its solid, compact feel makes you reluctant to put it down.

The DeWalt Gyroscopic Screwdriver sports a 1/4″ hex chuck that offers easy one-handed loading and unloading. This mechanism is so user-friendly we’re not sure why all 1/4″ hex tools don’t have it. The driver also has two LED lights around the bit area which do a very respectable job of illuminating the dark crevasses you might repel into with the tool. A top-mounted tool gauge also helps insure you don’t wind up running low on any of that 8v Max juice. The fuel gauge is welcome, but we were a bit disappointed to see the graphic around it (and the “Gyroscopic Technology” label) start to peel up in one of their corners.

One unusual option DeWalt included with this driver is an optional on-board bit storage clip. The clip attaches to the top rear of the tool and provides convenient access to two additional bits (assuming you already have one in the chamber). We’d like to see more tool companies follow DeWalt’s approach – users that want onboard bit storage can have it, and those that don’t can simply ignore the clip. We think the onboard bit storage clip is a great addition.

Should You Buy It? 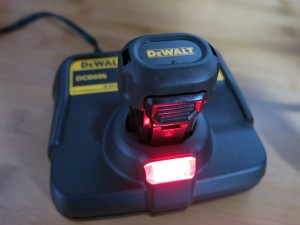 Like most tools. . . it depends. If you do a lot of switching directions (eg. removing and installing switch plates, door hardware, etc), then never having to worry about a directional switch is awesome. And, the precision control is great. However, if you tend to do a lot of screwing in awkward positions (snicker), the wrist contortions demanded by the gyroscopic mechanism can get old quickly. Its price point comes in well below the Milwaukee M4 Cordless Screwdriver which does not use gyroscopic tech. Between the two, the DeWalt has more juice and a much better in-hand feel than the Milwaukee, partly due to the somewhat awkward trigger setup on the Milwaukee. The DeWalt Gyroscopic Screwdriver is the kind of tool that you probably won’t know you’ll truly like until you’ve had a chance to use it on a few different tasks. If you happen to have an early adopter tool-loving friend, see if you can give the tool a test drive before taking the plunge. Regardless of how sold you are on the gyroscopic technology, this is a FUN tool to use.

Where to Buy the DeWalt Gyroscopic Screwdriver

for about $99 on Amazon. A one battery version is also available for slightly less. Both kits come standard with a three-year limited warranty, one-year free service contract, and 90-day money-back guarantee.