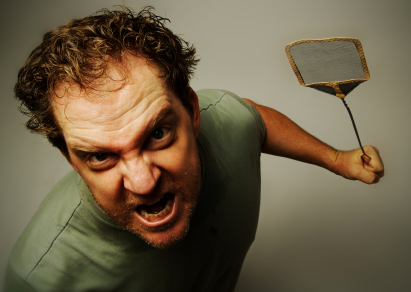 According to Wikipedia, “A gnat is any of many species of tiny flying insects in the Dipterid suborder Nematocera, especially those in the families Mycetophilidae, Anisopodidae and Sciaridae.” Uh huh. All I know is that they are damn annoying! Earlier this year, we decided to plant several tropical houseplants that like standing water in their leaves. Fast forward to a couple weeks ago when our house was suddenly taken over by what seemed like countless, highly aggressive gnats, often inaccurately referred to as fruit flys. They were thriving in the delightful breeding ground we provided for them in our houseplants, although they love hanging out around fruit too. Maybe they’re like mosquitos and are attracted to the CO2 we exhale; they just couldn’t stop flying around our faces. Normally I’m all Buddhist about pest control, as you may have learned from our review of the Fly Goodbye. But when there’s no reasonable way to escort them outside, the gloves were coming off. Plus, two of them attempted to fly up my wife’s nose. Nobody puts baby in a corner, and NOBODY flies up my wife’s nose and gets away with it. This, my annoying little Mycetophili-whatever friends, means WAR!

Household Tips for Killing Gnats
Lurking somewhere in the deep, dark, cob-webby, forlorn reaches of my brain, I seemed to recall a simple remedy for gnat control. That remedy involved putting out a plate of water with a little dish soap in it. Gnats, like Jesus, have the ability to walk on water. Unfortunately for gnats, they lose that super-power when you break the surface tension of the water with a few drops of dish soap. This may also be why the story of Jesus walking on water did not involve any dish soap, but I’m just speculating here. The result, so the theory goes, is a watery grave for these airborne micro annoyances. Step one in my counter-assault against these face-buzzing bastards was the plate of soap-laced water. A couple hours later, almost a dozen gnats lay lifeless in the water. The next day yielded a similar satisfying result. Getting rid of gnats was easier than I thought. If I had stopped there, this might have been the quickest how-to on Home Fixated yet. But what if there was a better way? I had to investigate.

Does Vinegar Get Rid of Gnats?
The water and soap trick was clearly working, but I became fearful there was some better technique I wasn’t aware of. Fast-forward through countless minutes of tireless research online. It seemed the entire Internet was – abuzz – with variations on using vinegar for getting rid of gnats. Vinegar and a touch of soap seemed to be all the rage. Many said apple cider vinegar was the way to go, and quite a few said rice vinegar worked too. I decided to make vinegar and soap one of the tests. While vinegar out-performed just water and soap in a identical glass, it vastly underperformed the large plate of water and soap.

What Size Death Trap to Use


During my in-depth research into this topic, I found all kinds of references to elaborate traps. Some people recommended soda bottles with straws or funnels. Inspired perhaps by other insect traps, it seems people feel there must be some clever way to ensnare these little buggers. Others insisted baby food jars were the best. Some suggested cups. There was even a shot glass recommendation, as if the gnats were heavy drinkers. The options for terminating gnats and fruit flys are vast and varied. I had a contrary hypothesis; the more surface area you have, the more likely a gnat is going to fly into it and get trapped. Remember, these gnats aren’t Jesus. Once they hit that soapy water, they’re going down! Since the whole point is getting the gnat to land in the liquid, I say more surface area is better.

Conclusions
My doctorate-toting wife was quick to point out I didn’t control for variables like container color among other things. Nonetheless, I came to several conclusions on how to get rid of gnats most efficiently. My original hypothesis of surface area being king was solidly backed up by the sheer number of gnats that perished by way of the plate and soapy water. In the two identical glasses it did appear the gnats were more attracted to the soapy vinegar than the soapy water. Given that, one conclusion might be that a plate with soapy vinegar will outperform a plate of soapy water. I didn’t test that, but unless you have large quantities of vinegar and/or don’t mind the smell, I don’t think the difference is worth it. Water is simple, easy and cheap. My advice? Pick a shallow vessel like a plate and fill it with water and a few drops of dish soap mixed in. Place that plate or multiple plates in your problem gnat area(s). Then, sit back like the ruthless, booby-trapping gnat-assassin you are, and start counting the bodies. When you’re done, take a deep breath with the confidence you’re not going to inhale a gnat in the process. Happy gnat hunting!