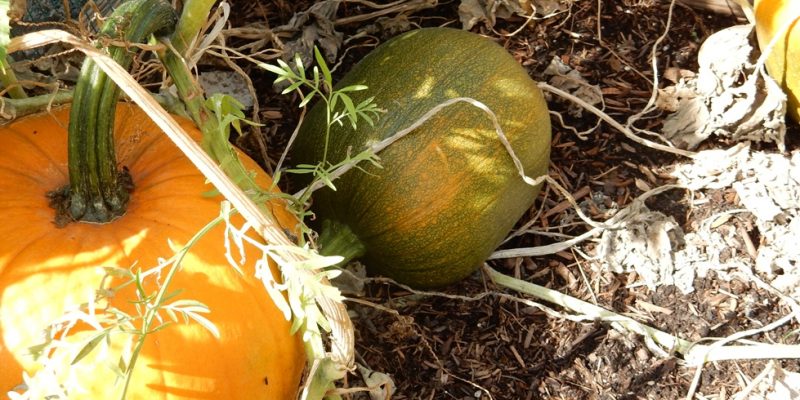 According to the Chinese calendar, this is the Year of the Horse. For me and my house though, we are officially proclaiming it to be the Year of the Pumpkin. We planted nine pumpkin seeds just after Mother’s Day last May, and we’ve had the delight of twirling pumpkin vines, delicious flowers, and now five plump pumpkins growing all over the garden area this year. We’ve not had this much success in years with pumpkins! Typically, we’ll get one or two vines with a pumpkin apiece, but for whatever reason, pumpkins have been the “bumper” crop for our 2014 garden.

How to Grow Pumpkins

Since I’ve never met a pumpkin that I didn’t like, I just took a deep breath when the largest pumpkin snuffed out the bed of spinach, one vine had to be cut down out of a tree, and one pumpkin had to be hoisted up precariously with women’s hosiery to keep its vine from breaking. These pumpkins are worth it. As any true pumpkin advocate would say, I asked not what these rogue pumpkins could do for me but what I could do for them in spite of their tendency to overtake the entire garden.

The success we’ve had this year began with a new location for our pumpkin patch. The new bed allowed the seeds excellent quality soil, and lots of sunshine to wake them up early enough to sprout and leaf out. Pumpkins take a long time to grow and mature, so the earlier you can get them to sprout, the better. Once the young plants started to vine, we made sure they had lots of space for the vines to stretch their legs. Although they did stretch beyond their expected borders, we were happy to just let them be. Pumpkin vines may look tough, and they are very prickly to the touch, but they are actually quite delicate. Handling them is risky, so my method is to leave them alone if I can. Even at the expense of the spinach.

Once the vines began to flower, we had lots of bees swirling around the vines. We just let them do their thing, too. Without the birds and the bees, I would have to help the pollen in the male flowers find the female flowers. Needless to say, I’m thankful for the bees. Once they found each other with the help of those bees, little baby pumpkins started to pop up everywhere.

If you have all of the pumpkins you want for the year already developing, or if you know there isn’t enough growing time left in the season for a pumpkin to reach maturity, you can harvest the pumpkin blossoms. Pumpkin and other squash flowers are a delicacy in many cultures around the world. Pick the blooms in the morning when they are full and fresh. Rinse them off and check for bugs. Discard the bugs, and store the flowers in a container in the fridge until you are ready to use them. They can be eaten alone stuffed with cream or ricotta cheese and deep fried. Or they can be tossed into soups and salads. We ate some of our blossoms in salad. They taste a lot like, well, pumpkin. Try it! I’m not completely out of my gourd. At least not yet.

We pruned back a couple of vines so the energy in the plant could be directed toward the developing fruit. This step helps those baby pumpkins become larger in size more quickly. Some pumpkin growers prune their vines more regularly and thoroughly, and that’s fine. We just like the natural unruliness of pumpkin vines, so we leave them to themselves for the most part. We’re not trying to grow any Mammoths. We’re thrilled with our five little pumpkins.

When pumpkins are big enough, they start to ripen and turn orange on their own. As with most fruit, they ripen best while left on the vine. We had an early freeze, so our vines and leaves were snapped with the cold. The pumpkins needed a little help. We left them on the vine just in case they were still receiving some nourishment through them. We cleared back some of the leaves that were blocking the pumpkins from the sun and warmth they need to continue to ripen. Slowly but surely the orange color is bleeding down through the green.

The longer we can leave our pumpkins on the vine the better. To harvest them, we’ll simply use pruners to snip the vine. We’ll make sure to leave at least three inches of the stem connected to the pumpkin. The stem gives jack o’ lanterns character, but they also protect pumpkins that will be stored and eaten. The hole that’s left behind if a stem breaks off becomes an entryway for disease. So, the three inch stem rule is important whatever the fate of your pumpkin.

When a hard freeze is heading our way, which is any night now, we’ll have to pick our pumpkins – orange or not. Green pumpkins can still turn orange if you allow them exposure to warmth and sunlight through a window or by setting them outside again on warm days. This method just takes a lot longer. And Halloween might not wait for our pumpkins to go all orange, so we may have to carve some greenies this year. It’s OK though. We’re just happy with the serendipity of our pumpkin patch! Happy eating and carving!