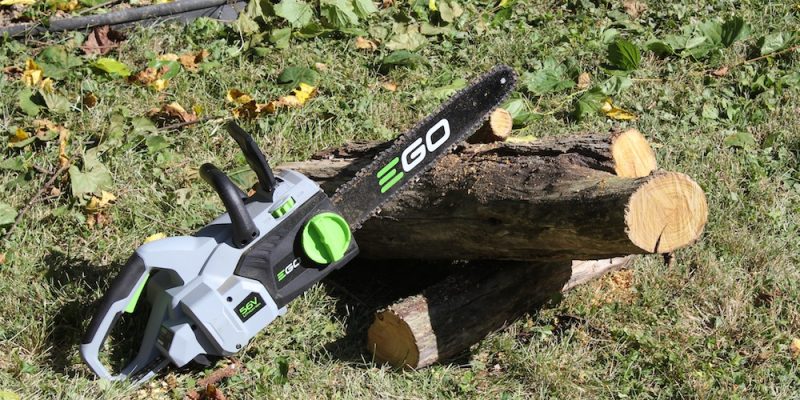 Is your yard starting to look like the Forbidden Forest? Time to get rid of the deadwood (and I’m not necessarily talking about your son-in-law here)? If you have trees on your property, from time to time they’re going to need a trim job. At some point, they’re leafy lifespan will come to an end, and some Paul Bunyan type will have to bring ‘em down. If that Paul Bunyan wannabe is YOU, you should take a look at the new EGO 56V Chainsaw. One arrived at HomeFixated HQ recently for our evaluation; belly up to the (14”) bar and see how it performed!

According to the folks at EGO, the EGO 56V Chainsaw is the most powerful rechargeable product of its kind. The first-ever 56-Volt lithium-ion battery has 40 percent more power than the leading 40-Volt battery. It is removable and fits all EGO tools. The saw delivers the performance of gas without the noise, fuss and fumes. Much like our very favorable experience with the EGO Blower and Mower. Here are the official specs on the chainsaw:

Here’s a promo video from EGO with an overview of their 56V lineup:

Put That EGO To Work

We have a small farm, with a few acres of woods. I’ve only used gas-powered chainsaws in the past, mostly my Husqvarna and my Echo Timber Wolf. I didn’t quite know what to expect from a battery-powered saw; I knew it probably wouldn’t be as powerful as a gas model, but wondered if it would have enough power for anything other than light trimming. My daughter and son-in-law’s yard had some trees that were way overdue for a trim, and a peach tree that needed to come down, so I packed up the EGO 56V Chainsaw and my flannel lumberjack shirt and hit the road. (Unfortunately, it was too warm to wear the flannel, sorry).

I unpacked the EGO 56V chainsaw, and threw the battery on the charger. It’s a whopper of a battery, all those volts need some room, I guess. While the battery was charging, I put the saw together. It’s a pretty straightforward process; all that’s required is to install the bar and chain, and add some oil. By the way, bar and chain oil doesn’t come with the saw, so pick up a bottle when you get the saw.

The bar and chain go on easily, and no tools are required. If you’ve ever installed a chain on a chainsaw before, it’s pretty much the same process. First, unscrew the large knob on the side cover, and remove the cover. Straighten out the chain, hold the bar upright, and drape the chain over it so it sits in the bar’s groove. Make sure the cutting edges of the teeth are facing in the right direction: forward as they sit on top of the bar. There are actually tiny directional arrows engraved into the chain; if your eyes are better than mine (not a high bar), you might even be able to see them!

Although the EGO 56V Chainsaw doesn’t require you to mess around mixing gas and oil to power it, it does need oil to lubricate the bar and chain, just like any other chainsaw. A chain spinning at 6,300 RPM is going to generate a lot of friction, which means heat, so it definitely needs lubrication. Just spin off the cap, pour in some bar and chain oil (slowly, as there is a filter in the tank, to keep out debris), and close it back up. There’s a little translucent window on the side, where you can check the oil level. It’s a good idea to do so every so often, assuming you don’t want to see sparks coming off your chain bar.

Note: the EGO manual says it’s normal for a little oil to seep from the saw while it’s just sitting around. I discovered this for myself, when there was a small puddle (the equivalent of a few drops) under the saw a day after using it. Luckily, the saw was sitting on my daughter’s washing machine, which made it pretty easy to clean up. Had it been on the back seat of my truck, I would likely have used some language unsuitable for the cultured readers we cater to. Lesson? When you’re finished using the saw, make sure it’s stored somewhere that a little oil leakage won’t be a problem, or drain the oil reservoir.

The manual that comes with the saw is pretty well done. There’s a lot of safety information, as you would expect. The EGO 56V chainsaw may be battery operated, but don’t let that make you complacent. This is a serious tool, and when that chain is spinning it can do some serious damage. According to this recent article from Forbes, being a lumberjack is the most dangerous occupation in the U.S. If you’ve never used a chainsaw before, or you use one infrequently, it’s an excellent idea to give the safety info a look. They also provide some good tips and techniques to help you avoid kickback, and to make the most efficient use of the saw.

The first project for the EGO 56V chainsaw was to trim some limbs and wild growth from a tree at the edge of their property. One of the limbs was a few feet long, and nine inches in diameter at its largest point. There were several other branches that needed to come down, many of which were tangled in a huge vine. Good times! I shoved the battery into place, and prepared to do battle.

When I use my gas-fired chainsaws, I always use hearing protection. They’re LOUD, and I’d like to keep what’s left of my hearing. Even though the manual recommends ear protection, I didn’t feel it was necessary. The EGO is very quiet, nothing near the sound of a two-stroke engine. I didn’t miss the two-stroke fumes, either! I started out with the 9” limb. The EGO went through it easily, no bogging down or hesitation. I followed up with the remaining limbs, and a small offshoot that was growing just outside the fence. The saw powered through all of it with no trouble.

Next up was a peach tree that had contracted some kind of fungus. About half the limbs were dead, and although the trunk was all solid wood, there was some kind of fungus on the bark. The trunk at the base was also nine inches in diameter, and the tree was probably 16’ or so tall. I started out by pruning off the limbs I could easily reach, then made a notch cut and felled the tree. Once it was down, I trimmed off all the remaining branches, and bucked it up, cutting anything big enough for firewood into suitable lengths. The remainder of the limbs and brush I cut into 4-6’ lengths, and bundled it all up for the local yard waste recycling truck to pick up.

While we were at it, my daughter asked me to thin out a bunch of saplings that had grown wild on the opposite side of the yard. There were several, ranging in diameter up to 2-3” or so. I cut them out, and we cut up and bundled the remains. After finishing that, we headed back to the first tree, and cut those pieces into firewood or bundle-sized lengths. After that, a little raking, and the job was done!

Does The Ego 56V Chainsaw Live Up To Its Motto?

You gotta hand it to the folks at EGO. First off, to name the company EGO, and then to come up with the slogan “Power Beyond Belief!”. The excessively modest need not apply, I assume…that being said, I was very impressed with the performance of the EGO 56V chainsaw. The Ego got through everything but the final cut on one charge of the 2.0 Ah battery. I threw the battery on the charger, and in just under 30 minutes it was fully charged and ready to finish the job.

The saw is nicely balanced, comfortable to hold and use, and has a LOT more power than I expected it to. This is undoubtedly due in large part to the use of brushless technology for the motor, along with that big honkin’ battery! The saw was very quiet, and it was quick and easy to adjust chain tension. I had no issues with the chain loosening, just normal minor adjustments due to stretching, and the quality of the bar and chain is very good.

Are you going to take this saw to the northern forests and cut down mighty oaks all day? Nope. But if you’re a homeowner with trees and bushes to maintain, the EGO 56V Cordless Chainsaw should be capable of handling any cutting and trimming tasks you’re likely to take on. The folks at EGO back their slogan with a five year limited warranty. The EGO 56V Chainsaw is available from Home Depot with the 2.0 Ah battery and charger for $299; you can also get the bare tool for $199. 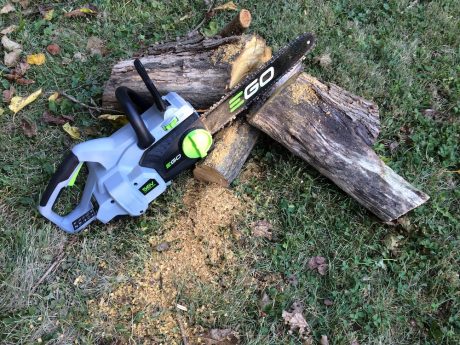