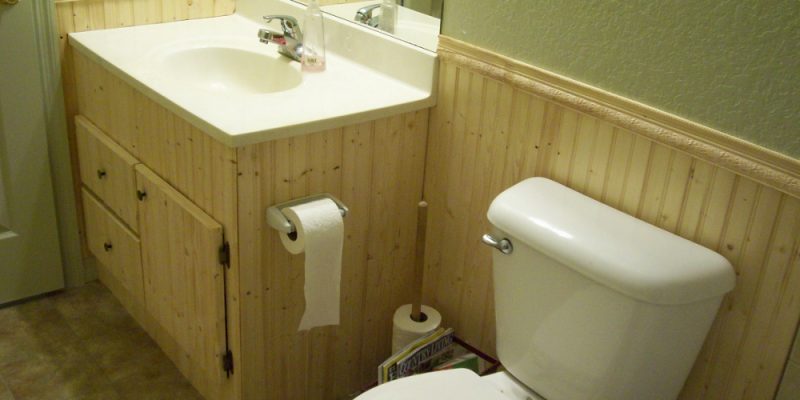 It wasn’t long ago that I had seen someone use beadboard in their bathroom. Soon after that, I decided to steal the idea and use the stuff in my bathroom. This beady-eyed beadboard comes pre-cut, pre-packaged and it’s just pre-etty! With just a little bit of glue, trim and paint, anyone can transform any space into a beadboard bonanza! Read on for a quick how to for installing bathroom beadboard.

Step One – Buy the Beadboard and Do Nothing

This is by far the hardest part of the job. Getting the materials proved to be a battle that almost made me want to abandon this project before it even started. I took a look at some of the ones at my local home improvement center and I didn’t like the cut of their jib so I decided I’d bypass the trip to the store and order some online instead. This is where everything turned into a trip to suck-town.

After the online beadboard arrived a week late, I found out they were the wrong materials – they had no bead, they were just flat rough sawn panels on both sides. So I ended up having to send back the ones from the online store and I went back to the home improvement center to buy their brand of pre-packaged beadboard. They must have gotten rid of the first junk I looked at before and brought in new beadboard, because the stuff I bought from the store wasn’t bad looking at all.

The first step is simple sounding enough. You basically have to bring back the prepackaged stuff to your house and let it sit around for three or so days. This allows the boards to get acclimated to the climate and humidity of the room you’ll be putting them in. According to the directions, it said to pull out the boards from the packaging, spread them around on the floor (of my bathroom) for three days and do nothing. Yeah right.

I wasn’t going to do what the package said since I pretty much use that space for “personal business” a few times a day and it’s really hard to use a small bathroom when you’re trotting barefoot over a pile of boards first thing in the morning. Plus I didn’t think the “climate” in the bathroom would make the wood smell too good, so I spread them out right next the bathroom in the hallway. Close enough, although arguably less humid.

The package also said not to use them in a bathroom, but since I was already ignoring directions, I thought I might as well be consistent. Besides, I wanted to try out some new finishing techniques. I’ll save the details on those for another article.

While we’re on the topic of materials, this thin style beadboard is also available in sheet good format. I opted for individual boards for my particular project, but if you opt for sheet goods, you won’t run the risk of gaps appearing between the short widths of beadboard. You’ll need to decide which style of installation you prefer, and that may in part be based on what materials you have available to you. Cutting sheet goods will likely mean you’ll need a partner to help you with longer cuts on the table saw.

If you’re going to put new base that’s taller than the base you currently have now, then you can skip this step; like I did. But if you’re going to be reusing the same base that’s currently in your bathroom, or you’re going to buy something that’s the same height as the baseboard you have now, then you need pry off the baseboard carefully. Be sure to cut around the base with a razor knife or you’ll end up boogering the paper that’s covers the drywall. Use a nail punch to hammer any nails out of the base to help it come off the wall easier. Set it aside for now and get your butt to painting.

This part was easy since I have a tiny bathroom. I used a regular tapered trim paintbrush to cut in all of the corners first. I followed that up with the roller. But before I started slinging paint, I took off the light switch covers, light fixture and towel bar. I also taped off the mirror and countertop vanity edges so I could get sloppy. After two coats, I let it dry overnight.

I used a tube of Liquid Nail to squirt glue on the backside of the boards with my trusty (and messy) caulking gun. I bought two tubes thinking that would be enough but I ended up running a little short. Since I was covering what I liked to affectionately call the That 70’s Show vanity with beadboard, I had some Elmer’s Wood Glue Max that I used to offset my lack of Liquid Nail. Obviously, if you’re gluing, you’ll want to consider this a permanent installation.

I started at the most visible end first (next to my bathtub tile) and worked my way into the corner behind the door. It was pretty simple, especially since I didn’t need to make a single cut until I got to the other wall. I carefully ripped the board down to the appropriate width on the table saw. And I mean extra carefully. These little boards are so light and thin, they can explode in the blade if they’re not snug up against the fence and table.

I had the benefit of being able to use a scribing tool called the Simple Scribe to work my way through the tough spots where I needed to make the cuts. I notched around everything pretty easily with the use of a coping saw and miter box combo. Since this stuff is so thin, I also used a razor knife to trim some of the pieces where it curved around the base. It all went surprisingly smooth despite the fact that each package did have at least one or two bad pieces I couldn’t use.

The door/drawers edges needed to be covered so I had to cut a bunch of pieces for that using the table saw. I forty-fived each edge with the table saw and hit it with a palm sander to smooth it down. I took the doors off the hinges and used clamps to keep everything in place while the glue dried overnight. I also refaced each of the cabinet and door faces with the same beadboard so that the refaced panels aligned with the cabinet panels to help them blend in.

Last but not least, I topped the beadboard with a chair rail. Well it was really a piece of stamped molding that I turned into a piece of chair rail. I ripped a small notch into the back/bottom of the trim so that it would slip over the beadboard. I know, I cheated, but you got to cover up that beadboard edge somehow!

I should have finished these boards before I glued them to the wall, but if you’ve ever been to Florida this time of year, you’ll know why I saved this step until I was indoors. It rains so hard here in the summer, it makes Seattle look like a desert. Given the humidity in a typical bathroom, some of you may want to pre-finish both sides (and the edges) of the beadboard prior to installation. Doing so is a nice safeguard against the usual enemy: moisture. In my case, a little painters tape, some good finishing tips and a little polyurethane for a job well done!