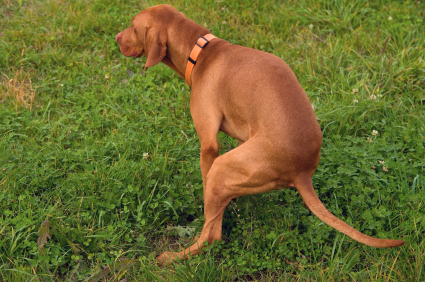 Man’s best friend is only a best friend until he walks over from your neighbor’s house and poops on your lawn. It’s a indignity that faces many homeowners, and an offense that bugs some more than others. Whether or not you’ve actually dealt with errant dog poop showing up on your lawn, you’ll want to read on. We’ll discuss an extreme technique for battling unwanted deposits in your yard, and we’ll share a couple graphic images of alternative deterrents to this excremental problem.

A Tale of Dog Poop

Back when we first moved into our house, I quickly discovered home ownership isn’t as glamorous as it’s made out to be. Even though we don’t have a dog, I awoke to find a fresh turd on our lawn, daily. I dutifully grabbed a grocery bag and disposed of the trash for a week or two (which then treated us to an epic stench every time we opened the trash can). I had a few theories on the culprit, but people walk dogs here all the time. I needed proof. As my cleanup duties for a dog I didn’t own or even see became more “regular”, my resentment began to build. Soon, I was spewing anti-dog diatribes to my wife. It was at the end of one of these heated moments I pronounced, “My days as a pooper-scooper are over. I’m setting up a surveillance camera!”

An undisclosed amount of money and several man-hours later, I had a surveillance camera mounted to the second story of our house, and tied into security software (Security Spy for the Mac) that can be set to trigger recording when motion is detected in a certain part of the video (in this case, our lawn). It was a bold move, and I quickly began imagining my new life that no longer involved scraping chunks of poop from our lawn. Several days later, I was reviewing footage and found the culprit, arched back and all, depositing a fresh turd on our lawn. Gotcha!

My glee soon mellowed as I realized the dog (and another canine accomplice), belonged to our neighbors across the street. It seems discovering the identity of the canine culprit was only half the battle. Hmmm, how do I diplomatically handle this? A subtle “Wanted” poster of course! A few minutes in Photoshop and I had a “Wanted – Serial Pooper” poster printed up, complete with screen shot, criminal history, and the line, “Considered armed and pooperous.” I then dropped off the poster at my neighbor’s house. Luckily, they thought it was hilarious, (or at least they pretended it was hilarious), and they promised to beef up their fencing to prevent any ongoing incursions onto our lawn. Score one for the crazy homeowner!

Now, I know what you’re thinking. “But Marc, I’m not insane like you are. How do I keep dogs from pooping on our lawn without investing substantial resources?” Don’t worry my anti-poop comrade, HomeFixated has you covered. A dirty little secret is that many serial poopings occur under the watchful eye of the dog’s owner. You see, some dog owners don’t see it as their responsibility to pick up poop after their dog. I don’t agree with the lack of responsibility, but I can definitely understand not wanting to pick up poop.

Let’s face it, being a responsible dog owner is humiliating. If you do any walking in your neighborhood, you know what I’m talking about. It’s always an awkward moment when you walk by someone picking up their dog’s poop. Not making eye contact and pretending they’re not scooping up that steaming pile of canine excrement is a common approach. I have to give my respect to those dog owners that do suffer the indignity of being human pooper-scoopers, because owners that don’t pick up after their dogs just suck. That’s right, if your dog poops in your neighbors yard while you stand there watching, and you can’t be bothered to pick it up, you suck. Of course no self-respecting HomeFixated reader would ever fall into that category, I’m just on a rant.

Anyway, if you have sucky dog walkers in your ‘hood that think leaving dog turds on your lawn is OK, the number one technique to battle them is using signs as a deterrent. The signs basically say, “Hey a$$hole, don’t let your dog poop here”, typically without the profanity. Some signs are friendly, hand-written notes. Some, less friendly. Others don’t use words at all. And some don’t bother to mask the hatred that can simmer inside a homeowner (like this sign I spotted in Germany). Translation: “Not Here! or else. . . ”

Some people get very detailed in their signage, often attempting to appeal to the wayward dog-owners long-lost sense of propriety or decency. Others resort to a tradition that any devout Christian might relate to: guilt. Of course, if you opt for signage like the next example, it’s only effective as long as your lawn looks like crap (or pee).

For those of you that prefer the “If you can’t beat ’em, join ’em approach”, you might consider the ancient Japanese art of turd polishing courtesy of Myth Busters (for the record, I don’t recommend this approach): 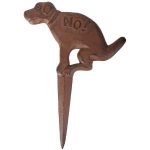 If you’re thinking about buying a dog you might have to clean up after, remember my neighbor’s sage wisdom: “Little dog, little poops. Big dog, big poops.” For your own (less violent than the German version) anti-pooping dog sign, check out the Esschert No Pooping Yard Sign shown here for just $13 on Amazon via the link below. If you have any fun (dog) poop stories, please share them in the comments.