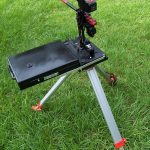 Let’s say you live somewhere with no mailman, meter reader, newspaper delivery person, or anyone else who might make the grievous error of stepping foot onto your property without good reason. Let’s also say that you take security so seriously you’re willing to shoot intruders (with paintballs), no questions asked. We’ll also probably need to add that you have some sociopathic tendencies, tortured small animals when you were a child, and that you might be protecting your meth lab. If all this sounds like you then you are going to love this article! It’s all about how to pepper intruders without having to put down that beer and get off your couch.

Meet the Automated Paintball Sentry. A heartless machine that will pepper moving “targets” with paintballs. Don’t even try to negotiate with it, it doesn’t care. With the ruthless circuitry of a laptop serial killer, the Automated Sentry rains down a horizontal hailstorm of projectiles to anyone unlucky enough to stray into its kill zone.

According to their website, the Automated Sentry software has been in development since mid 2009. Since then, it has seen fairly regular updates. My personal favorite software update is, “Added a firing zone line (per customer request). When targets are above the line they are only aimed at and taunted. If they cross the line trigger functionality is enabled.” Taunting intruders (or your ex-girlfriend who decided to swing by the pad unannounced) sounds pretty sweet. Especially on the model that has a laser scope. Just imagine seeing an unattended machine gun spring to life and aim at you, just as you notice the red laser dot on your chest. I guess if they are silly enough to cross that line, then they have to pay the price (which hopefully isn’t a loss of vision from a paintball hit). No word on how else it actually taunts, but I’m pretty sure it’s not saying “nah-nuh-nah-nah-nuh.”

If you’re ready for almost five minutes of Automated Sentry mayhem, then check out this video. It shows the Automated Sentry taking out pedestrians, runners, bikers, jeep drivers and even a guy bouncing between two trampolines:

You have to hand it to this guy, there seems to be no limit to situations he won’t test the Automated Sentry for. I guess you never know when someone is going to trampoline their way across your property. Trampoline bandits, consider yourself warned!

The creative folks at Automated Sentry also make a mount designed just to automate tracking on a surveillance or video camera (boring!). If only I had this for Anti-Dog Poop On Lawn Cam project! They also have put some work into a more socially acceptable Water Sentry. The Water Sentry could have come in handy on my anti-dog poop crusade too. I see slightly less homeowner liability for nailing people with a stream of water than with firm, high velocity projectiles. To each their own, but none of these devices are likely to ingratiate you with your neighbors and delivery people.

The hardware doesn’t quite look retail ready, but software and various parts of the turret and camera mount options are for sale. DARPA should totally talk to this guy if they haven’t already. I’m sure DARPA would be all over a system that shoots and kills people without any human intervention required. It’s the next level from unmanned aerial drone. Several options are currently sold out (apparently indiscriminately shooting people/things is in high demand). The goods that are available can be found via PaintballSentry.com.