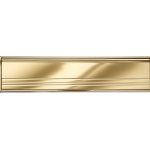 No really, I’m serious. What could be the longest running international joke between the US and those Canucks to the North is an actual bona fide product. It would be like West Virginia creating an outhouse that played dueling banjos while you went, and calling it the “Deliverance Model”. Whether it was poor (or good) commercial sense to name Canadian-produced insulated mail slots Draft Dodgers is up to you, but its design is pretty cool.

These mail slots come in two halves that are adjustable to complement doors 1 9/16 inches to 3 1/8 inches. However, as with most things in life a little engineering can make these mail slots fit any door or wall size.  I recommend T-Rex duct tape, which you learn about in a later post, but the Draft Dodger distributer has their recommendations as well.

What sets the Draft Dodger apart from ordinary mail slots is their insulation and dirt stopping barrier. Both interior and exterior flaps are insulated with seals to keep the cold air out of the house and the hot air in. Not only are these mail slots insulated with seals around the flaps but also with a thick layer of brushes between the two flaps. This added line of defense keeps dirt, air and peeping Tom’s (or in my case Jane’s) out.  It has more defense and filtering agents than the pentagon, or so wikileaks seems to suggest.

The body of the Draft Dodger is made up of heavy duty plastic, and, protected metal flaps help keep rust at bay. Top that off with nylon torsion rods which double as springs for the flaps and you’ve got a sealed insulated mail slot that can handle those fierce Saskatchewan winters and even those not so fierce in Palm Beach Florida.

Draft Dodgers come in two models and two sizes: The Sleeveless Surface Mount and the ELITE Draft Dodger (also known as the ….well I leave that blank to avoid any uproar). Both of these come in regular letter size but the Elite also comes in a magazine size, which is 1 3/8 inches wider. You also get 6 more color choices with the Elite and a larger swing of about 35 degrees on the flap. The Draft Dodgers web site looks like it’s still a work in progress (the photos section has moderately creepy teen and surfing dog photos), but the site does provide the basics on both models and their finishes. The cost is a modest 35 dollars for the Sleeveless and starting out at 47 dollars for the ELITE model. With prices like these we could all afford to dodge the draft.

Buy Now - via US Retailer