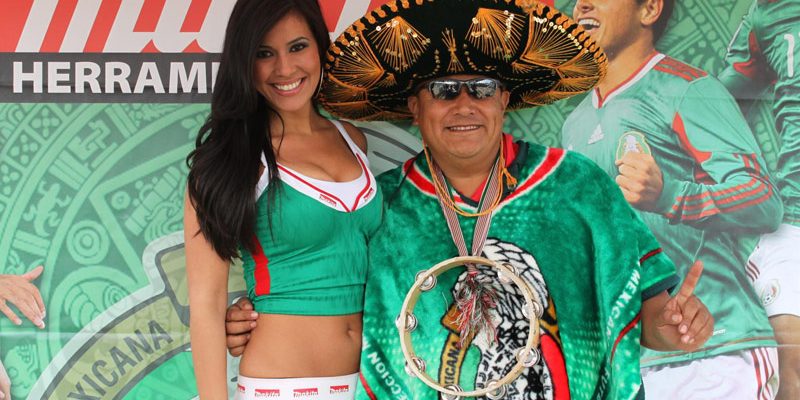 A couple weeks ago Makita invited HomeFixated (and a couple co-conspirators) to check out the Makita Experience being held at the Mexico vs Venezuela soccer match here at Qualcomm Stadium in San Diego (Makita sponsors the Mexican National Soccer team). The event gave us a chance to chat up a few of the Makita crew, experience the insanity of a Mexico vs. Anyone soccer game in San Diego, and, of course, get our picture taken with Señorita Makita. Having experienced first-hand some of the convergence between tool companies and sports sponsorships, the event also got me thinking about tool company marketing strategy. Read on for coverage of the soccer match / Makita Experience as well as some thoughts about tool company sports sponsorships.

Not long before the soccer match, I had been covering the Irwin Tools Ultimate Tradesman Challenge World Finals in Bristol Tennessee. Irwin is a major sponsor of the Bristol track, and they’re not alone in their support of NASCAR in the tool world. Stanley and DeWalt are very active in Nascar as well (DeWalt is back in it in 2011 after a one year absence). At the NASCAR race in Bristol, I couldn’t help but notice how blazingly white the crowd was (partly from ethnicity, partly from minimal clothing for this special event). It definitely was not a diverse crowd. On the flight out of Bristol, a German woman who I was chatting with asked sheepishly “Why weren’t there any black people at the race?” I then struggled with explaining regional and sport-specific demographics in the US . . . in German. The Mexico vs. Venezuela soccer match was slightly different.

As we arrived at the parking lot, I suddenly had the feeling we should have been wearing shirts that said “Random Gringos.” In fact, I’m thinking about having a couple shirts made if we make it back to another Mexican Soccer match. Clearly a different demographic was at play here. To take it all in, we wandered around the pre-game festivities before making our way over to the huge Makita Experience rig.

Highlights included a giant Home Depot Fusbal match, with full size humans strapped to the bars across the game. In order to provide fair and balanced coverage, we also felt the need to have our pictures taken with several models, so our coverage wasn’t too Señorita Makita-centric. It was grueling work, but somehow we managed.

The Makita Experience Rig was like a shrine to all things Makita. From vacuums and blowers to a monster 14″ beam saw, it was wall to wall Makita tools. For some strange reason, much of the activity around the rig was concentrated in a line to see Señorita Makita, and not by the tools.

My amigo Danny spotted this sign and thought it would make for an excellent pick-up line (special wife-of-Danny disclaimer: Danny under no circumstances flirted with anyone, especially not all the models).

NASCAR, Gringosity Level = 9
According to Scarborough Research, 1 out of 5 NASCAR fans is a minority. I found this surprising based both on my visit to Bristol, and based on typical NASCAR stereotypes. NASCAR fans are middle class and just as affluent as the U.S. population (also surprising). Regardless of the 20% stat, NASCAR remains a demographic with a strong majority of white fans. Tool company marketing dollars spent here are not reaching much of the Latino market.

MMA (Mixed Martial Arts) and Boxing, Gringosity Levels = 7 & 4 respectively
According to Sergio Non of USA Today, “Although MMA as a whole hasn’t made deep inroads in the U.S. Latino community, some fighters with Mexican backgrounds do very well among that ethnic group.” He added, “Much of the crowd was Latino at heavyweight Cain Velasquez’s Oct. 23 title win over Brock Lesnar in Anaheim, Calif. Light-heavyweight ex-champion Tito Ortiz has tapped into the Latino market for years.” Non’s comments came after Top Rank boxing promoter, Bob Arum said “I don’t want to demean UFC, because they’ve done a marvelous job of marketing. But it’s the same audience over and over. It’s white males, and they have never been able to expand their demographic. The Hispanics don’t care anything for it. Most African-Americans don’t watch it. . . . So the future success of UFC is limited. The success of boxing is not, because boxing reaches those groups.”

Even if you give the clearly Boxing-biased perspective of Mr. Arum weight, Milwaukee tools sponsorship of Cain Velasquez has to appeal to the Latino market, even if most MMA fans are white. I think it’s a solid marketing strategy in terms of demographics, one that embraces white and Latino interests. DEWALT has a strikingly similar alignment in its partnership with Oscar De La Hoya and Golden Boy Promotions. Both of these MMA and Boxing sponsorships are with Latino stars, and I don’t think that’s coincidence.

I didn’t bother doing any demographic research online to evaluate this one. The HomeFixated crew were just about the only white people at the Mexico vs. Venezuela match. I think it’s safe to say that in sponsoring the Mexican Soccer team, and let’s not forget about Señorita Makita, Makita is very clearly appealing directly to the Latino market (and a couple lecherous white guys from the HomeFixated entourage).

A Quick Lesson In Why Tool Companies Care About the Latino Market:

According To Wikipedia, “As of 2010, Hispanics accounted for 16.3% of the national population.” What is most remarkable is how fast this demographic is growing. “The projected Hispanic population of the United States for July 1, 2050 is 132.8 million people, or 30.2% of the nation’s total projected population on that date.” Several cities in the Southwest have Latino majorities well above 60% of the population. Tennessee’s Latino population is about 5% and California’s is about 38%, which partly explains my conspicuously gringo Nascar experience in Bristol.

Of course, many of these tool companies have other sponsorships that don’t necessarily focus on the Latino market (Makita, for example, sponsors just about everything under the sun, from Supercross, Motocross, Superbike, and ATV, to Brian Deegan, Rockstar Makita LeDuc Racing Team off road racing, and even Scheuring Speed Sports Makita Tools Snocross Team. Oh, and don’t forget Makita’s sponsorship of Finnish Extreme Olympic Curling Team (not really):

Our analysis of sponsorships is by no means comprehensive, as we only covered a handful of tool companies and did not intend to list every sponsorship those companies are involved with. Our focus on the gringo and Latino markets also doesn’t assume that other minorities are not important in the marketplace. What we did find is that astute marketers at many of the major tool brands are not ignoring the latino market.

Needless to say, any tool companies that choose to ignore the importance of the rapidly growing and increasingly influential Latino market, do so at the peril of their own market share. And I’m not just saying that to score points with Señorita Makita. Especially in Southern California (and elsewhere in the US), if your company’s tools aren’t in the hands of Latino tradespeople, they’re not in the hands of most of the people doing the work. Dura mãs tiempo mis amigos!