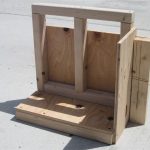 So far I’ve hit on things like fences, decks, destroying your kitchen, and installing TVs on your lawn mowers.  All fairly involved, (and supremely practical) big projects that require a lot of planning and some tools that not all Fixaters may have.  Ah well.  Part of my mission here is to instill the knowledge I have attained over much meditation while strapped to a lift of OSB sheathing while trying to acquire nirvana–and be included into the Wood Ninja Guild.  (Did I just say guild?  Hopefully that is not a tip-off to the video games I play…yikes).

So–starting now and henceforth–for every awesome and highly destructive project I submit, I will also come up with one that is fairly simple, requires minimal tools, and will definitely add flair to your current home. The “pony wall” or half-wall is pretty common.  It is a nice way to divide an open space, and can provide a corner nook or area for a movable appliance cart, or other corner decor.  They are also incredibly easy to build and install.  One of the biggest drawbacks of trying to install a pony wall into an existing space is that there isn’t a really good way to secure the end of the wall to eliminate the wobble.  For your viewing pleasure, I have opted to build a miniature pony wall in my super secret Overground Lair that I am taking a liberal amount of photos of so you know what I am talking about.  This accomplishes a few things:

I get to build something completely unnecessary for anything I have planned.  (Tool use, wood sawing, and screwing.  What is not to like?)

Copious photos somehow make this article seem more polished than others I have written.  (That is my hope.  Hopefully Diabolical Editor Marc has his BS-dar on low when he edits this month).

I built this thing “mini” to give you an idea of the entire scope of the project.  It was put together by extra wood I had lying about the garage–and it is certainly not to any type of scale.

It is just to give you an idea of different ways you can attach the pony wall to give you a lot more stability on the end of the wall.  Most pony walls will be about 4′ in height.  You can adjust to whatever dimension works for you–but keep in mind that you plan on finishing with.  You can go with a nice hardwood cap, or even just drywall and mud it.  (shudder).  Really, the choice is yours and there isn’t a right or wrong way.  Just what will look good for your weekend spruce up project.

You can see my layout on the top and bottom plates.  Pretty standard stuff.   For interior framing 16” on center is the rule.  Generally, 2×4 construction–but since this wall is more for looks than anything–you could rip it down or make it larger if you choose.

For the purposes of this “model” of a pony wall–you’re going to have to bear with me.  The sheet of plywood that the wall is built on will be from now on referred to as the subfloor.  The idea is to imagine that everything is in full size.  So–on our model subfloor, we’ve snapped out the line for the pony wall.  Depending on your floor finish, you may want to do some light demo where the wall will be going.  It wouldn’t be the end of the world to build straight on top of your floor finish, but you might add some stability if you take out some flooring first–don’t worry about being too accurate, you’ll still have the drywall, and baseboard to cover where you cut out.

Ok–so the Pony Wall is built, and up.  I put a piece of plywood behind the wall to simulate the drywall.  I also couldn’t help myself–and stuck my square on there.  Even building a mock up of a pony wall–I had to make sure it was square.  I’m a freak.  You will notice that the bottom plate is cut a stud width short.  The reason for that is because our end stud of our pony wall is going to go into the sub-floor.  Now–before you holler and howl about how I mentioned that this is a quick weekend project, and you are not about to rip up the brand new hardwood you put in–I hear ya.  This is just one option of securing the end of our pony wall to eliminate some wobble.

In homes with basements–you can often get at your floor joists, so in these cases this is a perfect way to secure the end of that pony wall.  “Sistering” (or nailing directly to a floor joist) will be the most secure way.  Run your end stud from the top plate, past the sub-floor and make sure it is long enough to give enough nailing to the width of the floor joist.  Glue and screw this to your floor joist.  (What if your floor joists aren’t inline with your pony wall?  Or run another direction?  Got ya covered:  blocking.  Blocks are your friends).

If the floor joist trick won’t work for you–I have another option.  It will help with the wiggle–but it is not as stout as going into the floor.  It also involves a little more in the way of removing wall coverings and re-doing them.  (So I lied, two weekends.  What are you doing reading this then?  You’re wasting time).

This method involves cutting back your wall covering, and exposing the wall studs.  You can either block, or line up your pony wall so that it is in line with the edge of a stud.  Cutting back your drywall to the next stud over will give you plenty of room to screw the plywood that makes up your pony wall.  (Don’t forget to cut back to only half of that stud so that you still have room to attach your patching piece of drywall).  By using the same principle of sheathing an exterior wall–you are giving your p0ny wall rack strength, and will help with the wiggle.  Avoid ramming the end of your wall with a tank or something.  Don’t forget to add a strip inside the wall at the stud depth for a backer to attach your drywall.  Also–as you will notice in the picture–I cut off my plywood short of the top of the wall for the visual.  You won’t want to do that…

All of this can be accomplished with minimal tools.  Outside of flush cutting a hardwood floor–everything could be done with a circular saw, drill, and the usual measuring/cutting hand tools and without a massive demolition or time commitment.

Despite little to no destruction of personal property…I still think a pony wall can be a nice complement to an open space, and also is a good way to test some of your rudimentary carpentry skills.