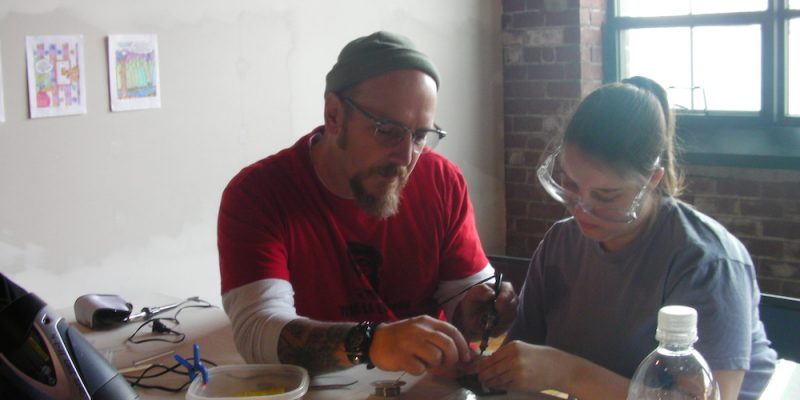 Makerspaces are a hot trend right now among the geek-tastic and the hipsterati. Never hear of a makerspace? Don’t feel bad, most of the world is in the same boat. But when you read more about Makerspaces, you may find that yourself thinking about starting your own. Heck, you may already have one, and you didn’t even know it! You trendsetter, you!

Makerspaces, aka hackspaces, aka fab labs, aka hacklabs are community workshops. Yup. That’s the basic idea. Not a new one, right? I mean, I’ve spent my entire life hanging out in woodshops, garages and machine sheds with my pals, turning wrenches and swapping stories. But these makerspaces aren’t your uncle Bob’s barn. Makerspaces are social environments where the tech-savvy and the traditionalist can get together and share skills, share ideas and most importantly, hang out with other creative people.

Up until recently, makerspaces where pretty exclusively found in large cities, like San Francisco, Seattle, and New York. Noisebridge in San Francisco was one of the first hackspaces in the nation, co-founded by Mitch Altman, the inventor of the hilarious/annoying TV-B-Gone. Noisebridge features an optics lab, machine shop, kitchen, classrooms, electronics lab and common area for work and socializing. What a fantastic idea!

Make magazine was founded as the adhoc periodical of this movement and coined the “Maker” name, but countless websites like Lifehacker and others evangelize about the joys of making, “hacking”, creating, customizing, improving and sharing. “Making.”

I have had the great pleasure of being involved in the organization of some makerspaces, and I’m currently in the beginning stages of helping to launch another. At 52, with 30 years of building and tinkering experience, I am having the time of my life interacting with young geeks who are into CAD, CNC and 3D printing, but may not have any real building (or maybe more accurately “making”) experience. They share their skills with me, I share mine with them. The results are fantastic! I love the idea of going to a place to interact with people who are sewing their own clothes in one room, fermenting their own sauerkraut in another, and building a trebuchet in yet another. Super cool.

Now, I know what you are thinking. “Seattle and San Francisco are full of rich techie hipsters, but I live in Poughkeepsie!” (Nothing against Poughkeepsie…I just watched too many Bugs Bunny cartoons as a kid.) Don’t think a town of 30,000, like Poughkeepsie, can support a makerspace? Au contraire mon frere! Right across the river, in Highland, you will find Squidwrench, the Hudson Valley Hackerspace! They hold weekly events, including soldering workshops, blacksmithing workshops, and “code and movie” nights. If Highland, population 5,647 can have a makerspace, so can your town!

Like many makerspaces, Squidwrench relies on Meetup as a platform for their events, along with their website. Facebook groups, twitter and other social media can help keep members up to date, but the one key to success is GETTING TOGETHER AND MAKING STUFF. The more often you get together, and the more cool projects you launch, the more people will want to be a part of it. In fact, I think that to get started, a makerspace doesn’t even need to have a fixed location. It’s more important to keep DOING stuff, rather than getting bogged down in the organizing of the space.

You can build the nicest shop in the world, but if nothing fun is going on there, who wants to hang out with you? In fact, our first makerspace started in an empty lot. We got together every Saturday and formed a “Temporary Autonomous zone” where we cut apart old bikes that we got free from the police department, and welded up our own crazy creations. This eventually led to an annual “Artbikes” parade, then to the “EpiCenter” workspace in the back of the local ReStore, and finally, to a full-blown maker space in the Cedar Rapids Science Museum.

In his article How to start a Makerspace in Small Town America, Jason Margalus makes a solid point. He writes: “So how did we attack the problems that small suburban spaces face? To combat the awareness problem, we forged local partnerships with our village government, local libraries, schools, other local non-profits, and a relentless outreach program through local television and newspapers. Ongoing scheduled classes with these organizations, as well as press and media calling for all people to join us, and programs with big speakers from in the city drew people in.”

To really make a small town makerspace fly, it needs to be inclusive. None of this “we’re hipsters, and we only allow people n skinny jeans and neck beards in OUR club.” It’s about COMMUNITY, remember? There is a strong trend among public libraries and schools to look at the makerspace model as part of what they refer to as STEM or STEAM programming. STEM is Science, Technology, Engineering and Math and STEAM adds Art and design. If you don’t think you can rustle up enough small town geeks to support a makerspace on your own, throw in with the local school. Kids learn by day, geeks play by night. Everybody is happy!

Recently, in Fairfield, Iowa (pop 9,447) during a snowy holiday weekend, we put out the word that we were going to get together and have our first Maker meetup. I expected ½ dozen people to show up. Instead, we had 27! There was a lot of excitement in the room, and we are already planning our first “repair party.” Wish us luck! If you decide to start your own makerspace and want to spread the word, drop us a line here at HomeFixated in the comments below and let the world know about it!