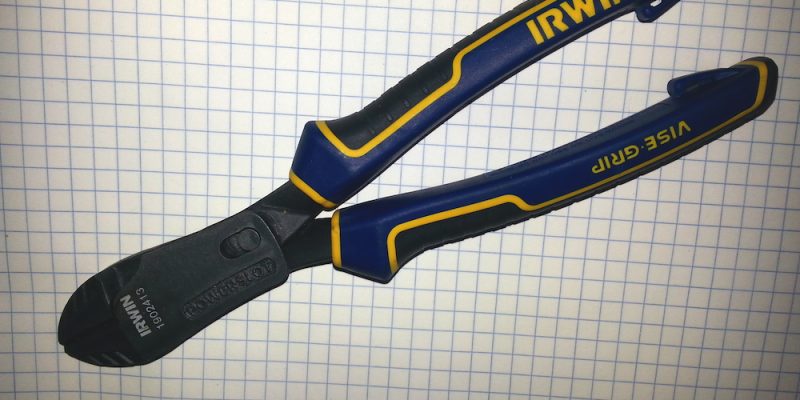 I must be dreaming. These brand-spanking new wire cutters say “Made in Germany” on them. Maybe I need to have my bifocals adjusted. Maybe I wandered into a Garrett Wade showroom by accident? A time warp, perhaps. Or, I’ve stumbled into a wormhole in the time-space continuum. No, Dammit, that’s what is says! Right here on these new Irwin diagonal cutting pliers recently sent to us by Irwin Tools.

Irwin is on a tear with their new tool lines as of late. I recently reviewed some of their impact drilling and driving accessories, which I was quite impressed with. Now I’m looking at their new line of pliers, and they kick butt as well! German made steel, with a handsome, dark anti-rust coating, they look like they are made to last.

The trademark blue and yellow ergonomic coated grips are comfortable, tough, and most importantly, stay in place – unlike the slippery rubber grips on a lot of other tools. The grips make the tool easy on the hands, but the real pain-relieving feature is the “Power-slot” technology that is built into these babies. The cutters are a three piece constriction, unlike a regular 2 piece cutter. Think bolt cutters. This allows you to open the handles wider and get more leverage, since the fulcrum slides as you squeeze.

I put them to the test in the shop, cutting everything I could think of. Framing nails, drywall screws, romex, copper ground wire, even airplane cable. It cut everything! And, no nicks in the cutting surfaces, and the edges were still perfectly aligned – even after some serious abuse. AND, my hand didn’t feel like it needed to be packed in ice after making all of those tough, one-handed cuts.

These pliers are made for Irwin in Germany by NWS, a really great company whose products have previously only been available through professional electrician specialty catalogs. For instance, the “power-slot” diagonal cutters are known as “Fantastico” pliers in Germany. I gotta admit, “Fantastico” has a classy ring to it, but they must have decided “Power-slot” was more descriptive. Personally, I like “Fantastico.” That’s what I say every time I use them, after all. I hold them up like I’m brandishing a sword and declare, “FANTASTICO!” …And then the other guys on the jobsite reply, “SHUT UP about those pliers, already!!”

Irwin is offering a wide assortment of these NWS-made wonder pliers, marketed under the time-honored Vise-Grip brand name. The line includes several nice variations on lineman’s pliers and long-nosed pliers, as well as the nifty gooseneck “Ergomulti” pliers with built-in wire stripper and crimper. Mmmmm. I think I gotta have a pair of those. The whole line looks equally well made and pro-quality. Be advised, these pups aren’t cheap! At a little under $40, they are neither inexpensive, nor cheaply made. But I can’t imagine anyone who uses cutter a lot saying that they aren’t a great investment.