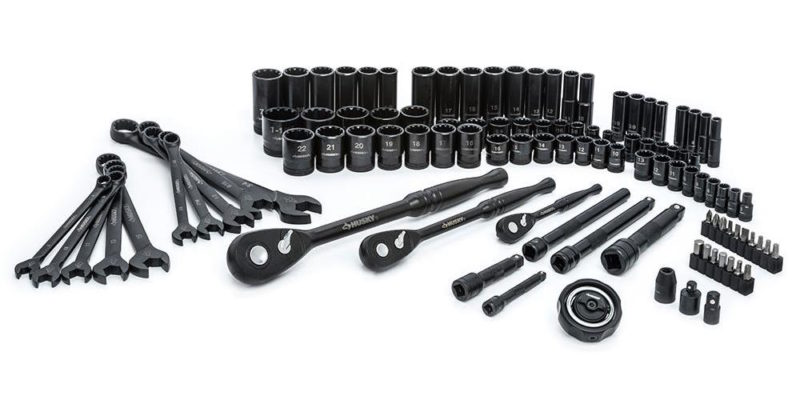 This post is sponsored by The Home Depot. There have been countless attempts at the all-in-one, Do It Yourself tool kit over the years. Husky Universal Mechanics Tool Set has set the bar with its 105 piece set of sockets, drivers, Philips, flat, square and TORX driver bits. This comprehensive set is housed in a well-crafted carrying case that is built to last.

Most plastic carrying cases for small sets of tools or DIY sets of sockets will last one or two seasons before the plastic hinges weaken, turn a telling white and then break off. This ultimately leaves you with two halves of tool set that slide apart, tools fall out and eventually get lost. The Husky Universal Mechanics Tool Set has made a more robust case with a set of metal latches on the top, secondary plastic latches on the sides and hinges constructed with metal hinge pins. Metal hinge pins and latches are no minor detail, these are the details that make the difference between a tool set that remains intact and functional versus broken, scattered and incomplete.

I had an SUV in the past and the window and lock controls stopped working from the driver side door. I took it into the dealership where the manager asked me, with a straight face, “Do you open your door a lot?” I’m not funny enough to make this stuff up – I looked at him and replied “Only when I get in or out of the truck.” He attempted to explain that opening and closing the door would weaken the wiring harness running to the controls and happily quoted the hundreds of dollars to repair this issue. Sounds like the poorly designed plastic hinged cases that hold most tool sets. The case for the Husky Universal Tool Set is designed to last – regardless of how many times you have the need to open and close it.

While the case for this tool set is well made, it should be noted that the sockets do not clip into place. When transported, carried, or thrown (gently or not so gently) into the back of your vehicle, anywhere from 3 to 8 sockets may be found out of place when you open the case. And if you were to inadvertently open the case on its end or upside down – you would find yourself in an instant matching game with your sockets and their rightful home.

The Husky Universal Mechanics Tool Set is Focused on Universal

Having over 100 pieces in the Husky Universal Mechanics Tool Set is a pretty good start with regard to being a tool set for all occasions. But Husky’s design takes it several steps further by featuring:

The low-profile drivers fit into tighter spaces than other driver sets. They also have a rounded and tapered handle that feels great in the hands while using them. The knurled band around the sockets assists in gripping, especially when using them with wet or greasy hands. You can also hold and use the knurled driver extensions similar to a screwdriver handle. The ability for these sockets to work on 6-piont, 12-point, square headed bolts, and more, helps put the Universal in the Husky Universal Mechanics Tool Set. We all know that home DIY projects often include one or three seemingly odd ball bolts that send you to the hardware store for that one special driver or socket to finish the job. The Husky Universal Mechanics Tool Set does its best to eliminate that added run and expense with the design and totality of the set.

The Devil is in the Details

The Husky Universal Mechanics Tool Set pays attention to the seemingly smallest of details to help eliminate issues before they become issues. The design of the open and box head wrenches have a unique corner cut out that assists with working on bolt heads with burs, grease, or dirt that gets in the way of getting the wrench onto the head of the bolt. It would be an easy feature to overlook and you may not be aware that you are NOT filing the edge of a bolt because the wrench fits on without issue. Whether a rusty 80+ year old front end or a greasy 60+ year old engine, the Husky Universal Mechanics Tool Set was up to the challenge.

Chrome and shiny is not the only option with socket and wrench sets. There is nothing wrong with enjoying shiny tools but the lettering and socket sizing is easily read against the beautiful black finish of the Husky Universal Mechanics Tool Set. Details around finish and readability all combine to make this set more user friendly.

A 3/8 inch Gimbal Palm Ratchet can cost anywhere from $20 to $30 for this one tool alone. With the use of the two included adapters, the gimbal ratchet can utilize the driver bits and 3/8 inch sockets. The versatility of the gimbal ratchet with the dozens of sockets, drivers and extension make it a tool utilized often in those awkward, hard to reach spots.

Drivers for All Occasions

The set of driver heads that function with the socket drivers, gimbal palm driver, as well as an HDX 6 in 1 tool is tremendously useful. The range of types and sizes will address the vast majority of DIY projects you will encounter with the Husky Universal Mechanics Tool Set.

Universal but not All Encompassing

The Husky Universal Mechanics Tool Set is well designed and will serve the average DIY-er well, but there are a few omissions worth mentioning. The set of 8 deep well sockets are for a ¼ inch driver and there is no ¼ inch to ½ inch adapter. This limits the amount of push and pull you can leverage on these deep well sockets. The socket range for the ½ inch driver runs from 13/16 inch to 1 1/16 inch and from 16mm to 22mm. And while there are 5 very versatile extensions, there is no breaker bar for rusted and hard to break free bolts.

Buy from the Home Depot for around $169: