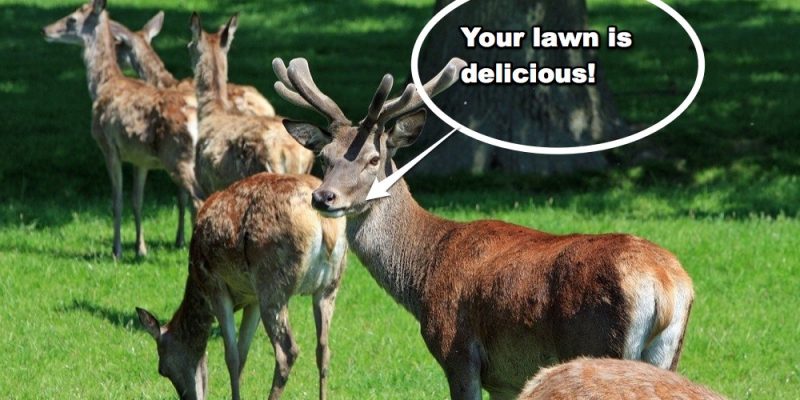 Yesterday the garden was perfectly fine, but today you have returned home to find the tomato plants completely leafless and strange bugs frolicking in the cabbages. It’s a more common occurrence than we would ever admit to our Facebook “friends”. Sometimes our gardens just aren’t as healthy as we would like. Natural disasters such as hailstorms, dry spells, and slugs do occur from time to time.

The trouble often comes in trying to identify the culprit. Of course, we all know the most common arbitrator of garden mayhem and destruction is wildlife. Usually this type of pest leaves a trail a mile wide: one that is marked by excessive damage to foliage, knocked over planters, and fluffy bits of fur in the mangled remains of beloved plants. But there is hope.

Fine mesh netting thrown over fruit bushes helps prevent bird attacks. Yet, there might have been a reason for those four and twenty blackbirds to have been baked into a pie! The same is true for deer and rabbits. My advice is to eat rabbits, deer, and some of the birds that get in the way. If pets are involved, it’s probably a good idea remove their new favorite chew-toy to a different area. However, my dog’s breath could be bottled as a highly potent chemical weapon, so I’m not stopping him from munching on the spearmint plants. To be honest, isn’t your feline the reason you planted the catnip in the first place? But keep in mind that pets also function quite well as a squirrel deterrent.

If the damage isn’t blatantly obvious, smaller garden pests are perhaps hard at work. Slugs are nondiscriminatory eaters that can defoliate a number of flowers in a shockingly short amount of time. The ones in my yard are especially fond of pansies and violas. Their fat, slimy carcasses are typically found lurking under unused garden pots. These pests are nonetheless are easy to combat with crushed up egg shells that were saved from breakfast. Unless the slugs are intent on suicide by gutting themselves, they’ll leave your plants alone.

Another way to combat slugs is to make beer traps, because these creatures are the frat boys of the animal world. They will do anything for cheap beer, even inadvertently drown themselves in order to get it. So you should get a bunch of empty plastic cups and cut them off about two inches from the base. Fill these with old or cheap beer. Or, if you have an already opened can that went flat before you could finish it, use that. Then, bury the beer filled cups in your garden. The slugs will party all night and be dead in the morning.

A less practical but fun way to get rid of slugs is to run around late at night armed with a salt shaker and a flashlight in order to melt the odious boogers. While this is incredibly satisfying, it’s not advisable because a high salt level will adversely affect the growing potential of your garden. Some people have even reportedly battered up the slug armies in their yard, fried, and eaten them. Noshing on garden slugs is probably not a good idea unless you know yours are the edible kind, but is still an interesting way to get rid of them all the same.

Should the totally defoliated plant in question be a tomato bush, keep an eye out for a caterpillar with a spiked behind that goes by the obvious alias of ‘tomato hornworm’. Most garden guides suggest handpicking these hungry menaces off the plants and squishing them or feeding them to the birds. (Might I recommend tossing them in an annoying neighbor’s yard?) Mine go in the garbage bin. Although this is very disheartening at first, the good news is that tomato plants generally recover.

Whiteflies are another minor garden nuisance. If a cloud of white bugs flutter around when you’re investigating a pathetic looking plant, they’re probably the culprit. Regular applications of mild organic spray, such as those made with herbal oils, work well in such cases. If the problem is weird squiggly lines on the leaves of a lot of plants, then the culprit is leaf miners. Leaf miners are equally aggravating but don’t usually kill plants outright. Handpick and destroy the affected leaves to prevent the larvae within them from hatching. A good application of mild organic spray will work in this case as well.

If the plants in your yard were doing perfectly fine but then mysteriously wilt overnight, the problem is probably ants. Although a number of gardening publications have tried their best to convince me that ants will not harm my garden, I find this to be deadly inaccurate. It’s no surprise that I have emptied containers after their plant inhabitants passed away only to find giant ant colonies lurking within. If the ants weren’t bad enough by themselves, they also are such industrious beasts that they often farm aphids! That makes everything ten time worse. Aphids come in all different colors and are one of the biggest garden menaces there is. In both instances, I recommend high powered organic bug spray, such as the kind with Neem or Pyrtherum. Although tansy is said to deter ants, I fail to see the evidence in my own yard.

For trees and tree-like plants in containers, saving the plant from an ant infestation is a lengthy, painful process. After all, ant bites aren’t much fun. You should carefully dig up your plant, and then shake the roots free of all dirt. Next, place the plant in a container full of water in order to soak out all the bugs. Dump out the potting soil far away from the garden. Scrub the container clean with a mixture of soap, water, and hydrogen peroxide. Let this dry for a few hours. Change water the tree is sitting in if necessary. When the container is dry, refill with fresh soil, then plant the tree or shrub. Keep your fingers crossed that the ants don’t return. This method had good results with several rosemary plants of mine, but isn’t advisable for less durable plants like flowers.

Although there are plenty of other garden ailments that can result from care problems or diseases, these are far less common than bug and animal problems. Hopefully, these issues can be easily identified and treated with the aforementioned tips, so that they no longer plague gardeners.