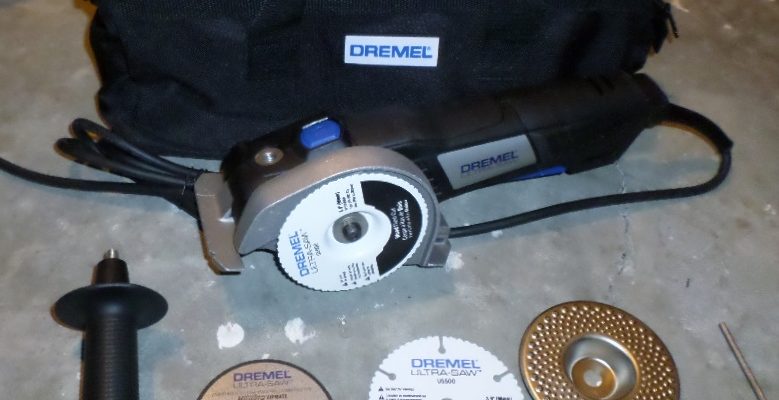 If I told you that you had to cut some thick steel, grind ancient thinset from concrete and undercut a handful of door jambs, you’d probably need a bunch of tools to get the job done, or would you? With the advent of the Dremel Ultra Saw, you won’t need a separate angle grinder, carbide chop saw or undercut saw to make all of these ultra-fun jobs complete.

I’ve worked on some pretty intense flooring jobs. Undercutting hundreds of jambs, scraping off tons of thinset and chopping through piles of plywood for wood flooring projects has been back breaking tedious work – especially when you’ve got to use three or four different tools to finish one job. So when the good folks over at Dremel decided to send the new Dremel Ultra Saw my way for a review, I got ultra-excited.

The Dremel Ultra Saw looks pretty similar to other handheld cutting tools with the exception of the blades. No teeth! What kind of saw blade has rounded teeth covered in carbide? I was sure when I first used it to cut through plywood, it was going to smoke and whine. Don’t tell anyone; but I was wrong! With a powerful 7.5 amp motor, the Dremel Ultra Saw cut through 1/2-inch plywood like a champ. The larger than life metal foot is a stout edition that makes it easier to control when cutting a straight line.

But it’s not just for cutting plywood. Switch out the wood cutting blade with the provided Allen wrench and now you’ve got a metal cutting saw. The metal cutting blade is your everyday average carbide blade and isn’t especially fancy – which is a design approach I tend to favor. Carbide blades always end up wearing out or chipping and instead of replacing these blades with some high dollar metal blade that’s going to do the same thing in a week; I prefer to use the cheaper carbide blades. You can get these blades just about anywhere for a decent price – The Dremel Ultra Saw is also compatible with the Rotozip and Zipmate blades.

This is the part of the tool I like best – the undercut or flush cut saw. When you buy a conventional undercut saw, you’re only going to use it for one thing – undercutting casing and door jambs for flooring. That’s just great for tile and wood flooring companies who use them all of the time, but for someone like me who only does a few floors each year, this saw is worth every penny because I can use it for other things besides undercuts.

What’s neat about this saw is how the blades for undercuts and grinding has a bell shape that pushes the tip of the blade out and away from the guard for flush cutting. Like any grinder it’s capable of taking a finger or two if you’re not careful. Make sure you read the safety instructions and follow them when using this powerful tool. I also noticed that Dremel calls it a flush cut saw, however, it’s not quite flush – it’s got about 1/8-inch of space between the floor and the cut – perfect for a bit of thinset or floating floor pads.

Most of the time, my floor scraper does the trick of getting rid of old thinset and adhesives from concrete. But sometimes, more stubborn pieces elude my scraping techniques and a more powerful tool is needed – the rough and tough angle grinder. Because it’s not a tool that I use too often, it was a kick in the butt when I bought my last one for $200. I’ve used it less for flooring than I have for anything else and most of the time it sits in my shed.

The problem with my grinder is that it does too good of a job. Instead of just taking off the old thinset, it often takes a bit of the old concrete with it. Not a great thing when you want the floor to remain level. The Dremel Ultra Saw can also be used as a surface prep/grinder when you attach the provided blade.

I wasn’t really impressed with the grinding blade when I first took it out of the box. It looked a bit like a glorified cheese grater. But once I used the thing on some old drywall and thinset stuck to a concrete floor, I was impressed. It removed all of the stuck on junk without roughing up the concrete slab below. I’m not sure how many times you can use this blade without it being destroyed seeing as how it has a bunch of glued on carbide on its surface, but I’ll bet after a few good grinds, you’re going to have to pick up a new blade.

Besides the four included wood, metal, grinding and flush cut blades, you also get a handy bicycle-style detachable grip for the front of the saw and a nifty little carrying bag. A dust extraction port on the front of the saw prevents debris from flying all over the place, and an adjustable depth gauge allows users to set the depth of the blade for more precise cuts. I was also very impressed with the switch for the Dremel Ultra Saw – it has a unique lever flip switch so you don’t accidently turn on the saw when you’re moving it around. Why doesn’t every handheld power tool have a switch like this one?

Best of all, this 3-n-1 tool is only $129 and that’s a lot of tool for a little price. Whether you’re a flooring expert or a weekend DIY warrior, it’s a definitely a useful tool to have. Happy sawing, grinding and undercutting!